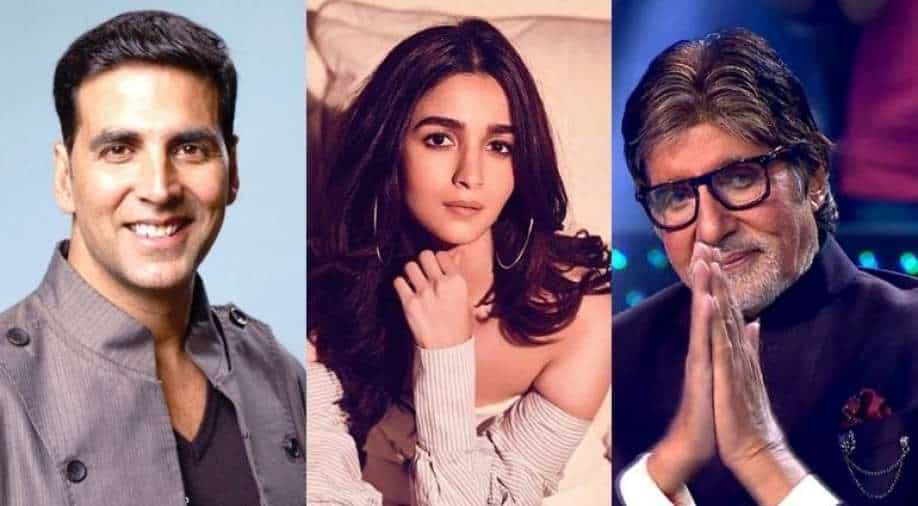 From Bollywood, Forbes Asia has highlighted a total of 13 celebrities that according to them are the biggest superstars having the power to influence the country`s teeming population.

The business media house, Forbes Asia, on Tuesday launched the list of 100 Most Influential Digital Stars on social media highlighting 100 singers, bands, film and TV stars from across the Asia-Pacific region that took the digital world by storm.

From Bollywood, Forbes Asia has highlighted a total of 13 celebrities that according to them are the biggest superstars having the power to influence the country`s teeming population. Bollywood actors Ranveer Singh, Anushka Sharma, Shah Rukh Khan, Alia Bhatt, Hrithik Roshan, Akshay Kumar and Amitabh Bachchan are considered as the thought-leaders, who have garnered millions of followers across popular platforms, with their powerful social media presence.

Here`s a quick look at the Indian stars that marked their places in the Forbes` Asia-Pacific`s Most Influential Celebrities:

1. Amitabh Bachchan:- With a strong army of 105 million followers over social media, the 78-year-old actor raised $7 million for Covid-19 relief in May.

2. Akshay Kumar:- Bollywood`s highest-paid actor with a fan following of over 131 million followers Kumar, $4 million to Covid-19 relief in India and took part in the `I for India` fundraising concert on Facebook live in May which raised 520 million rupees ($7 million) for GiveIndia`s Covid-19 fund.

3. Alia Bhatt: - Bhatt with a powerful loyal followers family of 74 million on social media, has appeared in 24 films and is one of India`s highest-paid actresses. The actor endorses at least 18 brands including Coca-Cola, Garnier and UberEats, and has started Coexist, an eco- and animal-focused website.

4. Shah Rukh Khan:- Infamous as `King Khan`, the actor has a massive fan following of over 106 million on social media. Khan appeared in about 80 films. The World Economic Forum honoured him in 2018 for championing women`s and children`s rights.

5. Ranveer Singh:- With over 62 million social media followers, Singh starred in 2018 drama Padmaavat, the 10th-highest-grossing Bollywood film ever is the recipient of multiple best actor awards. He has launched his own record label last year.

6. Hrithik Roshan:- With a strong fan base of over 33 million Instagram followers, the star appeared in May`s `I for India` concert to raise funds for Covid-19 workers; his Instagram post of the event drew over 2 million views. Roshan was also nominated for Best Actor at India`s 2019 Star Screen Awards for his role in War, the year`s highest-grossing Indian film.

7. Shahid Kapoor:- Kapoor`s movie `Kabir Singh` became the second-highest-grossing film of 2019. That year he earned nominations for Best Actor and won Entertainer of the Year at India`s Screen Awards 2020. He has a fan base of over 67 million social media followers and endorses brands like Colgate and Fanta.

8. Jacqueline Fernandez:- Fernandez, a former Miss Universe Sri Lanka, has been gaining praises all around for her latest role in the Netflix series Mrs Serial Killer. With over 46 million Instagram followers, her July endorsement of Pizza Hut`s meal-in-a-box collaboration with Pepsi garnered over three million views.

9. Katrina Kaif:- The 37-year-old actor has over a million Instagram followers. She endorses brands like Reebok and her posts score over 15 million likes. Kaif, whose real name is Katrina Turquotte, also launched her cosmetics brand Kay Beauty and also starred in Bharat, the fourth-highest grossing Bollywood film in 2019.

10. Anushka Sharma:- With over 84 million social media followers, Sharma recently turned to a film producer. Being Sharma a brand ambassador for Google Duo and Standard Chartered Bank, she also advocates for women`s and environmental causes.

11. Madhuri Dixit:- The `Tezab` actor, known for her gracious expressions and beauty, hosted an online dance class in April for her fans during the lockdown, and has a subscription-based dance app that she launched with her husband in 2013. Dixit was nominated for Best Supporting Actress at India`s 2020 Filmfare Awards for her role in the film Kalank.

12. Neha Kakkar:- The 32-year-old actor got over four million likes from her over 49 million Instagram followers to her thanksgiving post for her wedding gown, a gift from the designer. A related post for Tissot endorsement garnered over 2.5 million views. She won the Listeners Choice Song of the Year at India`s Mirchi Music Awards 2020.

13. Shreya Ghoshal:- Honoured as `Female Vocalist of the Year in 2020` at India`s Mirchi Music Awards, her song `Apni Maati` gathered over 1.5 million views on YouTube since its August release. To support Indian musicians hit by the pandemic, Ghoshal took part in a virtual concert in September which gained 95,000 likes.

Forbes Asia highlights that this unranked list came at an exceptional time to give special focus to the celebrities who, despite cancelled physical events and activities, managed to remain active and relevant on social media to interact with their fans, raise awareness and inspire optimism. Many also used their influence to help worthy causes, especially those with a Covid-19 focus.