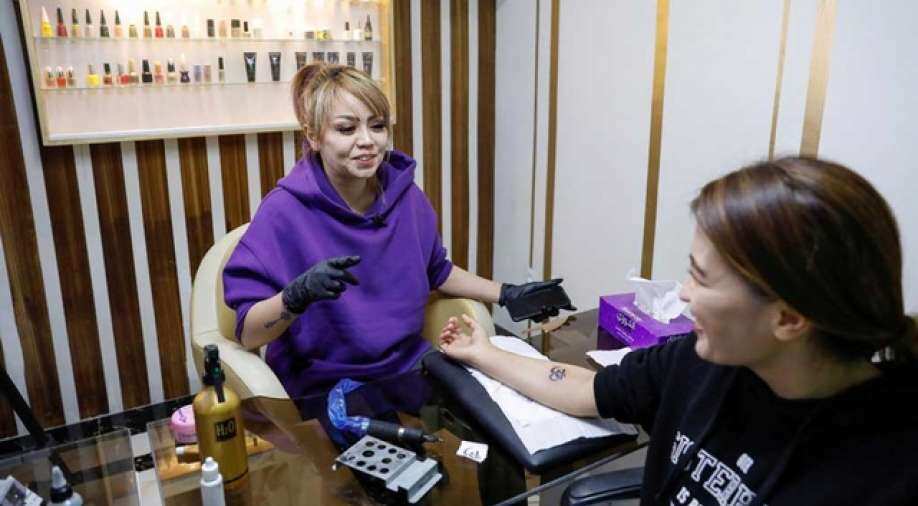 Soraya Shahidy believes she is the first female tattoo artist in a country where some religious scholars say tattoos are forbidden under Islam.

Soraya Shahidy carefully lays a stencil on Nargis Merzayi`s arm before inking the latest tattoo in her salon in Afghanistan`s capital Kabul.

A normal routine in studios around the world, Shahidy`s artwork in the conservative country breaks a tattoo taboo: she believes she is the first female tattoo artist in a country where some religious scholars say tattoos are forbidden under Islam.

"I could have performed this profession abroad but I wanted to do it in Afghanistan because there are no female tattoo artists in the country," she told Reuters. "I believe it`s not only men who can apply tattoos. Women can do it too."

Shahidy, 27, who trained in Turkey and Iran, insists her artwork is legitimate in Islam. "Some mullahs say tattoos are forbidden, but there are other mullahs who say the opposite," she said, adding that Kabul is seeing a small but growing demand from young people for tattoos.

"Most clients want tattoos on their wrists, arms, neck and legs... Girls are more interested in delicate tattoo designs such as flowers, butterflies and dragonflies, or the names of people they love. But some boys choose designs that are extravagant to me."

One client, she said, wanted a tattoo of a tombstone inscribed "volunteer of death". Shahidy`s current client, Merzayi, was long interested in getting a tattoo and finally decided to go ahead with a design on the inside of her forearm.

"My tattoo is in Hindi handwriting and it means courage," she said. Like many in the country, Shahidy thinks about the possibility of a return to power by the Taliban, who are in peace talks with the Afghan government to end two decades of war. But she expressed confidence the country has changed dramatically since the hardline Islamists were ousted in 2001.

"We are not the people who can easily lose the achievements we have gained over the recent years," she said.