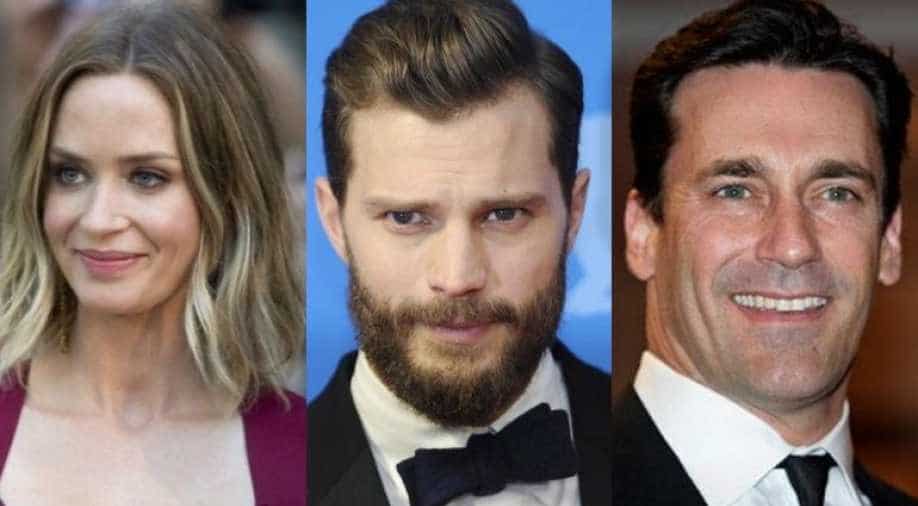 Actors Emily Blunt and Jon Hamm have been roped in to star alongside Jamie Dornan in the upcoming film' Wild Mountain Thyme'.

Actors Emily Blunt and Jon Hamm have been roped in to star alongside Jamie Dornan in the upcoming film' Wild Mountain Thyme'.

Blunt will play the role of Dornan`s star-crossed love interest in John Patrick Shanley`s adaptation of his Broadway smash hit, `Outside Mullingar`. Blunt has replaced Holliday Grainger, who was previously announced as Dornan`s co-star, reported Variety.

Details of Hamm`s character have been kept under wraps. Apart from Blunt, Dornan, and Hamm, the film also features Dearbhla Molloy and Christopher Walken.The shooting of the upcoming flick will start at the end of the month.

The romance drama, which is set in Ireland, follows Anthony (Dornan), who is always out in the fields working and is worn down by the constant belittling from his father (Walken).

His father has threatened to bequeath the family farm to his American cousin Adam (Hamm). Rosemary (Blunt) holds a grudge for having been shamed by Anthony in childhood, and the sparks between them fly.

Her mother, Aoife (Molloy), strives to unite the families before it is too late to mend the relationships.Leslie Urdang, Anthony Bregman, Michael Helfant, Bradley Gallo, Alex Witchel and Martina Niland are producing the film.Andrew Kramer, Jonathan Loughran, and Stephen Mallaghan will serve as the executive producers of the project.