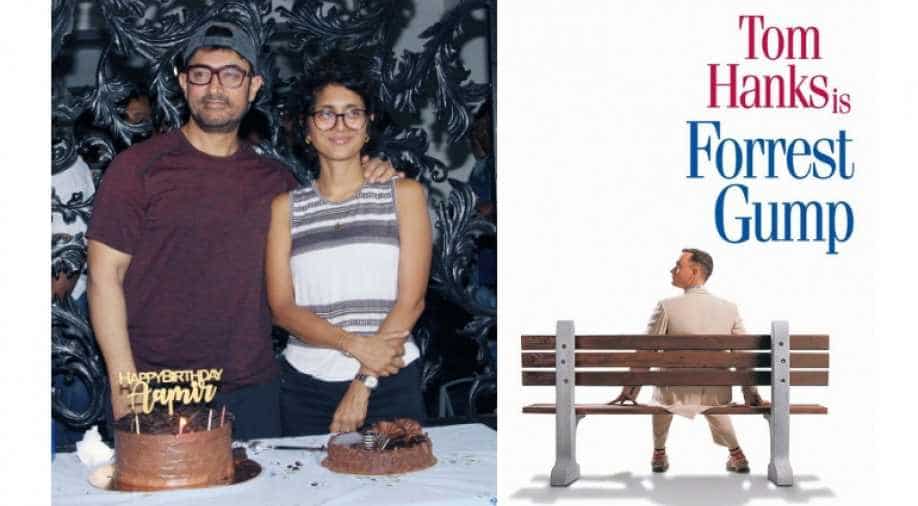 Aamir Khan poses with his wife on Thursday and a poster of 'Forest Gump' featuring Tom Hanks. Photograph:( Yogen Shah )

Aamir celebrated his birthday with a customary cake-cutting ceremony with the media persons in Mumbai on Thursday where he made the announcement about his new film.

They have been compared to each for years and now that Tom Hanks' classic 'Forrest Gump' is being remade in India, no actor other than Aamir Khan can do justice to the role. Khan, who turned 54 on Thursday, treated his fans with the announcement of his next film titled ‘Laal Singh Chadda’ which will be an adaptation of the Hollywood classic.

Aamir celebrated his birthday with a customary cake-cutting ceremony with the media persons in Mumbai on Thursday where he made the announcement.

The actor's wife, Kiran Rao was also present at the press conference held by the actor.

The film will be helmed by ‘Secret Superstar’ director Advait Chandan.

“My next film is finalised it is called ‘Lal Singh Chaddha’. It is being made by Viacom18 Motion Pictures and Aamir Khan Productions together. It will be directed by Advait Chandan. It is an adaptation of Hollywood film ‘Forrest Gump’,” he said addressing the media.“We have bought the rights from Paramount and I am playing the lead role of Lal Singh,” Aamir told reporters. Also see: On Aamir Khan's birthday, 11 films that shaped the actor's career

Forrest Gump,’ directed by Robert Zemeckis went on to win six Oscars, including best picture, best director and best actor for Hanks.The film which starred Tom Hanks and Robin Wright was based on Winston Groom’s 1986 novel of the same name. It follows Forrest Gump, a dim-witted man from Alabama, who witnesses and influences several historical events in 20th century USA.

The actor said that the makers are yet to lock the cast of the upcoming film.“We have started the prep work on the film. The shoot will start from October. I will be prepping for six months. I have to lose weight. I will be losing 20 kgs. I have to be lean and slim,” Aamir added.

The makers of the movie have not yet decided the release date of the film but are planning to release it in 2020.“I have always loved ‘Forrest Gump’ as a script. It is a wonderful story about this character. It is a life affirming story. It is a feel good film. It is a film for the whole family. It’s a wonderful film so I really like it,” Aamir added. The actor also went onto to reveal that he would be sporting a turban for some part of the film.