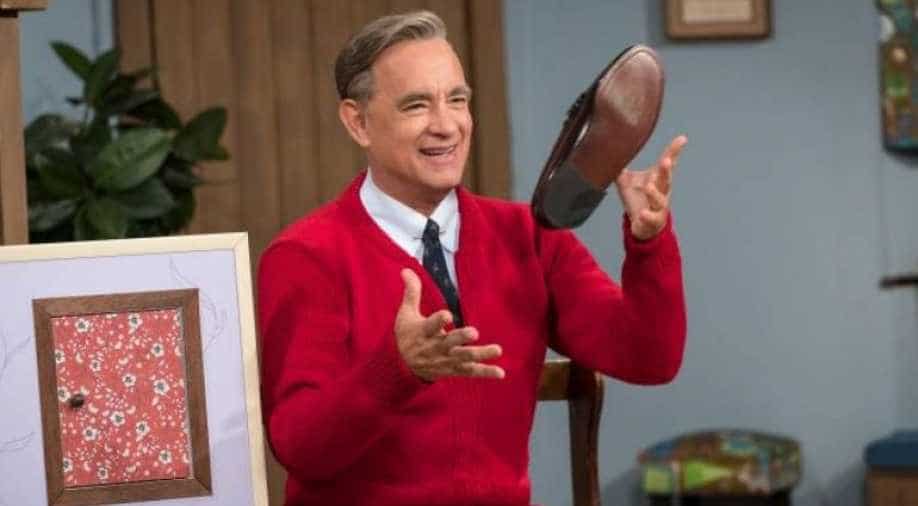 Tom Hanks in a still from 'A Beautiful Day In The Neighbourhood'. (Image via Youtube) Photograph:( Others )

The Marielle Heller directorial film is based on journalist Tom Junod`s experience profiling Rogers, which he describes as having changed his perspective on life.

Sony just dropped the trailer of the upcoming film `A Beautiful Day in the Neighborhood` starring Tom Hanks as Mister Rogers.

According to Variety, the story of the drama is inspired by a real-life friendship between Fred Rogers (Hanks) and Tom Junod (Matthew Rhys), a cynical journalist assigned to write a profile of the long-running television host.

The Marielle Heller directorial film is based on journalist Tom Junod`s experience profiling Rogers, which he describes as having changed his perspective on life.

Junod is initially sceptical about the assignment, believing that nobody could really be as wonderful as Rogers seems to be -- but, of course, the impossible turns out to be true.The two minutes 26 seconds video, opens up with Junod landing up on the sets of the show hosted by Tom.

"This piece will be for an issue about heroes," Junod`s character tells Tom in the new clip. "Do you consider yourself a hero?"He responds, "We are trying to give the world positive ways of dealing with their feelings."

"There are many things you can do," Rogers offers up. "You can play all the lowest keys on the piano at the same time."The film highlights the importance of kindness in a sceptical world.

The viewers can watch Tom stepping into the big loafers of Fred Rogers, but in this first full trailer, Hanks steps directly onto the set of 'Mister Rogers` Neighborhood' and even nails his inflection perfectly."Sometimes we have to ask for help and that`s okay," Rogers concludes in the trailer.

"I think the best thing we can do is to let people know that each one of them is precious.

"The official account of Sony Entertainment Pictures shared the official trailer on their Instagram page and wrote, "It only takes one person to inspire a world of kindness. Based on the true story, #ABeautifulDayMovie in theatres this Thanksgiving."

Heller told Entertainment Weekly that 'A Beautiful Day in the Neighborhood' was shot in the original studio in Pittsburgh where 'Mister Rogers` Neighborhood' was filmed and that the crew meticulously recreated the sets from the long-running kids show. They even borrowed items out of Fred Rogers` wardrobe. The film is slated to hit the theatres on November 22.