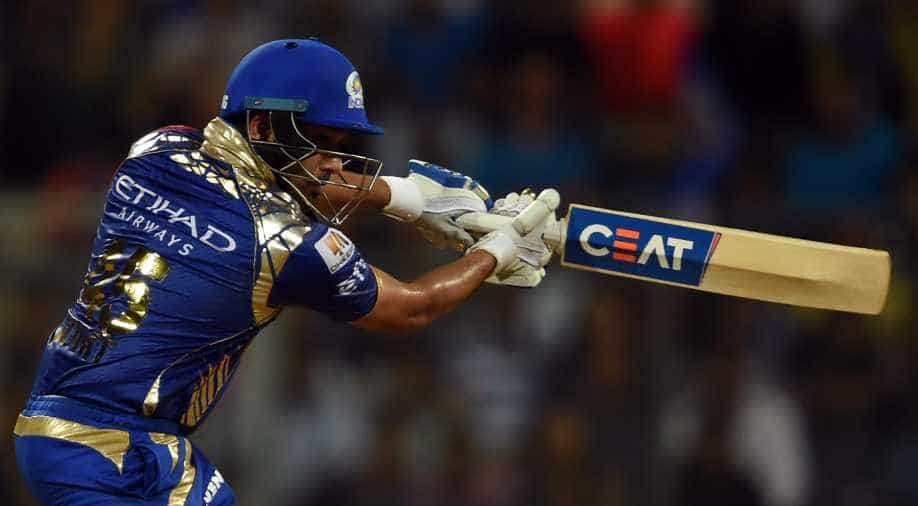 Skipper Rohit Sharma played a sublime knock to lead Mumbai Indians to a five-wicket win over laggards Royal Challengers Bangalore, ensuring themselves of a berth at the IPL play-offs, here today.

It was a rather straightforward chase for Mumbai as the home team reeled off 59 runs in the last six overs, courtesy some crisp hitting from Rohit, who ended with 56 off 37 balls.

With the win at Wankhede, Mumbai moved to the top of the points table with eight wins out of 10 games fetching them 16 points.

On the other hand, it was another disappointing performance from the star-studded RCB, who are very much out of contention for a play-off berth. The loss was their eighth in 11 matches.

Fittingly, Rohit hit the winning runs, a cracking drive past mid-off. It was one of the six boundaries he hit alongside a maximum.

The quick start to the chase was provided by Jos Buttler (33 off 21) and Nitish Rana (27 off 28) after Parthiv Patel was out for a first ball duck.

For RCB, de Villiers emerged as the top-scorer after he blasted three fours and as many sixes during his 27-ball innings, while Pawan Negi (35) and Kedar Jadhav (28) provided the late charge to take the team past the 150-mark.

RCB lost their first wicket in the fourth over when Mandeep Singh (17) went for the slog sweep and was caught by Hardik.

In the sixth over, McClenaghan removed Virat Kohli (20) when the RCB skipper flicked a slower ball straight to short midwicket and Rohit took a simple catch, reducing the visitors slipped to 40 for two.

De Villiers then blasted McClenaghan over backward point for a four before sending him over sweeper cover for a maximum as RCB scored 52-2 in the powerplay overs.

The South African gave Krunal Pandya the same treatment as RCB accumulated 13 runs off the ninth over.

De Villiers brought up the 100 with a six off Krunal over the square leg boundary but was dismissed in the next delivery by the same bowler for the fourth time in as many meetings.

Shane Watson's poor run continued and he went down cheaply again to leave RCB struggling at 108-5 in 13.4 overs.

Negi and Jadhav then steadied the innings, taking ones and twos to keep the scoreboard ticking.

Negi finally exploded in the 18th over, producing a couple of sixes off Lasith Malinga over extra cover and long- off, before smashing a six over long-on boundary in the next over to bring up the 150.

The final over yielded just five runs as McClenaghan dismissed Negi and Jadhav in successive deliveries, while S Aravind ran himself out while looking for a single.