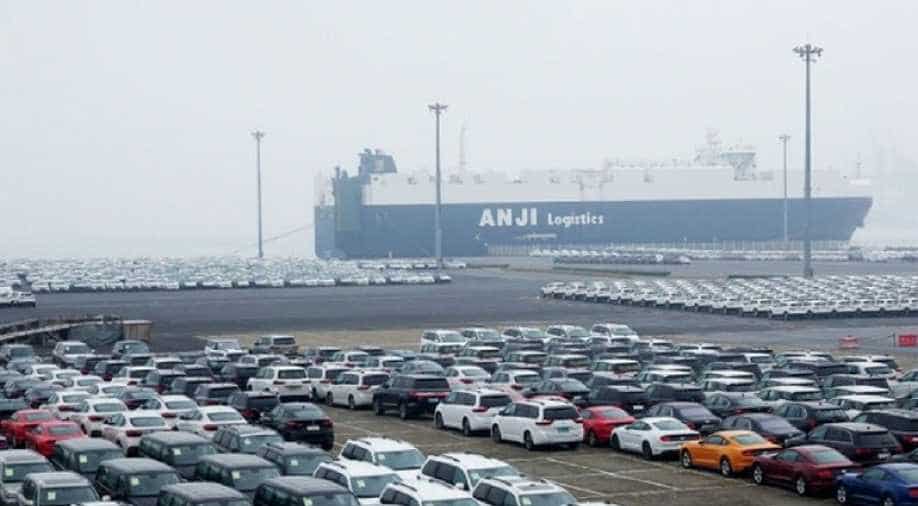 Newly manufactured cars are seen at the automobile terminal in the port of Dalian, Liaoning province Photograph:( Reuters )

The minister, Piyush Goyal, in a meeting last week asked officials from groups representing carmakers and auto parts manufacturers to review such payments with a view to reducing them, said people with direct knowledge of the discussions.

India's commerce minister has asked automakers to find ways to reduce royalty payments to foreign parent companies for use of technology or brand names, two sources said, in an effort to boost local investment and reduce outflows.

In India's competitive auto market, top-selling carmakers Maruti Suzuki and Hyundai Motor's local unit pay millions of dollars in royalties to parent companies in Japan and South Korean for using their technology and brand to build and sell cars.

The minister, Piyush Goyal, in a meeting last week asked officials from groups representing carmakers and auto parts manufacturers to review such payments with a view to reducing them, said people with direct knowledge of the discussions.

"The concern raised during the meeting was that the outflow is high, even for old technologies, and something should be done about it," said one of the sources.

The sources declined to be named as the talks are private.

The ministry did not respond to a request for comment.

India, for years, has debated imposing stricter caps on royalty payments which spiked after 2009 when foreign investment rules were eased and restrictions on such payments were removed.

The country's markets regulator last year suggested imposing curbs on payments exceeding 2% of revenue. The limit was finally set at 5% after complaints from some sectors and fears it may dissuade foreign firms from investing or sharing technology.

Recently however, Indian Prime Minister Narendra Modi's government has made a renewed push to make the country a major manufacturing hub by encouraging domestic production and curbing imports.

While India does not restrict the amount that can be paid as royalty, any payment by a locally listed company exceeding 5% of revenues needs shareholder approval.

Listed companies such as Maruti Suzuki and parts makers including Bosch, Schaeffler India and Wabco India typically pay royalties of between 1%-5% to their foreign owners.

Maruti Suzuki paid 38.2 billion rupees ($510 million) as royalty to its Japanese parent Suzuki Motor in the fiscal year ending March 31, 2020, amounting to 5% of its revenue, according to its annual report.

Privately-owned companies such as Hyundai's local unit paid $150 million or 2.6% of revenue as royalties to its South Korean parent in fiscal 2019 and Toyota Motor's India arm paid $88 million or 3.4% of revenue to its Japanese parent, government data shows.

"Depending on the form in which the government brings back such caps ... it may impact the ability of auto companies to benefit from the use of foreign brands and technical know-how," said Gupta.

He said for many foreign companies royalties are a profit repatriation strategy and changes to these could impact operating and supply chain structures from a fiscal perspective.

Maruti, Toyota and Bosch declined to comment. Hyundai, Schaeffler and Wabco did not respond to emails seeking comment.

Such payments have also been a long-standing issue with minority shareholders.