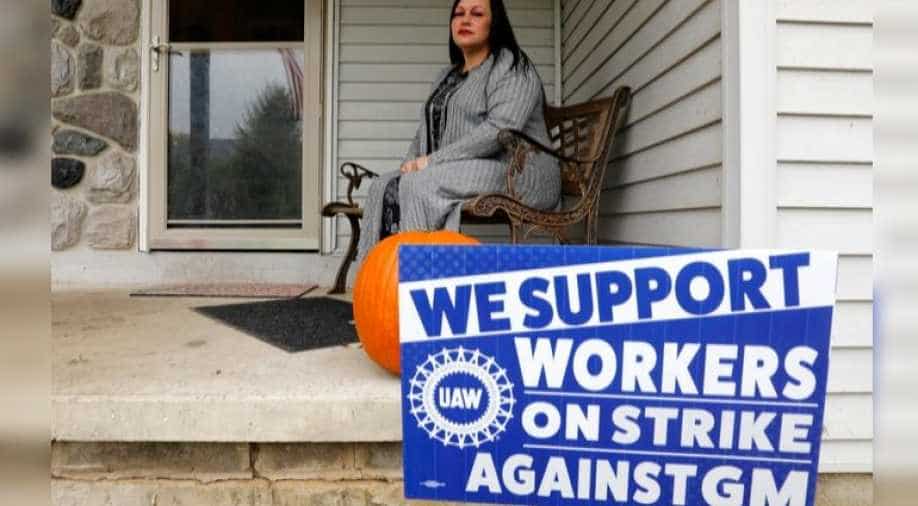 Nearly 50,000 GM hourly employees have been striking since September 16 in a walkout that has halted production at 31 factories and led to thousands of layoffs at auto supply companies.

Betty Johnson, who has worked on General Motors assembly lines in Michigan and Tennessee for more than 34 years, said she knew a strike by the United Auto Workers would mean personal sacrifice.

Nearly 50,000 GM hourly employees have been striking since September 16 in a walkout that has halted production at 31 factories and led to thousands of layoffs at auto supply companies.

"It's not easy," Johnson said. "I've got $45 left from my $250 in strike pay. I'm getting ready to hit up my 401K (retirement account) and borrow from myself," she said as she picketed outside GM's Detroit-Hamtramck assembly plant.

GM employees who are boycotting receive only $250 a week, a minuscule fraction of their normal salaries.

Johnson has already contacted the United Way, the local community organization that helps families in distress, for assistance in stretching out her utility bills and mortgage payments.

The union has urged members to contact a community information and referral services hotline and passed out cards with the corresponding phone number, Johnson said.

Credit unions supported by organized labour have also stepped forward to help some of the strikers.

"I don't see how you can feed five children on $250 a week," said Johnson, noting that many of her coworkers face even greater hardships, especially temporary employees.

The UAW says the typical GM worker at the top of the pay scale makes an average of $65,000 per year and employees with less than eight years seniority make even less.

Meanwhile, the seven per cent of GM workers classified as temporary employees make $16.50 per hour or about $33,000 per year.

Louis Rocha, president of UAW Local 5960 in a suburb of Detroit, Michigan, who works at an assembly plant where GM builds electric vehicles, said community support has been helpful.

Local 5960 runs a striking kitchen that prepares food around the clock and gives away free meals thanks to donations from local businesses, churches, community groups and ordinary people.

Pizza has been delivered free of charge to the hall every day since the strike began on September 16, he added.

Rocha even recounted the story of a local veterinarian who offered to do surgery on a family's cat for free so that they didn't have to euthanize it.

Gerald Lang, Local 5960 vice president, said he doesn't believe GM ever anticipated the broad community support the UAW has gotten during the walkout.

"There are a lot of workers pinched by corporations. Everyone who packs a lunch box sees it and knows it. They're expected to do more with less," said Lang.

Workers have been learning to economize on food, transportation and entertainment.

David Michael, a member of Local 5960, said he dropped cable television and switched to processed food.

"I buy gas by the gallon rather than filling it up," said Michael, who has dipped into savings to cover his bills.

Diana Reed, who has worked for GM for 20 years and is also a member of Local 5960, said she's begun combing her house for belongings to sell on an online marketplace.

A single mother with five sons, Reed said her three oldest have jobs and are helping with household bills while her youngest two, both at university, took the semester off to save money since she pays their tuition.

"Do I feel bad? Yes. But it's a concession we had to make," Reed said.

"It's hard for people to save for something like this," said Reed, who notes that most workers with children live paycheck to paycheck.

"I had to put down my pride and that was hard. The big thing that made me put that down was thinking about my boys," she said.