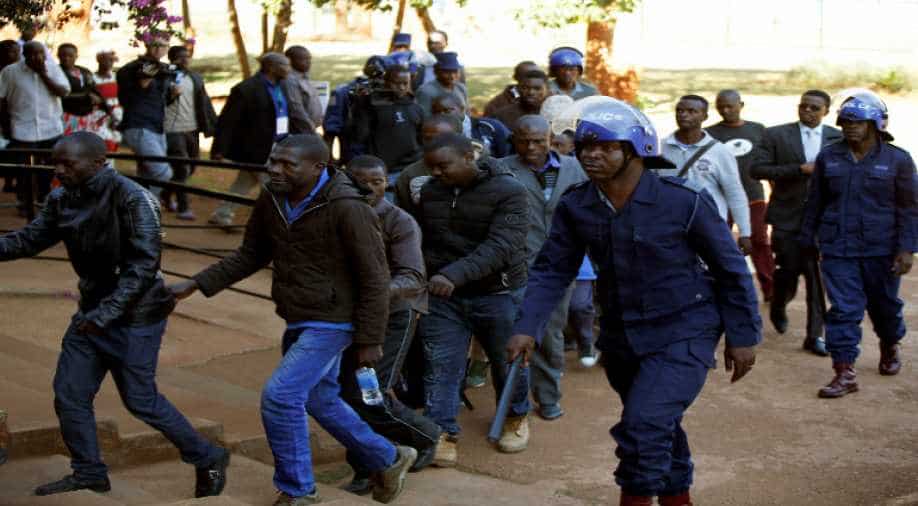 Some of the 16 people detained after police sealed off the building of Opposition Movement for Democratic Change (MDC) on Thursday, appear in court in the capital Harare, Zimbabwe, August 4, 2018. Photograph:( Reuters )

A crackdown last week on protests in Zimbabwe is a foretaste of how the government will respond to future unrest, the president's spokesman said, fuelling concerns that the country is reverting to authoritarian rule.

"(The) government will not stand by while such narrow interests play out so violently. The response so far is just a foretaste of things to come," said President Emmerson Mnangagwa's spokesman George Charamba.

Charamba told the state-controlled Sunday Mail newspaper the government would review some provisions of the constitution adopted in 2013, which he said were being abused by proponents of democracy.

Lawyers and activists say hundreds of Zimbabweans were detained last week accused of public order offences, including at least four lawmakers from the opposition MDC party and Evan Mawarire, a pastor who rose to prominence as a critic of former leader Robert Mugabe critic and led a national shutdown in 2016.

Local rights groups say security forces, accused of night raids at homes of suspected protesters, are now trying to track down people who have gone into hiding.

A partial internet blackout was still in force on Sunday, two days after mobile networks sent messages to customers saying they had been ordered to keep social media sites shut until further notice.

When he was elected in July, Mnangagwa promised a clean break with the 37-year rule of Mugabe, who used the security forces to quell civilian protests before being forced out in a de facto coup in November 2017.

But the MDC says former Mugabe ally Mnangagwa is now overseeing a reversion to authoritarian rule by using the same tactic.

Charamba, who is on an official trip with Mnangagwa to Azerbaijan, said the MDC leadership and affiliate organisations would be "held fully accountable for the violence and the looting." The MDC denies fomenting unrest.

U.N. rights officials denounced last week's crackdown, while an independent inquiry found that the army used excessive force when it stepped in to stop post-election violence last August, during which six people were shot dead.

Zimbabweans, who have seen their purchasing power eroded by soaring inflation, also say Mnangagwa has not delivered on pre-election pledges to kick-start economic growth after Mugabe's exit.