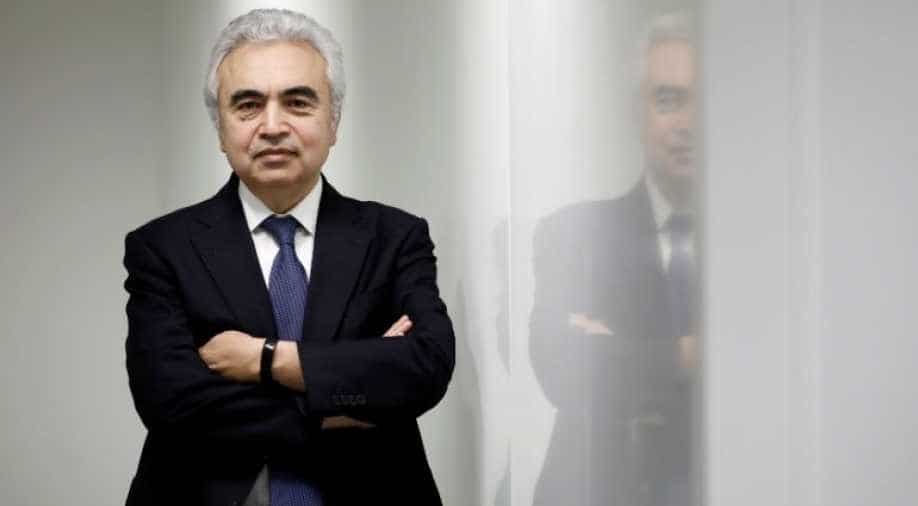 IEA officials also say there is also some wishful thinking about how quickly the transition to cleaner energy could happen.

A short walk from the Eiffel Tower, Fatih Birol oversees the world’s energy watchdog, whose analyses of fuel demand have long been viewed as the gold standard by government officials, energy executives and investors.

But now, the Turkish economist and the International Energy Agency (IEA) he heads are facing mounting pressure from groups concerned about climate change – including investors, scientists and former United Nations diplomats - over the organisation's widely watched annual outlook.

The World Energy Outlook, due to be published Wednesday, shapes expectations among governments, companies and investors over the future use of coal, oil and gas.

The critics say it underplays the speed at which the world could switch to renewable sources of energy. The result, they say, is to bolster the case for continued investment in fossil fuel companies, undermining the fight against climate change.

"The IEA is effectively creating its own reality. They project ever-increasing demand for fossil fuels, which in turn justifies greater investments in supply, making it harder for the energy system to change," said Andrew Logan, senior director of oil and gas at Ceres, a US non-profit group that promotes environmentally-friendly business.

Senior IEA officials say they share concerns over climate change but defend their organisation's work, saying the criticism is based on a misunderstanding of what the World Energy Outlook intends to show. They say the goal of the publication is to help governments assess the likely consequences of existing energy policies, not forecast what the world’s energy system will look like decades into the future.

The IEA, which is mainly funded by industrialized nations including the United States, Germany and Japan, advises governments on energy policy.

“If they criticise us, the only option that comes to my mind is that they don’t know exactly what we are doing,” said 61-year old Birol during an interview at the IEA’s headquarters in Paris last week. “They must be misunderstood, or they must have been misled.”

IEA officials also say there is also some wishful thinking about how quickly the transition to cleaner energy could happen.

"A lot of times people want to believe there's some simple lever that you push: 'change the IEA and the world will be better," said David Turk, who had been a senior climate official in former US President Barack Obama’s administration and now heads the IEA's strategic initiatives office.

The IEA has long faced criticism from other energy analysts who say the outlook has failed to capture dramatic falls in the cost of solar power. Tim Buckley, a Sydney-based analyst at the Institute for Energy Economics and Financial Analysis think tank, said the cost in the United States had fallen to below $40 per megawatt-hour this year but the last World Energy Outlook implied a current figure closer to $90.

The IEA says much of the dramatic expansion of the solar industry has been driven by policy changes in China, which the outlook was not designed to predict, and that projections in other areas had proved accurate.

The increased scrutiny of the World Energy Outlook shows how the once esoteric subject of energy modelling is becoming a focus of the mainstream investment community as worries over climate change intensify.

Concerns among fund managers about the implications for their investments escalated after the world’s climate scientists issued a landmark U.N.-backed report late last year offering a stark assessment of the likely consequences of rising global temperatures.

The report said the worst effects could be averted by limiting the temperature increase to 1.5 degree Celsius above the levels of pre-industrial times. That target is the most ambitious goal of the 2015 Paris Agreement, the global pact to curb global warming.

Birol was instrumental in developing the models used to compile the World Energy Outlook during his previous role as the agency’s chief economist. The outlook is published each year with a different cover featuring the yellow and red colours of Birol's favourite soccer club, Istanbul-based Galatasaray.

The publication’s main report, or scenario, maps how demand for different forms of energy would evolve over the next couple of decades based on existing government policy commitments. Some critics say that because it doesn’t take account of the likelihood that governments will take more drastic action to curb emissions, it means projections will inevitably be conservative.

IEA officials emphasised that the outlook is not a forecast, rather it explores the implications of existing policies, which is made clear in the introduction.

Another scenario, called the Sustainable Development Scenario, aims to show how the global balance of renewable energy and fossil fuel would need to change to meet the temperature goals of the Paris accord, cut air pollution and expand access to electricity for the world’s poor.

Investors and climate activists are lobbying Birol to include a scenario that uses the most ambitious Paris Agreement target of a 1.5 Celsius increase. In the last outlook, the Sustainable Development Scenario implied warming of about 1.7 to 1.8 degree Celsius.

Investors say using the more ambitious target could spur a faster switch to renewables by showing the financial markets a path for meeting the goal.

Among those pressing Birol for that change is a group of institutional investors representing $30 trillion of assets under management, called the Institutional Investors Group on Climate Change.

In a previously unreported letter sent to Birol earlier this year, the group said that appropriate scenarios are important to institutional investors for understanding their exposure to climate risks and deciding how to allocate capital. The IEA’s scenarios “materially impact expectations for future investment returns,” the investors wrote.

Birol, who downplays the extent to which the outlook guides investment decisions, said the next World Energy Outlook takes the latest findings of climate science into account. The IEA in comments on its website last month said that it will explore a path with a 50 per cent chance of stabilising warming at 1.5 degree Celsius without relying heavily on still early-stage techniques for sucking carbon from the atmosphere.

The Sustainable Development Scenario will be “more stringent” than in the previous outlook, Laura Cozzi, the IEA’s chief energy modeller, told Reuters. IEA officials said it was very challenging to model a scenario of a 1.5 degree Celsius rise given the amount of existing fossil fuel infrastructure.

The letter also urged Birol to make clear that the outlook’s main scenario, which had been called the New Policies Scenario and reflects governments’ existing climate pledges, is a “business as usual scenario” that would lead to a rise of between 2.7 and 3 degree Celsius.

In the comments on its website, the IEA said it would rename its main report the Stated Policies Scenario to clarify it reflected existing commitments.

The groups pushing for change welcomed the name change but said they would study the new outlook when it is published to reach firmer conclusions.