Women's March: Women in 'pussyhats' lead protests across US 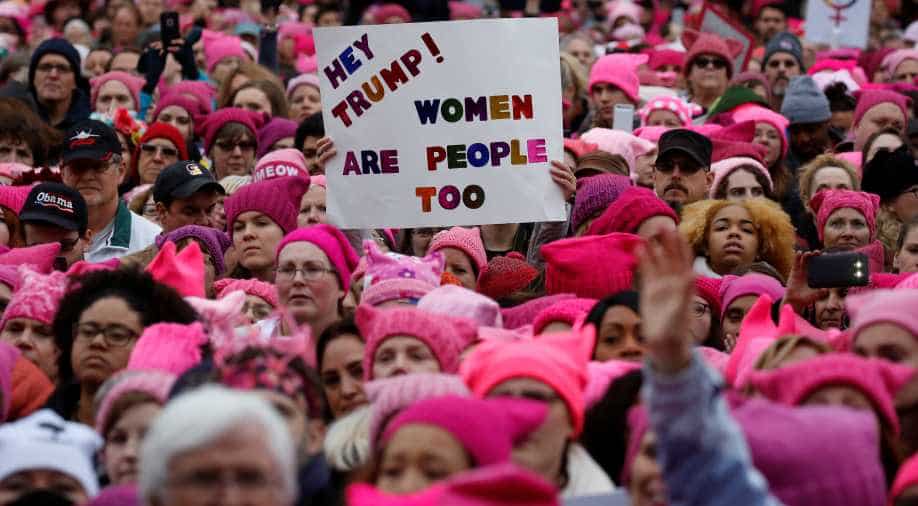 Led by women in pink "pussyhats," hundreds of thousands of people packed the streets of Washington and other cities Saturday in a massive outpouring of defiant opposition to America's hardline new president, Donald Trump.

Roused by fiery speeches, the women sent out a resounding message of resistance and activism the day after Trump took office with a vow to roll back the policies of former president Barack Obama.

"I know that we can do better, we have to fight for the change we want to see," said Michelle Phillips, a 45-year-old recent American citizen, who told AFP she came to take a stand against what she called Trump's "platform of hate and bigotry."

The call was heard far beyond US shores, with organisers saying over 2.5 million people signed up online to take part in one of more than 600 marches being held worldwide.

One of the largest was in London, where tens of thousands of women, men and children marched chanting "Dump Trump" and waving banners "Our Rights Are Not Up For Grabs - Neither Are We."

Organizers estimated the turnout for the main "Women's March on Washington" at half a million, double initial expectations.

By 11 am, the city's Metrorail system said it had moved 275,000 people, more than most weekdays and eight times a typical Saturday.

The tide of women in knitted pink hats appeared to dwarf the throngs of Trump supporters in red "Make America Great Again!" caps who the day before had cheered the Republican's swearing-in.

Trump's defeated rival Hillary Clinton tweeted her support to the crowds massed around Washington's National Mall, as actresses, feminists and liberal politicians took the stage to vow resistance to Trump.

"Thanks for standing, speaking & marching for our values, @womensmarch. Important as ever. I truly believe we're always Stronger Together," she said.

Former secretary of state John Kerry was spotted in the crowd -- a day after leaving office -- with his dog on a pink leash.

Women made up the overwhelming majority of the people who arrived in Washington, hooting and cheering on jam-packed trains and buses.

Many carried homemade signs. "Keep your tiny hands off me," said one. "Rise, Love, Resist," read another.

Trump -- and his new administration -- were feted at balls after an inaugural speech that painted a grim vision of national decline under his Democratic predecessor Barack Obama, punctuated by the new president's vow to stop "this American carnage."

For his first full day in the world's most powerful office, Trump attended a multi-faith service at Washington National Cathedral. He was later due to visit the headquarters of the CIA, an agency he feuded with bitterly before taking office.

His first act in office -- signing an executive order aimed at freezing Obama's signature health care law -- was a potent gesture in that direction, with more such actions expected to follow on Monday.

But if Friday was Trump's day -- marred by sporadic outbreaks of vandalism and more than 200 arrests -- Saturday belonged to demonstrators with fresh memories of his fat-shaming a former beauty queen, sex assault allegations and a controversial stance on abortion.

The knitted "pink pussyhats" they wore were an allusion to his boasts in a leaked videotape of grabbing women's "pussies" with impunity.

Actress Scarlett Johansson urged: "I feel that in the face of this current political climate it is vital that we all make it our mission to make it very, very personal."

Filmmaker Michael Moore, a march organizer, noted that his copy of the Washington Post was bannered with the headline "Trump Takes Power."

"I don't think so. Here is the power," he said, gesturing to the crowd.

TV actress America Ferrara told the crowd, "The platform of hate and division assumed power yesterday. But the president is not America. We are America. And we are here to stay."

"It's important we assert our majority and we have a large physical presence to show Trump and the Republicans that they cannot railroad our country," she said.

While Trump won 42 percent of the women's vote, millions who did not vote for him worry that gender rights and other progress on women's health, contraception and abortion could be chipped away.

The Women's March began with a simple Facebook post from Hawaii grandmother and retired lawyer Teresa Shook to about 40 of her friends -- but word travelled quickly and the event took on a life of its own.

Dozens of progressive groups backed the march, as well as Amnesty International and Planned Parenthood, the women's health care provider that is a Republican target because of the abortion services it provides.