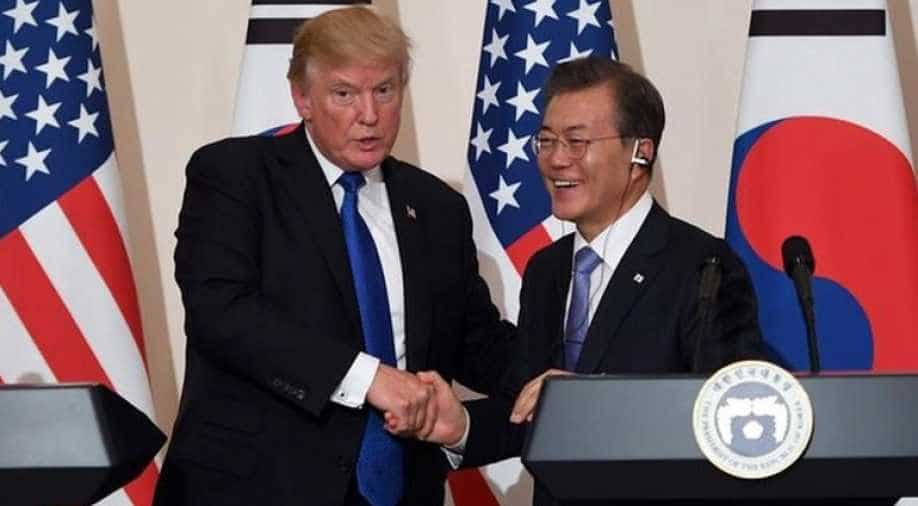 South Korean President Moon Jae-in Thursday told Donald Trump that he plans to send a special envoy to Pyongyang, his office said, the latest in the Olympic-driven detente between the two Koreas.

An intense rapprochement saw the two Koreas march into the Games opening ceremony together behind a unification flag, and Moon shared a historic handshake with North Korean leader Kim Jong Un's sister Kim Yo Jong.

"In response to the visit by North Korea's special envoy Kim Yo Jong, ... Moon conveyed to Trump his plans to dispatch a special envoy to the North soon," Seoul's presidential office said in a statement following their phone conversation.

The two presidents also "agreed to maintain the momentum in inter-Korean dialogue and to continue efforts so it leads to the denuclearisation of the Korean peninsula," it said.

Moon has sought to use the Pyeongchang Winter Olympics that ended Sunday to open dialogue between Washington and Pyongyang in the hopes of easing a nuclear standoff that has sparked global security fears.

Pyongyang mounted a charm offensive during the Games, sending athletes, cheerleaders and high-level delegations following months of tensions over its nuclear and missile programmes.

Moon, who advocates dialogue with the North to defuse tension, said on Monday that Washington needs to "lower the threshold for talks" with the North.

In a meeting with North Korean General Kim Yong Chol on Sunday, Moon also urged the North to open dialogue with the US as soon as possible -- to which Kim responded by saying the North was "very willing" to hold talks.

But the US has ruled out any possibility of talks before Pyongyang -- which last year staged multiple missile and nuclear tests -- takes steps towards denuclearisation.

There was no known interaction between the North and the US during the Games and Washington last week imposed what Trump described as the "heaviest ever" sanctions on the isolated regime.