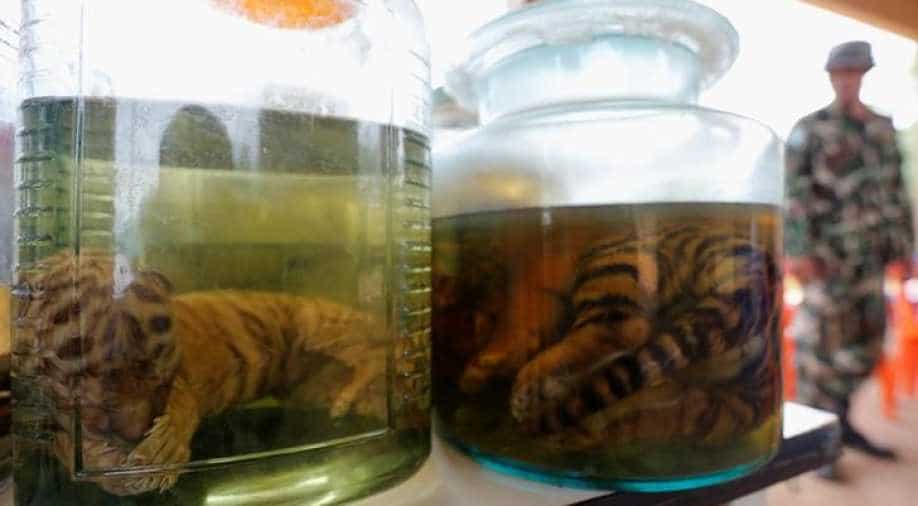 Follow Us
Thai police have charged 22 people, among them 17 members of the Tiger Temple including three Buddhist monks, who tried to flee with a truckload of tiger skins. They were charged on acts related to wildlife trafficking and possession. The police removed more dead animals including a bear and a leopard, Adisorn Nuchdamrong of the country's department of national parks said today.

The temple in Kanchanaburi province, west of the capital, Bangkok, has been a major tourist attraction for more than two decades, with visitors paying 600 baht ($17) admission to pose for photographs with the tigers.

Wildlife activists have accused the temple of illegally breeding the tigers while some visitors on online forums complained that the tigers appeared sedated.

The temple denies the accusations.

It followed the grim discovery on Wednesday of the bodies of 40 tigers cubs inside a freezer.

It remains unclear why the dead tiger cubs were being stored, though tiger bones and body parts are used in traditional Chinese medicine.

"We've confiscated all the hard disks of closed circuit cameras in this temple for police to find evidence of wrongdoing," Adisorn said.

The temple officially opened in 1994 close to a wild tiger habitat. It received its first tiger cub, which had been found by villagers, in 1999.

The cub died soon after but villagers kept bringing cubs to the temple, usually when the mothers had been killed by poachers, the temple said.

Repeated efforts to shut down the temple have been blocked by the monks.

Thailand is a well-known trafficking hub of illicit wildlife products, including ivory.

Thailand's wildlife department began raiding the temple on Monday. There were 137 tigers inside the temple and 119 have been removed.

The World Wildlife Fund said in April that the number of wild tigers in the world stands at around 3,890, with more than 100 wild tigers in Thailand.