Why is Switzerland holding a referendum to purchase fighter jets? 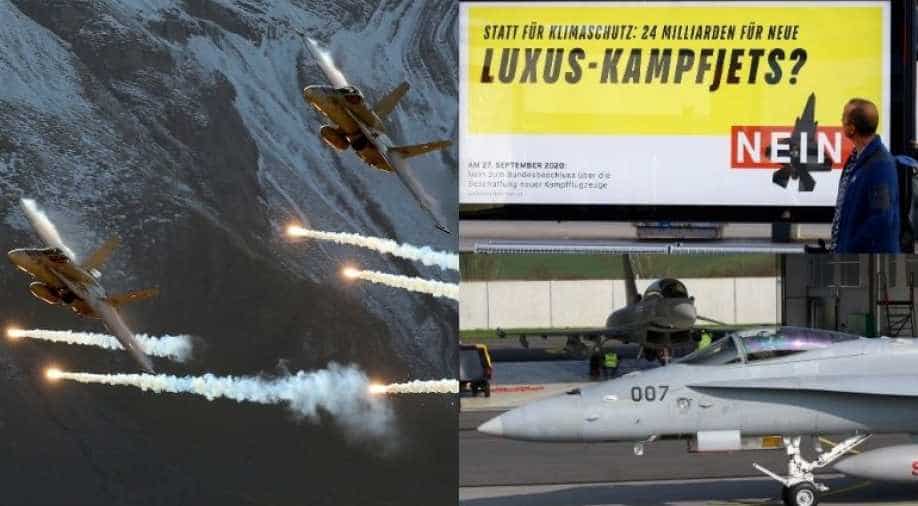 A poster against the acquisition of new fighting jets for the Swiss Air Force along with fighter jets Photograph:( Reuters )

Many oppose the idea, saying the neutral country neither can afford nor needs cutting-edge warplanes to defend Alpine territory which a supersonic jet can cross in 10 minutes.

Switzerland, which last fought a foreign war more than 200 years ago and has no discernable enemies, wants to spend billions on new fighter jets.

Many oppose the idea, saying the neutral country neither can afford nor needs cutting-edge warplanes to defend Alpine territory which a supersonic jet can cross in 10 minutes.

Ireland, Malta and Luxembourg don't have jets, they say, making the $6.6 billion plan a waste of money.

"Who is our enemy? Who is attacking a small, neutral country, surrounded by NATO?" asked Priska Seiler Graf, a member of parliament for the left-leaning Social Democrats. "It's really absurd."

Voters get their say on Sunday September 27. Approving funding in the binding referendum would let the government decide next year among the Eurofighter from Airbus, the Rafale from France's Dassault, Boeing's F/A-18 Super Hornet, or the Lockheed Martin F35-A Lightning II.

The aircraft would replace Switzerland's aging fleet of 30 F/A-18 Hornets which will go out of service in 2030.

Seiler Graf said cheaper alternatives, such as a fighter version of Leonardo's M346 trainer, offered better value than the "expensive toys" under consideration.

"We need new aircraft, that is not disputed, but buying lighter, simpler aircraft would be enough," she said. "It would be better to have a Fiat than a Maserati."

Voters six years ago rejected the purchase of Gripen jets from Sweden. In 1989 a proposal to scrap its entire army got 35% of voter support.

Pollster Lukas Golder from GFS.Bern said voters are likely to back the plan to buy the jets. Armed neutrality is crucial to how Switzerland defines itself, he said, going back to the belief a strong army deterred invasion by Nazi Germany in World War II. The Pope's Swiss guards are also a reminder of the country's mercenary past.

Lawmaker Thomas Hurter from the right-wing Swiss People's Party, a former air force pilot, said Switzerland had to protect itself without relying on other countries.

"If we don't replace these old aircraft, that means we have no air force, there is no protection any more and we are not fulfilling our constitution," he said.

Smaller jets could not fly high enough, he said, or have the acceleration needed to react quickly to emergencies.

"We don't know what's going to happen in the next 50 years," Hurter said. "You need to have the fire brigade ready when there is a burning house, otherwise it's too late."