What is the real story behind China's $400 billion deal with Iran? 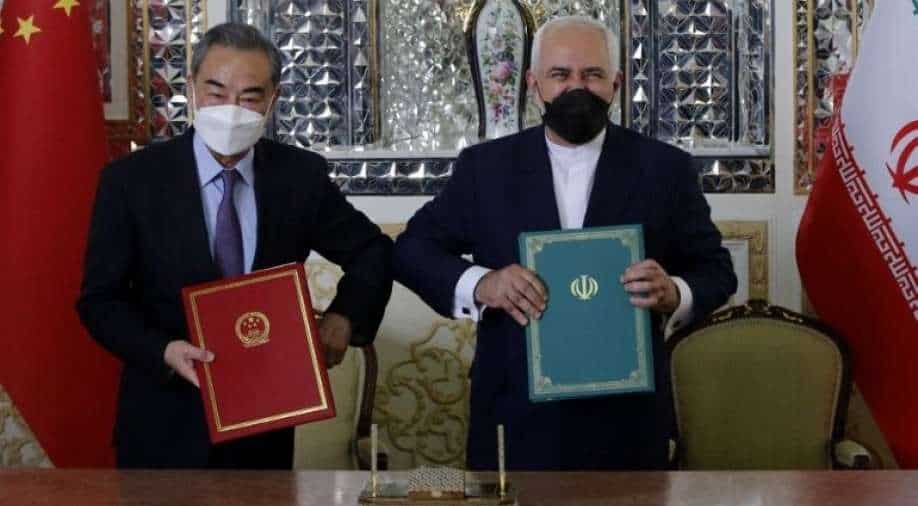 Iranian Foreign Minister Mohammad Javad Zarif and his Chinese counterpart Wang Yi, pose for a picture after signing an agreement in the capital Tehran, on Saturday. Photograph:( AFP )

China will invest 400 billion dollars in Iran. This will be spread out over the next 25 years. Where is the money going?

Iran is rich in oil. It is at loggerheads with Arab nations and Israel. It is under scrutiny for its nuclear programme. Western nations had signed a deal, Trump walked out of it. Biden wants to re-enter it. But as Washington drags its feet, China has swooped in.

China has inked a 25-year agreement with Iran. It's a $400 billion deal. It could be a gamechanger.

And China's plan is not limited to Iran. The Chinese foreign minister is touring West Asia. He has many stops. What is China planning to do in the region? What does it mean for US efforts to revive the nuclear deal? What does the investment mean for Iran?

And what about India - which has invested millions of dollars in the Chabahar project?

Let's start with the agreement. It was signed on Saturday. Chinese Foreign Minister Wang Yi was in Tehran. He met with all key stakeholders including Iranian President Hassan Rouhani.

This is a sweeping agreement. Beijing and Tehran have not shared the details yet. Reports say it is broadly based on an 18-page draft that had leaked last year. We reported this last year too.
China will invest 400 billion dollars in Iran. This will be spread out over the next 25 years. Where is the money going? Banking, telecommunications, ports, railways, healthcare and information technology.

China will invest across sectors. What does it get in return? Oil. A lot of oil..
Iran is the world's fourth largest oil producer. It holds 10 per cent of the world's proven oil reserves. Reports say China will receive a "regular and heavily discounted" supply of Iranian oil. It's a win-win for both sides.

Remember, both China and Iran face sanctions from America. So they've signed this deal. And it goes beyond economy. This is a strategic pact.

Last year's draft had indicated a military relationship between Iran and China. It had called for "deepening military cooperation" This included joint training and exercises, joint research and weapons development, and intelligence sharing.

So, going by the words of the Iranian foreign ministry spokesman, this is a "complete roadmap". It details how Iran's relationship with China could evolve in the next 25 years. The agreement itself is worth 400 billion dollars. It brings Iran into China's Belt and Road Initiative. China is in it for the long haul.

"Our relations with Iran will not be affected by the current situation. They will be permanent and strategic. Iran's foreign minister Mohammad Javad Zarif called China "a friend for the hard times".

Both sides are already working together on various fronts. One is oil: China imports more than 300,000 barrels of Iranian oil every day. With this agreement, China will import more.  The second area is technology.

Earlier, Swedish company Ericsson was building Iran's 5G network. It had to exit because of sanctions.

Guess who entered? Chinese tech giant Huawei. It has replaced western companies in Iran. It is apparently shipping American-made computer equipment to Iran. It is said to be running a local franchise. And it is developing Iran's 5G network. The cooperation is set to expand.

How does the US see this? President Joe Biden was asked this question. Biden says he is concerned about Iran getting close to China. The question is: what does he plan to do about it?

China is making inroads into West Asia. Before landing in Tehran, the Chinese foreign minister had already visited Saudi Arabia and Turkey. After Iran, he visited the UAE and Oman.

Coming back to iran, the deal with Iran has come as yet another reminder of China's great game in West Asia. It may be a newcomer to the region. But it has increasingly widened its footprint. And in some aspects, outflanked Western influence. Because the Chinese outreach has been arguably subtle and careful. For a change, Beijing is not trying to gain control through its army. It is creating a culture of economic inter-dependence.
In 2008, West Asia received only 1% of the money China had invested globally. Today Chinese money is flowing all over the region, from Saudi Arabia to Iran. From the UAE to Turkey, and from Palestine to Israel. Chinese companies have increasingly filled the economic vaccum left by the West in recent years.
They have invested in refineries, ports, airports, hotels, offices and business campuses. How could this change the geopolitical dynamics of West Asia? And challenge Western influence in the region?

In 2016, China published the 'Arab policy paper', its first political strategy document for West Asia.
A blueprint to slowly unfurl its tentacles in the region. This paper helped sync Chinese interests with West Asia's development strategy. Beijing wanted oil, natural gas and influence. Arab countries were looking to modernise and diversify their economies.

The result was this: By 2017, China had become the largest investor in West Asia, outmanoeuvring the United States. And the biggest importer of crude oil, with half of its oil coming through West Asia.

In 2016, China's Sinopec and Saudi Arabia's Aramco agreed to jointly build a refinery worth 10 billion dollars.

And in Kuwait, Sinopec was involved in the construction of the largest refinery in West Asia. Several joint infrastructure projects were also launched under the Belt and Road Initiative. Like the Khalifa port in UAE, the Hunutlu thermal power plant in Turkey, the Jizan port in Saudi Arabia, the Attarat oil power plant in Jordan, port Said in Egypt and the Duqm port in Oman along the strategic Strait of Hormuz.

The pandemic further provided China a chance to strengthen its foothold in West Asia. Chinese vaccines have been flowing into Arab countries. In February, China promised to provide vaccine aid to Palestine, and on Sunday, China and the UAE agreed to expedite production of affordable Sinopharm vaccines.

But Chinese interest is not just limited to the Arab world or Islamic countries.

Now, by inking a 25-year agreement with Iran, Beijing has made it amply clear that it is not trying to replicate Western strategy in West Asia.

Instead, it is putting forward a narrative of neutral engagement with all countries. It is trying to build a multi-polar order based on economic partnerships. Not only could this shape West Asia's political dynamics based on how China envisions it, but it could significantly erode the influence of American and European powers.

West Asia is the final frontier for global powers. If you have a foothold in West Asia, you have arrived on the international scene.

There are two reasons for this. One: oil.
30% of the world's crude output comes from here. West Asia is the world's gas station. It is where countries go when they need a top-up. They have waged wars over a sniff of petroleum. Which brings us to the second reason: Power plays.
West Asia is the land of proxy wars. Domestic groups are inevitably backed by regional powers. And these regional powers are backed by superpowers. Yemen is probably the biggest example.

So for countries with global ambitions, West Asia is a geopolitical board game. Which brings us to India and China.

Both countries have global ambitions. The Iran deal is China's bugle call. It has officially entered the arena.

But what does it mean for India? Where does the deal leave India and its strategic interests?
Look at where India stands right now. It has maintained excellent ties with the region. The cornerstone of this relationship is neutrality.

India is not party to the West Asian cold war. For India, both Iran and Saudi Arabia are key partners. And for a region that has been invaded, colonised and subjected to years of foreign interference. Neutrality is a welcome change.

But in 2015, the Ministry of External Affairs made an important clarification. India's neutrality in West Asia must not be confused with passivity. As a developing economy, India's biggest concern is oil.

Before American sanctions, Iran supplied 10% of India's oil needs. In 2019, the trade was halted. Donald Trump brought the hammer down on Iran. India had no option but to comply. But Trump is not president anymore. His successor is a more conventional politician. Joe Biden helped seal the Iran nuclear deal in 2015. And he intends to save it at all cost. If Biden lifts the sanctions on Iran, the oil trade will resume. But he's unlikely to do it. Biden wants Iran to comply with the agreement first. Tehran says, remove the sanctions,  and then we'll see.

So the sanctions aren't disappearing overnight. Plus there's an election around the corner in Iran. The hardliners are eyeing the presidency. If they win, chances are, the deal will be abandoned. Which brings us back to China. Like most Chinese partners, Iran needs Beijing's cheque book. Not its brotherhood. The moderates in Iran are desperate to revive the economy. It's the only way they are going to win the elections. And China is willing to pay.

Iran and China are not natural partners. What unites them is their hatred for the Americans. Not exactly what you call shared interests. It's a fragile partnership.

And India should be mindful of this. New Delhi can utilise this thaw in US-Iran relations. It is the perfect opportunity to double down. But before that, the Chabahar port must be completed.

The port is india's trump card in Iran. The shipping minister says full-scale operations will start by May. India is developing two terminals in exchange for a decade of operational rights. Chabahar is India's route to Central Asia. It bypasses the hassle of dealing with Pakistan. Last year,  the port was used to send 75,000 tonnes of wheat to Afghanistan.

When locusts invaded Iran, India dispatched 25 tonnes of pesticide. Again via the Chabahar port.
This is all part of India's Central Asia outreach. A region sandwiched between China and West Asia...

A robust Indian presence here will be key to stemming China's rise.

Here's the first thing you need to know about Central Asia. The land is criss-crossed by pipelines. It is a major transit zone. A link between oil producers and oil consumers. The international north-south transport corridor aims to build on this. India, Iran, Russia and 10 Central Asian nations are part of the project. The vision is a 7,200 kilometre long network of roads, rail and waterways. All indications are that the great game is back.

But this is the 21st century edition. There are new players and India is one of them.

Central Asia isn't uncharted territory for India. Since the 3rd century, trade has been common. Both regions were key stops in the Silk Route. Not just goods, even Buddhism spread across the Hindu Kush.

The peoples of Central Asia and India were always friends. They just need to rekindle their relations. But time is of the essence. Central Asia is key to China's Belt and Road Initiative. Its leaders are enthusiastic about it. Not because of the economic prospects but the scope of corruption. On the ground - anti-China sentiments are brewing.

If Central Asia mobilises against China, it could block Beijing's road to West Asia.