May to ask MPs for more time on Brexit talks 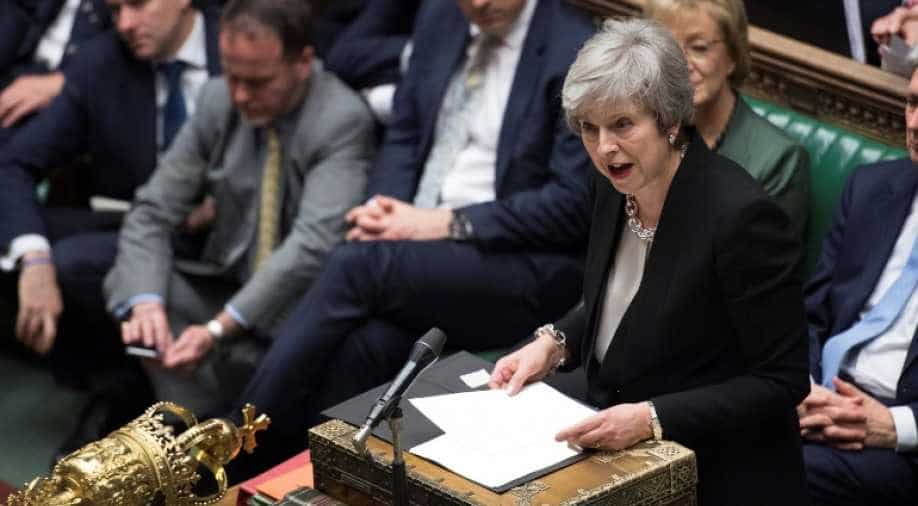 Prime Minister Theresa May attends a debate on Brexit 'plan B' in parliament, in London, Britain, January 29, 2019. Photograph:( Reuters )

May is set to update parliament on her latest meetings in Brussels and Dublin aimed at securing a divorce agreement with the EU, with Britain due to leave the bloc on March 29.

Prime Minister Theresa May on Tuesday will plead with MPs to give her more time for talks with EU officials on her Brexit deal, telling them they must hold their nerve.

May is set to update parliament on her latest meetings in Brussels and Dublin aimed at securing a divorce agreement with the EU, with Britain due to leave the bloc on March 29.

"The talks are at a crucial stage," May will say, according to extracts from her statement to parliament released in advance by her Downing Street office.

MPs last month overwhelmingly rejected the deal struck between May and Brussels and the British premier has since been attempting to secure changes that would satisfy parliament's lower House of Commons.

Brexiteer MPs in her Conservative Party are particularly unhappy with the so-called backstop provision intended to keep the border with Ireland free-flowing.

Some fear it could leave Britain trapped in the European Union's trade rules with no unilateral way out -- but would back a deal if the backstop was time-limited or replaced with alternative arrangements.

"We now all need to hold our nerve to get the changes this house has required and deliver Brexit on time," May is due to tell MPs.

"By getting the changes we need to the backstop; by protecting and enhancing workers' rights and environmental protections; and by enhancing the role of parliament in the next phase of negotiations I believe we can reach a deal that this house can support."

Commons Leader Andrea said on BBC radio that May was not simply "running down the clock" until March 29.

"What the prime minister wants is a bit more time," she said.

She said May would promise MPs they could hold a series of votes on February 27 in an attempt to influence her Brexit strategy if she has not agreed a new deal by then.

Leadsom, responsible for bringing government business through parliament, said the talks were "pretty crucial but delicate negotiations with the EU to try to make sure that we can sort out the problem with an unlimited backstop".

"It would be an extraordinary outcome if the thing that the backstop is seeking to avoid, which is a hard border in Northern Ireland, if the EU were so determined to be completely intransigent about it that they actually incur the very thing that they're seeking to avoid by pushing the UK into a position where we leave without a deal."

Brexit Secretary Stephen Barclay and David Lidington, May's de facto deputy, are in Strasbourg meeting members of the European Parliament, while British Foreign Secretary Jeremy Hunt is in Paris as part of a diplomatic offensive.

The EU's chief Brexit negotiator Michel Barnier has called for "clarity and movement" from Britain.

In an effort to break the impasse, Barclay hosted Barnier for a working dinner at the British ambassador's residence in Brussels late Monday, with concern growing on both sides of the Channel.

Speaking afterwards, Barnier said the talks had been "constructive".

"We are clear from our side that we are not going to reopen the withdrawal agreement, but we will continue our discussion in the coming days," he told journalists.