We all have to take care, Mexico President tells cub reporters on 40,000 disappearances 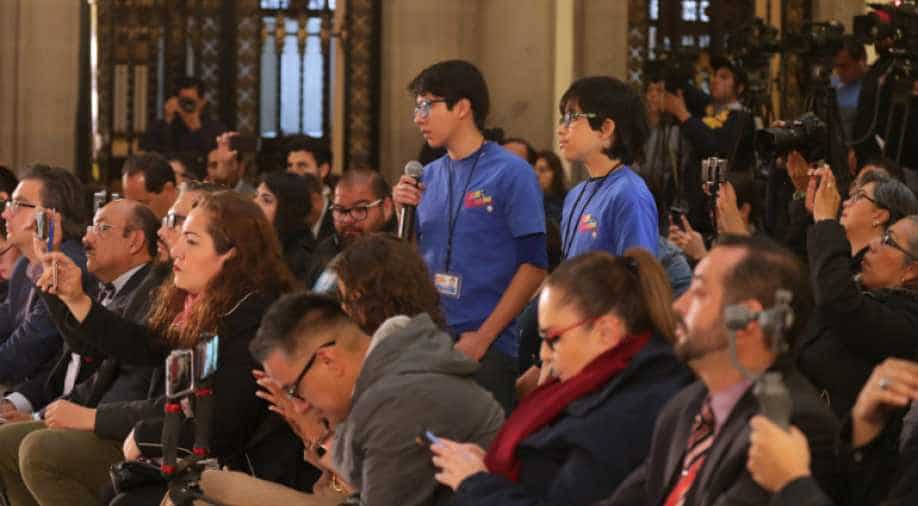 The reporters thanked the president for answering the questions and asked him about the government's strategy to prevent "many young people with brilliant minds" from leaving Mexico to look for opportunities abroad.

Two cub reporters who work for a children-oriented radio station got the chance on Thursday to ask questions of Mexican President Andres Manuel Lopez Obrador.

"Let's see, the children, are they reporters?" the president asked upon giving the floor to the two children, who were sitting in the second row at his daily morning press conference wearing blue t-shirts with the Radioaventureros (Radio-adventurers) logo.

Fernando, 12, confirmed to the president that he is a reporter and that he has spent two years investigating the increasing disappearances of children around the country, so he questioned the president on the government's strategy to stop the problem.

Lopez Obrador called the number of disappearances in the country - 40,000 in the last 10 years - a horror that "should never happen again" and said that he will not allow "the state to disappear any human being" or for any "criminal gang" to exist.

"We all have to take care (of each other), as you do, and I congratulate you for making sure that there are no (more) disappearances," the president told the two young reporters.

Earlier this week, high-level officials in Lopez Obrador's administration unveiled a plan to try to find the 40,000 people listed as missing.

The goal is to work with relatives of the missing and non-governmental organizations to design the general guidelines and public policies for conducting searches, locating and identifying missing persons, as well as preventing, investigating and punishing those responsible for disappearances, Government Undersecretary for Human Rights Alejandro Encinas said Monday.

Fernando's colleague, Eitan, thanked the president for answering the questions and asked him about the government's strategy to prevent "many young people with brilliant minds" from leaving Mexico to look for opportunities abroad.

"The scholarship program will be improved for those who study for Masters degrees, doctorates. For those who are dedicated to scientific research, to innovation. They will have broad possibilities so that they can contribute their knowledge to the development of the country," Lopez Obrador said.

On that subject, he recalled that he appointed a scientist, Maria Elena Alvarez-Buylla, as head of the National Council of Science and Technology (Conacyt), a post that was previously occupied by "professionals who did not necessarily have specializations."

Conacyt, whose mission is promoting scientific and technological development, works closely with Mexican academic institutions to encourage and facilitate the work of budding scientists.

On its website, Radioaventureros is defined as "children's radio made by children for children." At the station, interviews have been conducted with personalities such as acclaimed Mexican writer and journalist Elena Poniatowska.