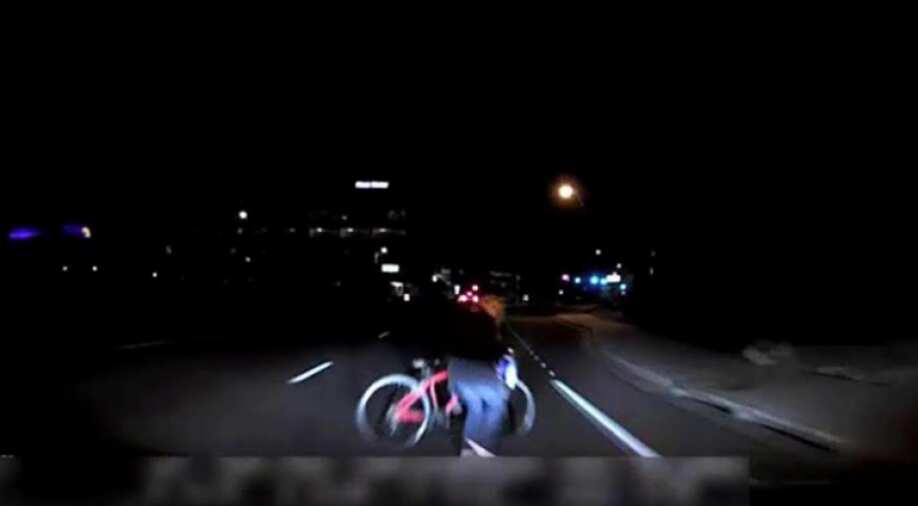 A still frame taken from video released March 21, 2018 shows the exterior view of the self-driving Uber vehicle leading up to the fatal collision in Tempe, Arizona, US. Photograph:( Reuters )

Police in Arizona on Wednesday released a short video of a fatal collision between an Uber self-driving vehicle and a pedestrian, as an investigation continues into the accident that has put new focus on the safety of autonomous vehicles.

The video, taken from inside the Volvo sports utility vehicle that Uber has used for testing, shows the vehicle driving along a dark road when an image of a woman walking a bicycle across the road appears in the headlights.

Tempe Police Vehicular Crimes Unit is actively investigating
the details of this incident that occurred on March 18th. We will provide updated information regarding the investigation once it is available. pic.twitter.com/2dVP72TziQ

The woman, Elaine Herzberg, 49, later died from her injuries.

Police have released few details about the accident that occurred Sunday night in Tempe, Arizona, a suburb of Phoenix, while the car was driving in autonomous mode. Uber suspended its self-driving testing in North America after the incident.

The video shows the vehicle travelling in the right hand lane of a divided four-lane roadway. It is dark but the vehicle's headlights are on. Suddenly, the headlights illuminate a woman directly in front of the car who is crossing the car's lane with her bike.

A photo released by safety regulators on Tuesday of the vehicle showed that the impact occurred on the right side of the vehicle.

The video also shows the driver at the wheel, who appears to be looking down. Just before the video stops, the driver looks up and suddenly looks shocked.

“The video is disturbing and heartbreaking to watch, and our thoughts continue to be with Elaine’s loved ones,” Uber said in a statement. “Our cars remain grounded, and we’re assisting local, state and federal authorities in any way we can.”

The video is likely to be a key part of investigations of Uber’s self-driving car technology and whether it was ready for testing on public roads.

Although the exact specifics of Uber’s technology are not known, self-driving cars generally use a combination of sensors, including radar and light-based Lidar, to identify objects around the vehicle, including potential obstacles coming into range.

One question on regulators’ minds would be why the sensors did not pick up on the presence of Herzberg, who would ostensibly have already crossed three lanes of traffic before arriving in the path of the Uber vehicle.