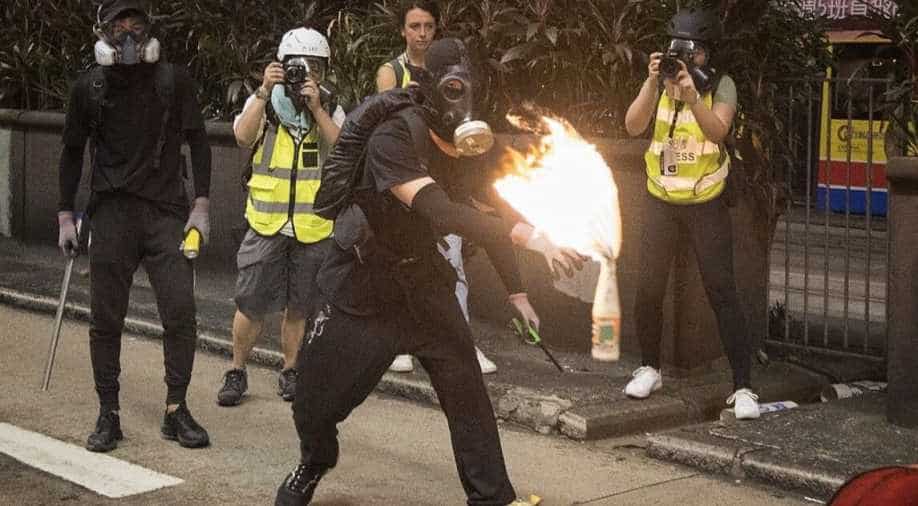 A protester throws a petrol bomb in the Wanchai area of Hong Kong on October 1, 2019, as the city observes the National Day holiday to mark the 70th anniversary of communist China's founding. Photograph:(AFP)
Follow Us

The incident comes even as China celebrates 70th year of its founding with a grand military parade and cultural programme.

After reports said police in Hong Kong used live round at demonstrators, Britain said it could risk inflaming the situation.

"Whilst there is no excuse for violence, the use of live ammunition is disproportionate, and only risks inflaming the situation," Foreign Secretary Dominic Raab said in a statement.

On Tuesday, a Hong Kong police officer shot a protester in the chest with a live round.

"An officer discharged his firearm after coming under attack and a protester was struck in the chest in Tsuen Wan district today," the source told AFP, requesting anonymity.

The incident comes as China is celebrating 70th year of its founding with a grand military parade and cultural programme.

Ahead of the celebration, President Xi Jinping had said Hong Kong has the "homeland's full support" and it "must develop and progress together with the mainland".

"We should strictly do things in accordance with the constitution and the basic law," Xi said while addressing a banquet attended by foreign visitors, Chinese ethnic minorities, soldiers, athletes and government officials.

"I believe that with the homeland's full support, and the joint effort of all compatriots who love the country, Hong Kong and Macau, Hong Kong and Macau must develop and progress together with the mainland and become better places in the future," the Chinese president added.