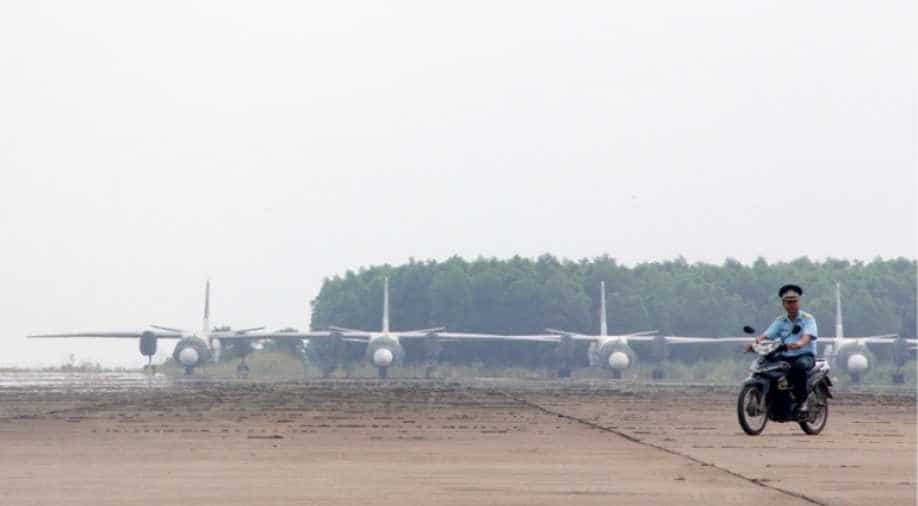 A Vietnamese soldier rides on a motorbike on the runway at Bien Hoa air base. Photograph:( AFP )

Hanoi says up to three million Vietnamese people were exposed to Agent Orange, and that one million suffer grave health repercussions today -- including at least 150,000 children with birth defects.

The US launched on Saturday a $183 million clean-up at a former Vietnam storage site for Agent Orange, a toxic defoliant used in their bitter war which years later is still blamed for severe birth defects, cancers and disabilities.

Located outside Ho Chi Minh City, Bien Hoa airbase -- the latest site scheduled for rehabilitation after Danang airbase's clean-up last year -- was one of the main storage grounds for Agent Orange and only hastily cleared by soldiers near the war's end more than four decades ago.

US forces sprayed 80 million litres of Agent Orange over South Vietnam between 1962 and 1971 in a desperate bid to flush out Viet Cong communist guerrillas by depriving them of tree cover and food.

The spillover from the clearing operation is believed to have seeped beyond the base and into groundwater and rivers and is linked to severe mental and physical disabilities across generations of Vietnamese -- from enlarged heads to deformed limbs.

At Bien Hoa, more than 500,000 cubic metres of dioxin had contaminated the soil and sediment, making it the "largest remaining hotspot" in Vietnam, said a statement from the US development agency USAID, which kicked off a 10-year remediation effort on Saturday.

The dioxin amounts in Bien Hoa are four times more than the volume cleaned up at Danang airport, a six-year $110 million effort which was completed in November.

"The fact that two former foes are now partnering on such a complex task is nothing short of historic," said the US ambassador to Vietnam, Daniel Kritenbrink, at Saturday morning's launch attended by Vietnamese military officials and US senators.

Hanoi says up to three million Vietnamese people were exposed to Agent Orange, and that one million suffer grave health repercussions today -- including at least 150,000 children with birth defects.

An attempt by Vietnamese victims to obtain compensation from the United States has met with little success. The US Supreme Court in 2009 declined to take up the case while neither the US government nor the manufacturers of the chemical have ever admitted liability.

While US officials have never admitted direct links between Agent Orange and birth defects, USAID on Saturday also issued a "memorandum of intent" to work with government agencies to improve the lives of people with disabilities in seven Vietnamese provinces.