US Supreme Court takes up major challenge to abortion rights 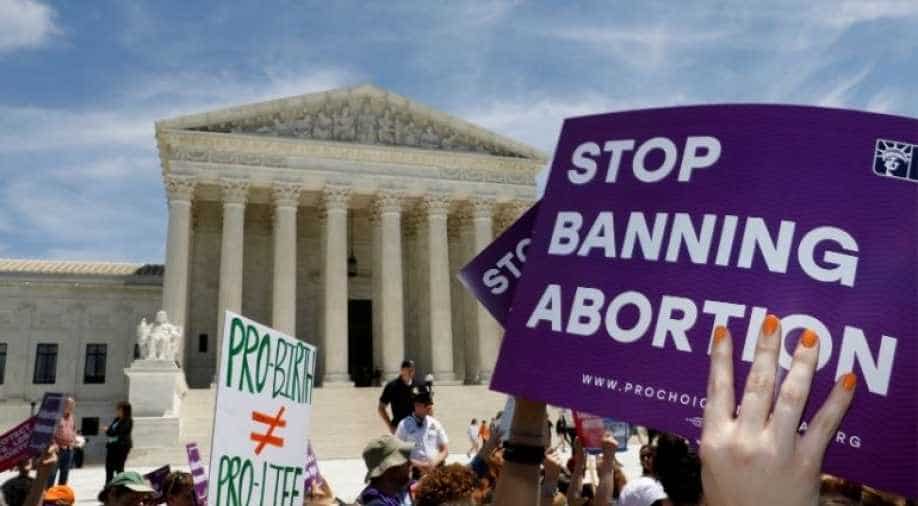 Opponents have countered that the sexual orientation and gender identity bill would cause a chilling effect in classrooms beyond elementary school and harm and exclude LGBTQ youth, who are already at higher risk of bullying and suicide than their peers, and that the bill about how to teach history attempts to unfairly penalize teachers and dismiss the country’s racist past. Photograph:(Reuters)
Follow Us

By hearing the case in their next term, which starts in October and ends in June 2022, the justices will look at whether to overturn a central part of the landmark ruling, a longstanding goal of religious conservatives

The US Supreme Court on Monday agreed to consider gutting the 1973 Roe v. Wade ruling that legalised abortion nationwide, taking up Mississippi's bid to revive a Republican-backed state law that bans the procedure after 15 weeks of pregnancy.

By hearing the case in their next term, which starts in October and ends in June 2022, the justices will look at whether to overturn a central part of the landmark ruling, a longstanding goal of religious conservatives.

The ruling, expected next year, could allow states to ban the procedure before the fetus is viable outside the womb, upending decades of legal precedent.

In the Roe v. Wade decision, subsequently reaffirmed in 1992, the court said that states could not ban abortion before the viability of the fetus outside the womb, which is generally viewed by doctors as between 24 and 28 weeks. The Mississippi law would ban abortion much earlier than that. Other states have backed laws that would ban the procedure even earlier.

"Alarm bells are ringing loudly about the threat to reproductive rights. The Supreme Court just agreed to review an abortion ban that unquestionably violates nearly 50 years of Supreme Court precedent and is a test case to overturn Roe v. Wade," said Nancy Northup, president of the Center for Reproductive Rights, which is among those challenging the law.

The office of Mississippi`s attorney general did not immediately respond to a request for comment.

The Supreme Court in a 5-4 June 2020 ruling struck down an abortion law in Louisiana that imposed restrictions on doctors who perform the procedure. The late liberal Justice Ruth Bader was still on the court at the time, and conservative Chief Justice John Roberts voted with the court`s liberal wing in the ruling. Roberts at the time, however, made it clear that he voted the way he did because he felt bound by the court`s 2016 ruling that struck down a similar law in Texas.

The 2018 Mississippi law, like others similar to it passed by Republican-led states, was enacted with full knowledge that was a direct challenge to Roe v. Wade.

After the only abortion clinic in Mississippi, Jackson Women`s Health Organization, sued to try to block the measure, a federal judge in 2018 ruled against the state. The New Orleans-based 5th US Circuit Court of Appeals in 2019 reached the same conclusion, prompting the state to appeal to the Supreme Court.

"States may regulate abortion procedures prior to viability so long as they do not impose an undue burden on the woman`s right, but they may not ban abortions. The law at issue is a ban," 5th Circuit Judge Patrick Higginbotham wrote.

Abortion remains a divisive issue in the United States, as in many countries. Christian conservatives are among those most opposed to it. Abortion rates in the United States have steadily declined since the early 1980s, reaching the lowest levels on record in recent years, according to the nonprofit Guttmacher Institute.

The June 2020 ruling in the Louisiana case marked the court`s first major abortion decision since Trump appointed Brett Kavanaugh in 2018 and Neil Gorsuch in 2017 as justices. Both voted in favor of Louisiana`s restrictions. If Barrett were to vote on similar lines, conservatives could have a majority to curb abortion rights regardless of how Roberts votes. Trump had promised during the 2016 presidential race to appoint justices who would overturn Roe v. Wade.

The Mississippi appeal had been pending at the court since June 2020 without the justices taking action on whether or not to hear it. During that time, Ginsburg died and was replaced by Barrett and Trump lost his re-election bid, to be replaced by Democratic President Joe Biden, who supports abortion rights.