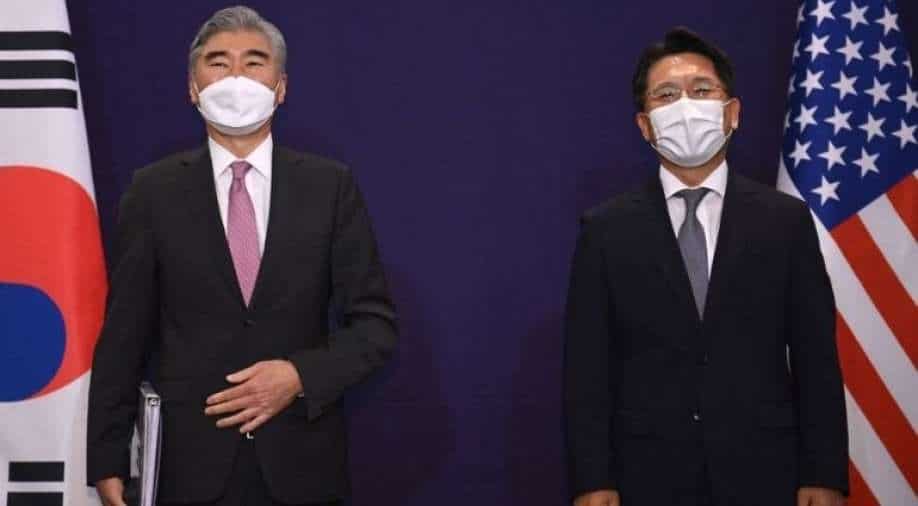 During talks between US special representative for North Korea, Sung Kim, and his South Korean counterpart Noh Kyu-duk on Monday, the two agreed to 'look into terminating the working group' while reinforcing coordination at other levels, the ministry said in a statement

The United States and South Korea have agreed to consider scrapping a working group established to coordinate North Korea policy, Seoul's foreign ministry said on Tuesday, after it became seen as a way for Washington to block inter-Korean projects.

During talks between US special representative for North Korea Sung Kim and his South Korean counterpart Noh Kyu-duk on Monday, the two agreed to 'look into terminating the working group' while reinforcing coordination at other levels, the ministry said in a statement.

On Monday, Kim said he was willing to meet with the North Koreans 'anywhere, anytime without preconditions' and that he looks forward to a 'positive response soon'. He was scheduled to meet with South Korean Unification Minister Lee In-young, who handles relations with the North, on Tuesday.

The working group was set up in 2018 to help the two allies coordinate their approaches to issues, such as denuclearisation talks, humanitarian aid, sanctions enforcement and inter-Korean relations amid a flurry of diplomatic engagement with North Korea at the time.

When asked last year about Seoul's proposals, such as reopening individual tourism to its northern neighbour, US ambassador to South Korea at the time, Harry Harris, said that 'in order to avoid a misunderstanding later that could trigger sanctions... it’s better to run this through the working group'.

Though Harris added that it was not the United States’ place to approve South Korean decisions, the remarks caused controversy in Seoul and a former aide to South Korean President Moon Jae-in later told parliament the working group was increasingly seen as an obstacle to inter-Korean relations.

The Moon administration would see ending the working group as a goodwill gesture from new US President Joe Biden, said Ramon Pacheco Pardo, a Korea expert at King's College London.

"From a South Korean perspective, this was basically a mechanism for the US to block inter-Korean projects during the Trump years," he said. "It would be a clever political move for the Biden administration to end the group, since consultation between Washington and Seoul will take place anyway."