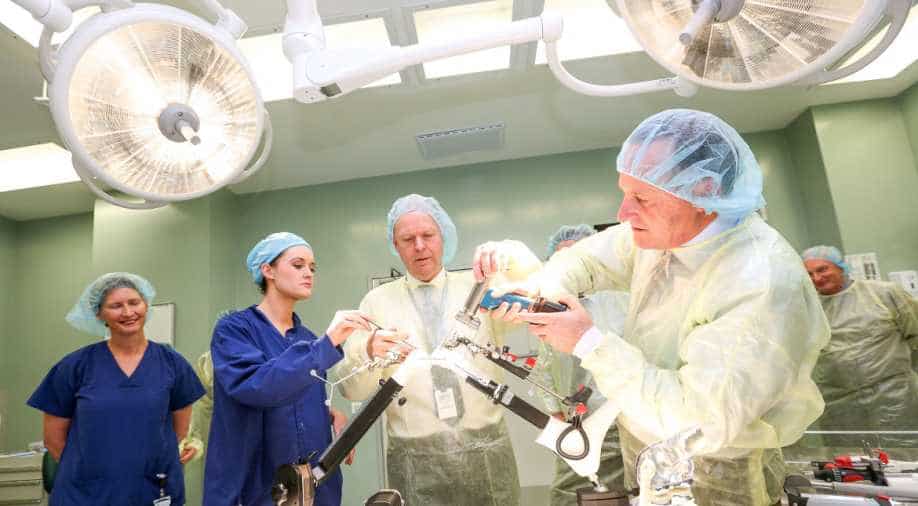 Representative image: Prime Minister John Key is taken through a medical procedure by Mr Chris Hoffman during a visit to Kenepuru Hospital on May 6, 2015 in Wellington, New Zealand. Photograph:( Getty )

The Republican-led U.S. Congress, under pressure from President-elect Donald Trump to move quickly, took its first concrete step towards dismantling Obamacare on Thursday as the Senate voted to instruct key committees to draft legislation to repeal it.

Trump on Twitter congratulated the Senate for its 51-48 vote in the early hours of Thursday, adding "now it's onto the House!" Only one Republican, Kentucky's Rand Paul, joined Senate Democrats in opposing the resolution.

The House of Representatives plans to vote on the measure on Friday, Speaker Paul Ryan said, pushing ahead despite concerns among some Republicans about launching a repeal before building a consensus about how to replace the complicated and far-reaching Affordable Care Act, dubbed Obamacare.

The resolution passed on Thursday instructs committees of the House and Senate to draft repeal legislation by January 27. Both chambers will then need to approve the resulting legislation before any repeal goes into effect.

Obamacare's fate is a high-stakes political showdown between Republicans and Democrats that potentially jeopardizes medical coverage for millions of Americans and risks causing chaos in the health insurance marketplace.

House Democratic Leader Nancy Pelosi vowed to fight. "I think it's easier to win a fight when something is going to be taken away from you," Pelosi said in an appearance with elderly Americans who talked about how they had been helped by the law's provisions, including lower prescription drug costs.

Republicans have called Obamacare a federal government overreach and have sought to undermine it in Congress and the courts since it was passed by Democratic majorities in the House and Senate in 2010.

They are aggressively pushing towards their goal of killing Obamacare now that they will control Congress and the White House once Trump takes office on January 20.

Ryan, speaking to reporters just hours after the Senate vote, said House Republicans would discuss options for replacing Obamacare during an annual retreat at the end of this month in Philadelphia.

Ryan said while Congress will take some replacement steps, the incoming Trump administration will be able to act on its own on some aspects, which he did not detail. Ryan said lawmakers were working on dismantling Obamacare "in sync" with Trump.

"We're not holding hard deadlines, only because we want to get it right," Ryan said, indicating it will take some time for several House committees to work on replacement legislation.

"They want to kill ACA but they have no idea how they are going to bring forth a substitute proposal," said Senator Bernie Sanders of Vermont, an independent who caucuses with the Democrats.

Indeed, some Republicans have expressed concern about the party's current strategy of pushing repeal without having a consensus replacement plan ready.

Representative Charlie Dent, a moderate Republican from Pennsylvania, has "major concerns" about the process, according to a spokesman, fearing a repeal vote at the start diminishes the leverage that may be needed to get some lawmakers to back a replacement later.

Trump put new pressure on congressional Republicans on Wednesday when he said Obamacare repeal and replacement should happen "essentially simultaneously". And an influential conservative group, Heritage Action, late on Wednesday pressed lawmakers to back the resolution.

Some Americans are worried about what this change will mean to their immediate future.

May each one of these men experience the anxiety that I as a cancer patient feel right now, knowing I'll die if care becomes unavailable https://t.co/ZaOpZI6VKA

Democrats say Obamacare is working, enabling growing numbers of Americans to get medical insurance and helping slow the rise in healthcare spending. Republicans say the program is collapsing and support giving states more control. The average premium for a private insurance policy obtained through Obamacare is set to rise 25 per cent in 2017.