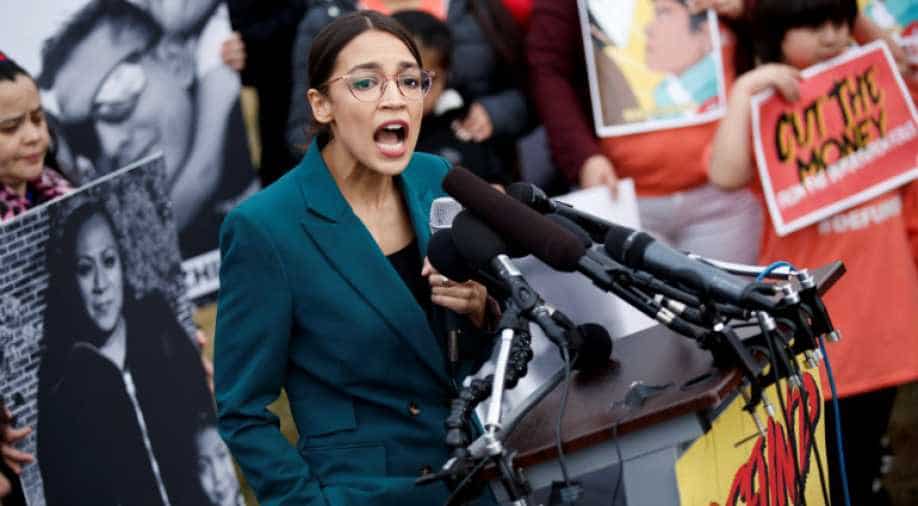 Democatic Congresswoman Alexandria Ocasio-Cortez delivers a speech at the US Capitol in Washington on February 7, 2019. Photograph:( Agencia EFE )

Representative Alexandria Ocasio-Cortez said that families who come to the US border do so seeking a "safer" future for themselves.

Immigrants' rights protection groups and several Democratic lawmakers on Thursday urged Congress not to approve additional funding for US Immigration and Customs Enforcement (ICE), the government agency tasked with deporting people who enter the country unlawfully.

"An agency like ICE, which repeatedly and systematically violates human rights, does not deserve a dime," Representative Alexandria Ocasio-Cortez, of New York, said near the US Capitol.

She said President Donald Trump is demanding billions of dollars to "continue to militarize and weaponize a force that has zero accountability," and she promised not to approve a "single dollar" for ICE.

The newly-elected Democrat from New York's 14th District said that Trump, who claims to support legal immigration to the US, does not want any kind of immigration and has been cutting and/or eliminating legal immigration programs such as the visa lottery, family reunification, Temporary Protected Status and Deferred Action for Childhood Arrivals.

The congresswoman from The Bronx and Queens was accompanied by several other newly-elected lawmakers, including Ilhan Omar, Rashida Tlaib and Ayanna Pressley.

The four lawmakers wrote a letter to their colleagues serving on the conference committee that is negotiating Trump's request for border wall funding urging them to curtail funding for the Department of Homeland Security, including its components, ICE and Customs and Border Protection.

Omar, who represents Minnesota's District 5 and is the first Somali-origin lawmaker in Congress, argued that the new Democrat-controlled House sees beyond politics and respects people.

She said that families who come to the US border do so seeking a "safer" future for themselves.

The groups United We Dream, CASA Maryland, Indivisible, Move On and the Center for Popular Democracy organized the event under the slogan "Defund the deportation force."

The leaders of these associations on Thursday turned over to the congressional representatives more than 200,000 signatures on a petition calling for funding cutbacks.

Criticism of ICE has increased over the past year after the Trump administration last April launched its controversial "zero tolerance" strategy against immigration across the border with Mexico, and in accord with that plan US authorities separated more than 3,000 children, including babies, from their parents who had brought them across the border illegally.