US election 2020: The controversy behind early voting 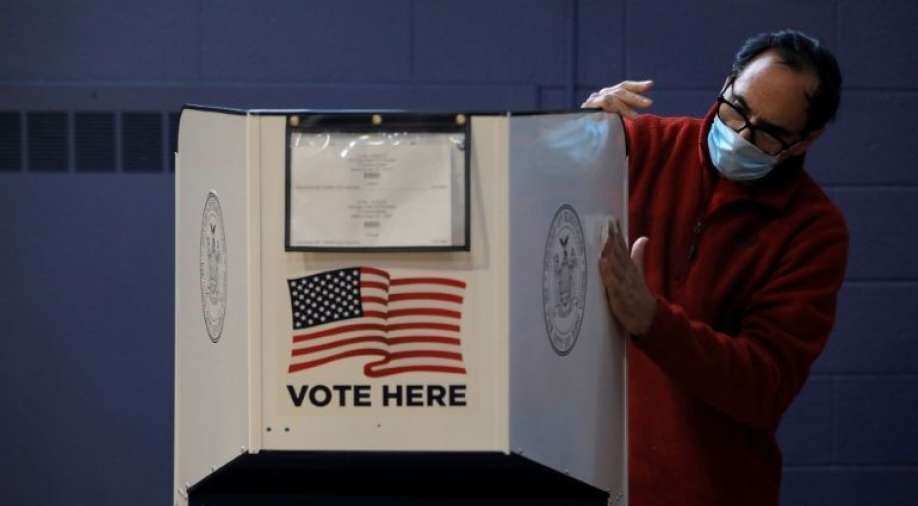 A man sanitizes a privacy booth to fight the spread of coronavirus disease (COVID-19) at a polling station opened for early voting at Our Lady Help of Christians in Staten Island, New York City, US Photograph:( Reuters )

The process of early voting was introduced for Americans living outside the country and for the members of the military, merchant marine, and their families

More than 60 million Americans have cast ballots in the US presidential election with seven days to go, a record-breaking pace that could lead to the highest voter turnout in over a century, according to data from the US Elections Project on Monday.

The tally is the latest sign of intense interest in the contest between Republican President Donald Trump and Democratic challenger Joe Biden, as well as voters’ desire to reduce their risk of exposure to COVID-19, which has killed about 225,000 people across the United States.

Early voting also known as advance polling or pre-poll voting, is a convenient voting process for citizens to cast their vote prior to the scheduled election day. For the United States America, early voting is similar to absentee voting and the pre-polling period varies from state-to-state.

The process of early voting was introduced for Americans living outside the country and for the members of the military, merchant marine, and their families. American citizens have a varied option to vote early. Ballots, mail, fax, email and even on web portals. But since the beginning of the 2020 election cycle and the arrival of the coronavirus pandemic, mail-in voting has suddenly become a subject of controversy.

WHAT IS MAIL-IN VOTING?

Americans have been voting by mail in the U.S. For close to a hundred years now, but it has never been an issue as it in the 2020 election. And there are two reasons for this.

The numbers of voters who vote early has increased in recent years and with the pandemic casting a shadow over the presidential polls, the democrats have pushed for citizens to vote by mail. With the election day inching closer, the early voter turnout is breaking records almost every day. In the 2016 presidential election, approximately 33 million votes were cast via mailed out ballots. Which makes for about a quarter of all ballots cast across the country.

And 2020 is witnessing a staggering increase in the early voter turnout, even in states which didn’t usually use mail-in voting.

The second reason for the mail-in ballot voting becoming an issue is the president of the United States Donald Trump. Trump and his team have repeatedly been claiming that the widespread mail-in voting will inevitably lead to "Fraud”. They're very little evidence for that. But despite trump's unsubstantiated claims, the number people running out to voter early is historic this year.  With a highly polarised election inching towards its end, all hopes lie on the vote count & result announcement.