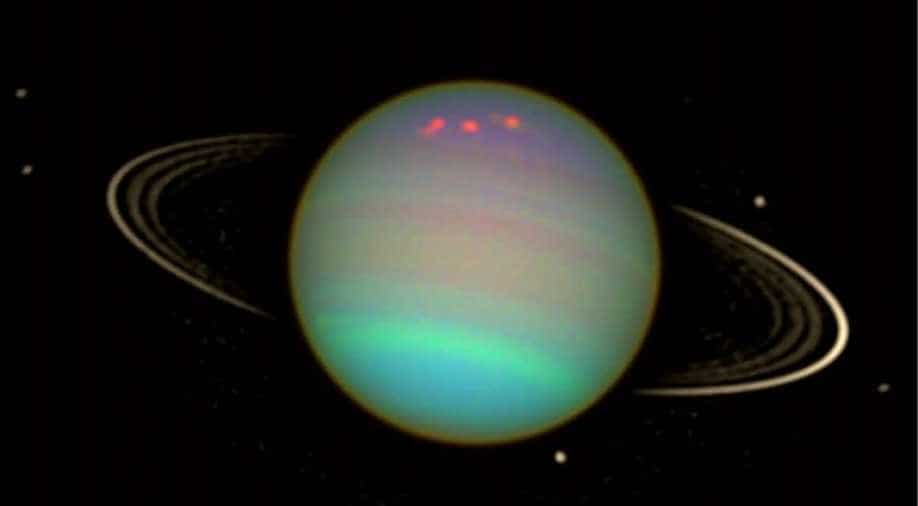 The planet’s axis is titled by almost 98 degrees

Uranus wasn’t always tilted! A study claims that the planet was struck by an earth-size rock which then titled it and may also be responsible for birthing the planet’s moons.

The planet’s axis is titled by almost 98 degrees, which might not mean much, but stands out when compared to other planets.

For instance, our very own Earth is titled by over 23 degrees while Jupiter is tilted by 3 degrees.

In essence, Uranus is the only planet that spins on its side.

A Japanese study has now claimed that the collision with another giant rock may not just have titled the planet, but also birthed its 27 known moons.

Out of these, eighteen moons circle around the planet’s equator, as is customary.

However, Yuya Ishizawa at Kyoto University in Japan claims that these are the regular moons. For clarity - the irregular moons are those that were captured by the planet, hence they do not orbit around the planet’s equator, but circle the planet in a haphazard manner!

The Uranus, shortly after being born, was struck by a rock roughly the size of Earth, which tilted it.

The debris from the impact would then get stuck around the planet, which would then assume the characteristics of the planet’s natural moons and then stick around, or the researchers claim “captured”.

"Material from the two bodies is ejected in a debris disk, and finally satellites are formed from the debris disk," Ishizawa said in a conversation with Space.com. "It is possible to explain the axial tilt and the formation of the regular satellites of Uranus simultaneously", the researcher added.