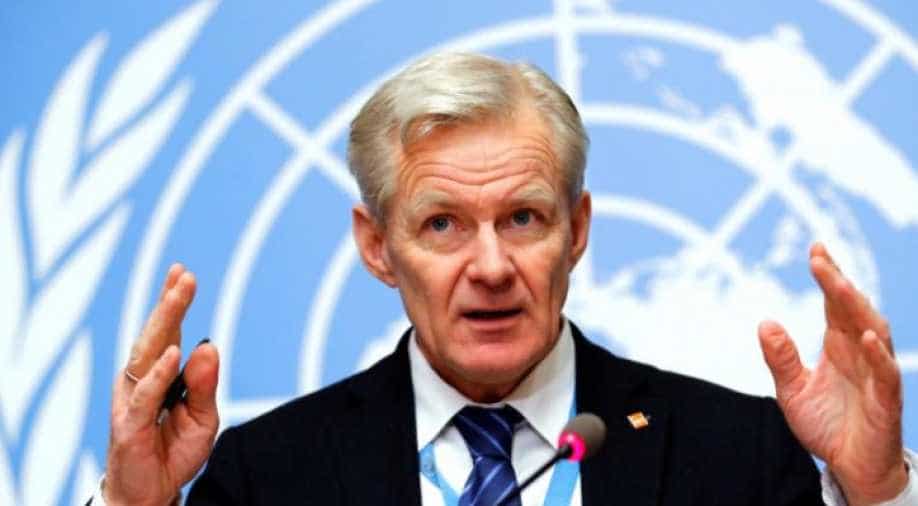 United Nations Syria envoy's Special Adviser Jan Egeland attends a briefing after the meeting of the humanitarian task force on Syria in Geneva. Photograph:(Reuters)
Follow Us

A United Nations humanitarian task force has been unable to make deliveries to desperate Syrians for the past two months as President Bashar al-Assad’s government has withheld approval for aid convoys, the UN humanitarian adviser said on Thursday.

Before they can move into besieged areas or across front lines, the convoys require letters from the government and security guarantees from armed groups.

Insurgents fighting Assad’s forces were also creating obstacles, contributing to the worst situation since 2015, he said.

Egeland called on Russia, Turkey and Iran to de-escalate the fighting in Idlib governorate, which he said was “screaming for a ceasefire”.

“When we need their ability to influence the parties the most, in this bleak hour for humanitarian work, humanitarian diplomacy seems to be totally impotent. We’re getting nowhere at the moment.”

This week Russia convened a Syrian peace congress in Sochi. Egeland said it had so far not resulted in any progress but he hoped that it would.

Air strikes hit two crowded markets in Idlib this week, killing at least 31 people, and have deprived hundreds of thousands of healthcare.

“I told the members of the humanitarian task force, we cannot have conventional warfare in what is essentially a refugee camp,” Egeland said.

Further north, a Turkish offensive in Afrin district has displaced about 15,000 people, Egeland said, adding: “There are also reports...that local authorities have made it hard for people to flee from the Afrin area.”

And outside Damascus, the rebel-held enclave of Eastern Ghouta, where almost 400,000 people are under siege and about 750 need urgent medical evacuation, desperately needs a pause in the fighting, he said.

“We have indications from both sides that they want it, but it hasn’t happened. And it’s both sides that have to help us here. There are air raids, fighting from the government side, but there is a barrage of mortars and grenades going from this area going into civilian neighbourhoods in Damascus.”

He also said 112 people had been killed by explosions in the town of Raqqa since it was recaptured from Islamic State fighters in October because people had been allowed back to their homes before the town had been cleared of bombs.