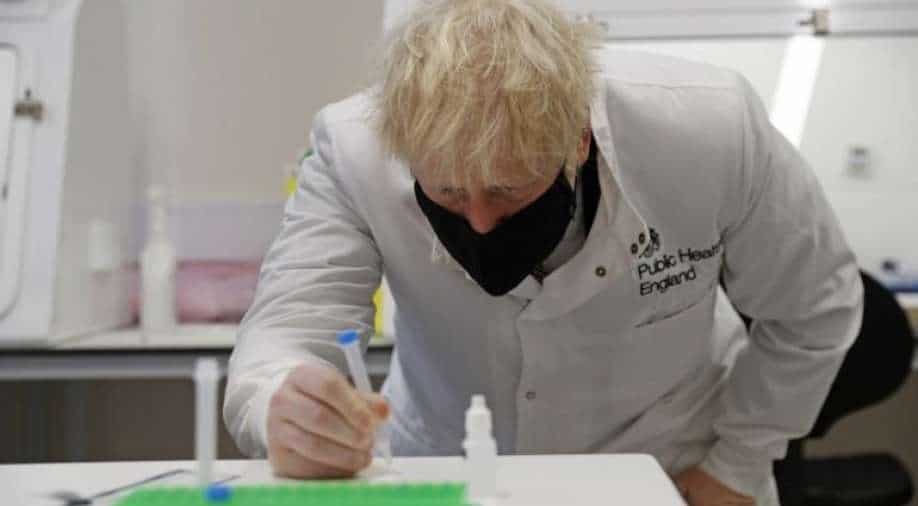 Britain's Prime Minister Boris Johnson looks at a sample at the Lateral Flow Testing Laboratory during a visit to the Public Health England site at Porton Down science park near Salisbury, southern England, on November 27, 2020. Photograph:( AFP )

British Prime Minister Boris Johnson urged lawmakers to support his new system of regional coronavirus restrictions on Tuesday, arguing in the face of criticism from his party that the system was needed to keep the virus under control

British Prime Minister Boris Johnson urged lawmakers to support his new system of regional coronavirus restrictions on Tuesday, arguing in the face of criticism from his party that the system was needed to keep the virus under control.

More than 40% of people in England will be subject to the toughest tier of restrictions on their daily life from Wednesday, when the government shifts to a region-by-region approach after a month of national lockdown, with just 1% in the lowest band.

"With the spread of the epidemic varying across the country, there remains a compelling ... case for regional tiers in England," Johnson told parliament, batting away criticism from several unhappy lawmakers.

"All we need to do now is to hold our nerve until these vaccines are indeed in our grasp and indeed being injected into our arms... let`s work together to control the virus."

The tiered system has ignited a rebellion in Johnson`s Conservative Party, with as many as 80 of the 364 elected Conservatives already criticising the plan as draconian, badly implemented or based on insufficient evidence.

The measures will be approved by a vote in parliament later on Tuesday despite the anticipated rebellion because the main opposition Labour Party has chosen to abstain rather than vote against the government.

The new system dictates what citizens can and can`t do and, while it is less strict than the two nationwide lockdowns England has endured this year, it is still a restriction of social and commercial freedoms previously unheard of outside wartime.

Shops and schools will stay open in all tiers, but in the top tier pubs and restaurants will be closed except for takeaway services.

Travelling to or from top tier regions is not allowed and mixing indoors with other households is banned in the top two tiers. The government estimates 23 million people will be in the toughest tier and 32 million in the middle tier - together accounting for just under 99% of England`s population.

Scotland, Wales and Northern Ireland all implement their own restrictions set by their devolved governments.

Johnson responded to members of his party who raised complaints about the allocation of their regions into tiers by acknowledging the difficulty they would cause and promising decisions would be reviewed every two weeks.

"The government will look at how we can reflect as closely as possible the reality of what is happening on the ground," he said.

He also announced a one-off payment of 1,000 pounds ($1,335) to pubs that would be unable to reopen under the new rules, seeking to address one of the most acutely affected industries.

The rebellion - due at a vote around 1900 GMT - will underscore how Johnson`s handling of the pandemic has weakened his grip on the ruling Conservatives since they secured a landslide election win a year ago.

Last month Johnson sought to reset his relationship with rank and file Conservative lawmakers, replacing his most senior adviser Dominic Cummings - whom many Conservatives distrusted - with a more conventional appointment.