UK offers 'full support' to US ambassador, Trump lashes out at Theresa May after leak of damning cables 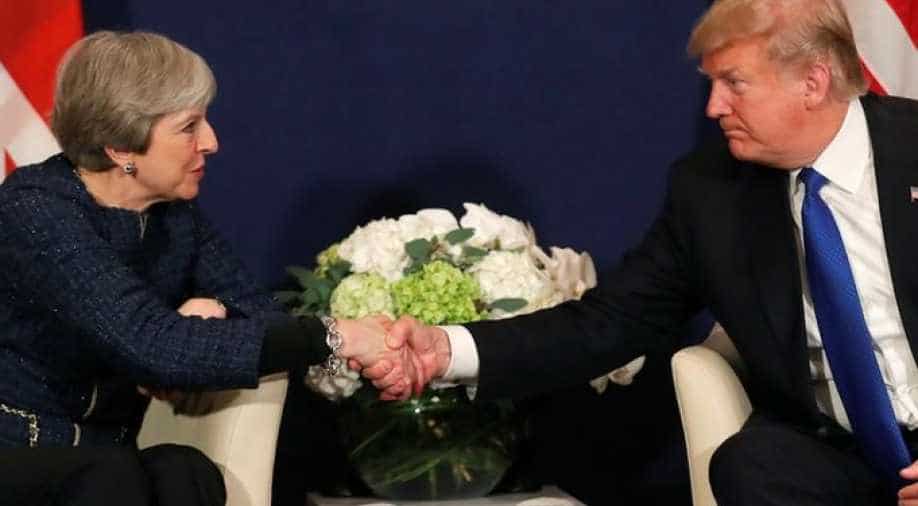 'What a mess she and her representatives have created,' Trump fumed in a series of tweets for Theresa May. 'I told her how it should be done, but she decided to go another way.'

British Prime Minister Theresa May's government on Monday reiterated its "full support" for its ambassador to Washington after US President Donald Trump said he would no longer deal with him.

Trump launched an extraordinary attack on outgoing British premier Theresa May, following the leak of diplomatic cables highly critical of his presidency.

London has been scrambling to stem the damage caused by the weekend release of confidential telegrams in which its envoy to Washington, Kim Darroch, described the US leader as "inept" and his White House as "uniquely dysfunctional."

Visibly angered by May's continuing support for her ambassador -- which Downing Street reiterated on Monday -- Trump assailed the prime minister over her handling of fraught Brexit negotiations, and welcomed her impending departure from office.

"What a mess she and her representatives have created," Trump fumed in a series of tweets. "I told her how it should be done, but she decided to go another way."

"The good news for the wonderful United Kingdom is that they will soon have a new Prime Minister," he wrote.

....thought of within the U.S. We will no longer deal with him. The good news for the wonderful United Kingdom is that they will soon have a new Prime Minister. While I thoroughly enjoyed the magnificent State Visit last month, it was the Queen who I was most impressed with!

As for London's man in Washington, Trump declared he would have no further contact with him.

"I do not know the Ambassador, but he is not liked or well thought of within the US," the president said, doubling down on weekend comments claiming his administration were "not big fans" of Darroch.

"We will no longer deal with him," Trump vowed.

But even after Trump's remarks, a government spokesman said that "Sir Kim Darroch continues to have the prime minister's full support."

The cables' publication in the Mail on Sunday newspaper came just a month after Trump enjoyed a state visit to Britain that included a 41-gun salute welcome at Buckingham Palace and a banquet dinner with the queen.

The incident threatens to complicate London's efforts to strike a new trade agreement with key ally the United States, in hope of mitigating potential damage from Britain's withdrawal from the European Union.

May's office called the leak "unacceptable," but said, "the prime minister has full faith in her ambassador to Washington."

British officials defended Darroch as carrying out his duties by providing "frank" accounts of developments in Washington.

"We have made clear to the US how unfortunate this leak is. The selective extracts leaked do not reflect the closeness of, and the esteem in which we hold, the relationship," the government spokesperson said.

"At the same time we have also underlined the importance of ambassadors being able to provide honest, unvarnished assessments of the politics in their country."

His US affairs deputy Alan Duncan told parliament police could launch their own investigation "if evidence of criminality is found."

The Daily Telegraph newspaper said such memos are seen by up to 100 people working in the Foreign Office and other government departments.

"But it would require a single official or minister to have access to the whole cache, inevitably casting the spotlight on senior ministers," it wrote.

The immediate suspicion of the London papers fell on Brexit-backing players in a power struggle within the governing Conservative Party.

British politics are in for a major revamp once May ends her three-year spell in power later this month.

Brexit-supporting former foreign minister Boris Johnson is the favourite to replace her in a leadership contest against Hunt.

The winner will get to appoint his own US envoy by the time Darroch's term expires in January.

Commentators note that the official widely tipped for the Washington job was less enthusiastic about Brexit than Johnson or some members of his team.

"There have been reports that Mark Sedwill, the current cabinet secretary, is being lined up for the position," The Guardian's diplomatic editor Patrick Wintour wrote.

But Trump "may be suspicious of Sedwill, and would prefer a true Brexiter".

Wintour wrote that Sedwill "may not fill that bill, but Nigel Farage -- who pretty openly campaigned for the job before Darroch's appointment in 2016 -- does."

Farage has met Trump on several occasions and has brandished his anti-EU credentials by leading his Brexit Party to victory in European elections in May.

Farage on Monday called Darroch's memos "pretty irresponsible" even as he played down his interest in the job.

"I'm not a diplomat, and I think that's quite an understatement," he told BBC radio.

But Farage added that he "could be very useful" in forging a better relationship "with an administration that contains friends of mine."