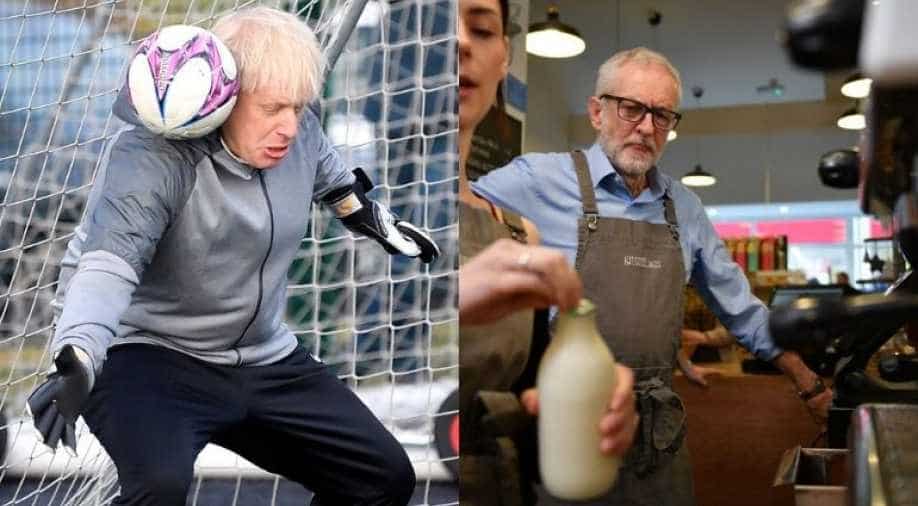 Leaders are leaving no stone unturned to win the hearts and minds of the people of the United Kingdom.

Britain's main political party leaders are continuing to push their election pledges to voters, as the campaign enters its final stretch.

Ahead of Thursday polls, the candidates were seen travelling around the country in a bid to shore up support and spread their election messages.

From cosplaying a Football Goalie to a Barista, these leaders are leaving no stone unturned to win the hearts and minds of the people of the United Kingdom.

In the latest move, to woo the Indian origin voters, Boris Johnson visited a Swami-Narayan ‌temple in London at the occasion of a traditional Hindu festival. He offered prayers and spoke to community leaders, children and addressed an audience.

Johnson also spoke on strengthening ties with India under the leadership of Prime Minister Narendra Modi.

A day after the Conservative Party announced its plans to invest $706 million for a bid to host the 2030 World Cup, Johnson himself entered the football field to play around with children in the city of Cheadle.

Meanwhile, the main opposition party leader Jeremy Corbyn did a 'Barista style' campaign in Wales Bakery, where he handed out cookies and made the famous Welsh espresso for the customers at the bakery shop.

Jeremy Corbyn also visited a primary school in Peterborough and interacted with the kids and the staff. Corbyn's visit came just a day after the Labour Party announced to cap class sizes to 30 and recruit nearly 20,000 extra teachers over five years.

Leader of the Liberal Democrats Jo Swinson tried her hand at tennis during a campaign event in Shinfield.

According to a panel-based survey in the UK, the polls show Johnson's governing party well ahead of Labour.

The survey shows the Conservatives extending their lead slightly over the opposition party to nine points, up from eight a week ago.

Johnson, who renegotiated a new divorce deal with the European Union in October, has promised to get Brexit done, a pitch he has constantly repeated during all his campaigning to try to win over supporters who backed Brexit, and those who are simply fed up of the political haggling over the issue.

In 2016, Britons had voted by 52 per cent to 48 per cent for Brexit but Parliament has been stuck in a deadlock for almost three years now.

If Johnson wins the majority, Britain will leave the European Union by January 31, 2020, and then seek to secure a trade deal with the bloc by the end of 2020, as per Johnson's plans and promises.