Turkey offers US joint Syria operation, without the Kurds 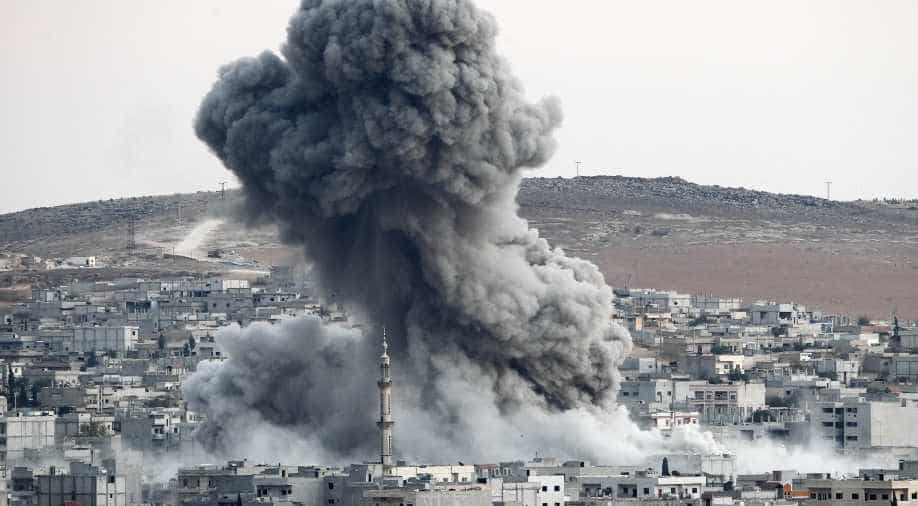 urdish fighters in Syrian city of Kobani have pushed back Islamic State militants in a number of locations as U.S. airstrikes on ISIS positions continue in and around the city. Since mid-September more than 200,000 people from Kobani flee into Turkey Photograph:(Getty)
Follow Us
Turkey is offering to "join forces" with Washington for a special operation inside Syria on condition it doesn`t include a Syrian Kurdish militia blacklisted by Ankara but seen as an ally by the US, the foreign minister said.
Washington`s support of Kurdish fighters in Syria in the fight against Islamic State jihadists has angered Ankara, especially after AFP pictures last week revealed US commandos sporting patches of the Kurdish People`s Protection Units (YPG) detested by Turkey.
"If we join forces, they (the US) have their own special forces and we have our special forces," Foreign Minister Mevlut Cavusoglu told a small group of journalists in the Mediterranean resort of Antalya.
Such a coalition could "easily" head to IS` de facto capital in Raqa to the south in a second front, he said.
There was no immediate reaction to the proposal from the United States, whose strategy for fighting jihadists inside Syria is pinned on its alliance with the  Syrian Kurds.
The US is supporting an alliance of Kurdish and Arab fighters-- the Syrian Democratic Forces (SDF)-- as the most effective fighting force on the ground against IS.
But the SDF is still dominated by the YPG, which Turkey sees as the Syrian branch of the Kurdistan Workers Party (PKK) which has fought a three decade insurgency against the Turkish state.
Cavusoglu said Syrian Arab opposition forces opposing the regime of President Bashar al-Assad could be backed up with special forces from Turkey, the United States as well as from France, Britain and Germany.
"The subject we are discussing with the Americans is the closure of the Manbij pocket as soon as possible... and the opening of a second front," Cavusoglu said, referring to a backdoor border route favoured by IS for smuggling jihadists into and out of Syria.
"We say okay, a second front should be opened but not with the PYD," he said, referring to the Democratic Union Party, the YPG`s political wing. "Unfortunately, both Russia and the United States see a terrorist organisation as a partner and support it," he added.
In Ankara, government spokesman Numan Kurtulmus declined to comment on details of any operation, but said Turkey placed top priority on protecting a line stretching between Syria`s flashpoint towns of Marea and Jarablus.
"Turkey is determined whatever is needed to protect the line from terrorist groups," he said on Monday after a cabinet meeting.The dispute over the role of the YPG has proved a major bone of contention in relations between the two NATO allies. Turkish President Recep Tayyip Erdogan at the weekend accused the US of dishonesty.
Cavusoglu lamented the delay in the delivery of American light multiple rocket launchers to be deployed along its border with Syria to combat IS.
The High Mobility Artillery Rocket System (HIMARS) was supposed to be deployed along the Turkish border by the end of May, but Cavusoglu said it would now only happen in August.
"The United States is unfortunately not keeping its promise," he said. "We are completely ready. Not us, but the US is responsible for the delay," he added.
The system would allow Turkey to hit IS positions within a 90-kilometre (56-mile) range, while Turkish artillery has a more limited range of 40 kilometres.
Yet Turkish cooperation is critical for the US-led fight against IS, with coalition war planes using the southern Turkish base of Incirlik as a hub for attacks on the group.
Cavusoglu said US support for YPG was "very dangerous" for the future of Syria.
Asked if could have implications for the US use of Incirlik, he replied: "The United States is our NATO ally, model partner. To be honest, we don`t want the business to reach that stage."