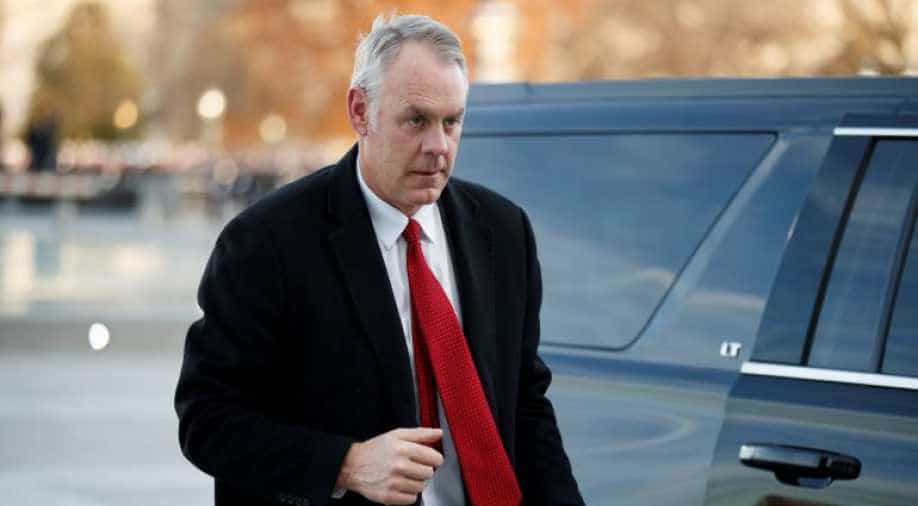 US Secretary of the Interior Ryan Zinke arrives at the US Capitol prior to the service for former President George H. W. Bush in Washington, DC, USA, 03 December 2018. Photograph:( Reuters )

Dozens of White House aides -- from attorney general Jeff Sessions to press secretary Sean Spicer to chief of staff Reince Priebus -- have either left or been sacked from their posts since Trump took office on January 20, 2017.

Interior Secretary Ryan Zinke will be leaving by the end of the year, US President Donald Trump announced Saturday. That will make him the latest top official to exit the US leader's circle of close advisers.

Dozens of White House aides -- from attorney general Jeff Sessions to press secretary Sean Spicer to chief of staff Reince Priebus -- have either left or been sacked from their posts since Trump took office on January 20, 2017.

Here is a sampling of senior departures:

Zinke, a former Navy SEAL and ex-member of the House of Representatives, was one of the main executors of Trump's efforts to reduce environmental protections in the United States.

He managed to hold onto his post for some two years despite a series of scandals over expenditures, including reports that his department was spending nearly $139,000 to upgrade three sets of double doors in his office -- a cost he later said he negotiated down to $75,000.

Zinke has also faced criticism over costly US Park Police helicopter flights last year that allowed him to return to Washington for a horseback ride with Vice President Mike Pence, and several other flights on non-commercial aircraft.

Kelly, a retired four-star Marine Corps general, has been credited with helping restore a degree of order to the often-chaotic Trump White House.

But in the process, he clashed with members of the Trump clan, and at times infuriated Democrats with his blunt comments.

Trump, who once said he wanted his aide to stay with him until the presidential election year of 2020, had made it clear of late that the relationship had chilled.

"At some point, he's going to want to move on," the president said in mid-November.

Indeed, Kelly, 68, made it known he did not always love the job -- one of the most vital in any White House, quipping, "God punished me, I guess."

Sessions, a Republican senator from Alabama, was the first member of the Senate to back Trump's insurgent bid in 2015 for the Republican presidential nomination.

After winning the presidency, Trump rewarded Sessions by naming him to head the Department of Justice.

But relations between the two quickly soured after Sessions recused himself from Special Counsel Robert Mueller's probe into whether the Trump presidential campaign colluded with Russia to get him elected.

Trump personally attacked Sessions on several occasions for failing to protect him from the Mueller probe.

"I don't have an attorney general," Trump told Hill.TV in an interview in September. "It's very sad."

The former South Carolina governor was also unafraid to speak her mind, often in fairly undiplomatic language, and built a reputation for standing up to Trump when she felt it was warranted.

Her aggressive criticism of Russia won plaudits, even as she stepped beyond the position held by the White House.

Her resignation announcement last month sparked speculation about her political future, though she denied any plans to challenge Trump in 2020, saying she would remain loyal to the president.

Environmental Protection Agency head Scott Pruitt's tenure was beset by scandal, and Trump pushed him out in July.

A former Oklahoma attorney general with ties to fossil fuel industries, Pruitt was accused of using his position to enrich his family's lifestyle in violation of federal law.

Rex Tillerson was fired by Trump in March, ending a rocky tenure for the former Exxon chief executive as the nation's top diplomat.

Tillerson was frequently at odds with the mercurial president. They notably disagreed on the Iran nuclear deal, from which Trump withdrew in May.

During his brief stay at Foggy Bottom, Tillerson frequently found himself out of the loop and caught unawares by policy shifts announced in Trump tweets.

In one of his first public criticisms of the president since stepping down, Tillerson told a gathering in Texas earlier this month that Trump was undisciplined, did not like to read briefing papers and sometimes asked him to do things that were illegal.

Trump shot back on Twitter that Tillerson was "dumb as a rock."

The architect of Trump's nationalist-populist campaign and his election victory, White House chief strategist Steve Bannon was nicknamed the Prince of Darkness and the Shadow President.

His economic nationalism became the lynchpin of Trump policies, even as many of Bannon's other ideas were rebuffed by policy rivals.

Bannon's constant clashes with other advisors became untenable, as did his ties to the extreme right. Bannon left in August 2017.

Michael Flynn, a retired lieutenant general, was being investigated for his contacts with Russians and eventually pleaded guilty to lying to the FBI.

He lasted only 22 days as the national security advisor.

He never really clicked with the president, who bristled at McMaster echoing the US intelligence establishment consensus that Russia meddled in the 2016 election.