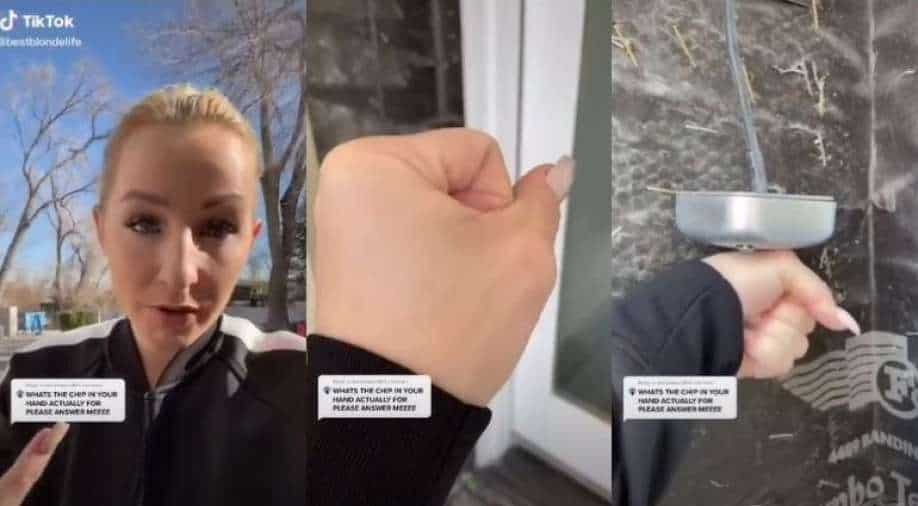 The 'Chip Girl' shows working of the chip in her hand (Pic Courtesy: YouTube). Photograph:( Others )

In some videos uploaded on YouTube, a woman can be seen getting a chip implanted to open electronic doors. The videos have gone viral. The woman calls herself ‘Chip Girl’ in the clip. She can be seen walking up to the sensors and waving her hand with the chip to open locks

In today’s technologically advanced world, anything is possible. You just need to imagine. This holds true for microchips, which can now be installed for several purposes.

The instances of microchips being injected into one’s body in spy-related thriller movies, seem to have become real now as a woman recently got a chip implanted in her hand to unlock doors and cupboards without keys.

In some videos uploaded on YouTube, the woman can be seen getting the chip implanted, and also use it to open electronic doors, etc in her house. These videos, which have gone viral, have left netizens puzzled.

A popular TikToker known as “Chip Girl”, She shared a video of herself getting the RFID chip implanted on June 25, 2020.She claimed to have a chip implanted in her hand to unlock electronic doors and cupboards in her house without using keys.

Is this the future? pic.twitter.com/5js1Xdeoxi

The woman, who calls herself ‘Chip Girl’ in the clip, can be seen walking up to the sensors and waving her hand with the chip to open locks.

The woman claims to have got RFID inserted in her hand. She also says it can be reprogrammed anytime.

In the clip, she says that her husband convinced her to do so. She gives complete demo of the way to open locks as well.

Also Read: House Speaker Pelosi thinks ‘a lot’ about what to do if she 'ruled the world'

The post on TikTok has garnered over 10 million views.