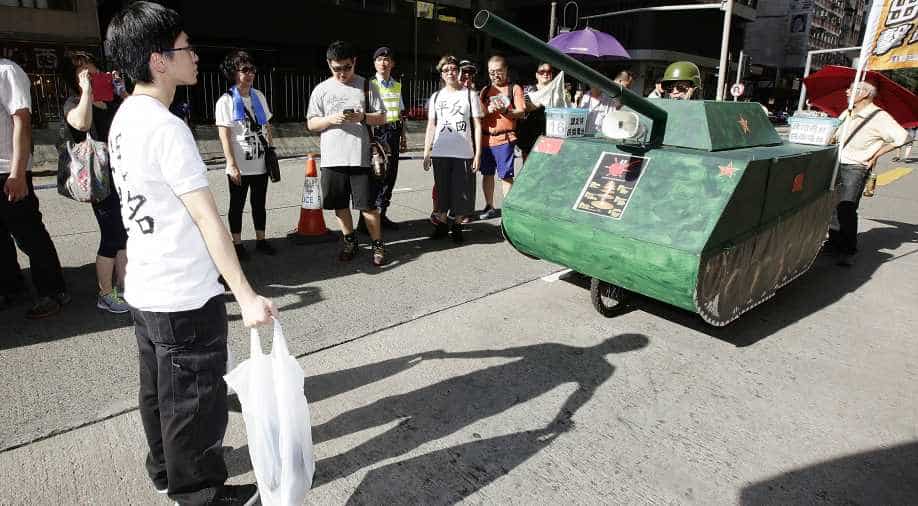 The march marked the 25th anniversary of the bloody crackdown on the student-led pro-democracy protesters in Tiananmen square by Chinese soldiers, also known as the Tiananmen Square massacre. (Photo by Jessica Hromas/Getty Images) Photograph:( Getty )

Yang Jianli is a Harvard fellow and president of the Washington-based Initiatives for China. Yang, who is a Chinese citizen with permanent resident status in the United States, was part of the 1989 pro-democracy Tiananmen Square protests. The protests were student-led, but had massive support from citizens. The protesters occupied Tiananmen Square in the heart of Beijing for seven weeks until the government ordered a military crackdown on June 4. Martial law had been imposed earlier. Tanks and soldiers armed with assault rifles marched on the protesters. When the protesters tried to stop their advance, the soldiers opened fire. Estimates vary, but between hundreds and thousands of people were killed in what came to be known as the Tiananmen Square massacre. Yang tells Ramesh Ramachandran that a repeat of 1989 is probable should public disenchantment with the Chinese government's policies grow. Edited excerpts from an interview:

What is your take on contemporary India–China relations? Does India's China policy satisfy you?

I can't say I am very happy with it, but I understand the concerns of the Indian government about its territorial dispute with China and the threat of terrorism from Pakistan, which has a good relationship with China. India is a large democracy and a neighbour of China. I wish and hope that India will take a more proactive role in propagating the ideas of universal values such as democracy to China and also be more forthcoming in supporting us when it comes to visas.

What is your position on Tibet?

Historically and contemporarily the situation in Tibet is very complex. Three principles guide us to work with Tibet:

* First, respect for the Tibetans' right to self-determination and that the future of Tibet should be decided by the Tibetans themselves.

* Second, we should be united to change China.

* Third, we should achieve our goal with non-violence.

The Arab Spring happened in 2011. Similarly, we have seen people's movements in Hong Kong (the Umbrella Movement) and Taiwan (the Sunflower Student Movement) in 2014. You participated in the Tiananmen Square protests of 1989. Do you think a Chinese Spring is probable?

It is, of course, probable. Ever since the Tiananmen Square protests of 1989 and the collapse of the erstwhile USSR, it has never been far from the Chinese leaders' minds. They have learnt from the experiences of dictators, be they Right wing or Left wing, to prevent people from coming together, to control society. With such high degree of control in China, people may not be able to do much, but I don't think they will continue this way for very long. Social unrest, people's resentment against the government, sickening pollution, glaring corruption, public disgust with information control, blatantly unjust detentions... all these things I think will get people to try to do something, to demand change. Eventually I don't think the Chinese government will be able to control such a society forever. So (a repeat of) 1989 is very possible.

Did the Tiananmen Square massacre of 1989 add to your disillusionment with the government of the day?

I was already disenchanted with the regime and the Communist party before the students' movement broke out in the spring of 1989.

How do you view the intersection of the foreign policies of India and the US vis-a-vis China?

The Indian government is leaning towards the US more than before. It is a good sign. The US is reflecting on its decades-old China policy. China might be the second largest economy in the world, but in terms of democracy it remains at the bottom. The US thought trade with China will bring about prosperity and democracy, but it did not happen. What went wrong? Decades of economic prosperity saw the Chinese middle class join the ruling elite class, but the economic and political elites are beginning to turn their back on President Xi Jinping. I think in five or 10 years China must have some big opportunity to change and I really hope that India, the US, and other democracies will not lose the opportunity to help the Chinese people to change China. When China becomes democratic, its government will become more responsible, more predictable. Therefore in terms of security a lot of countries such as India, the US, Japan, and the Philippines will become better off for sure.

?Social unrest, people's resentment against the government, sickening pollution, glaring corruption, public disgust with information control, blatantly unjust detentions... all these things I think will get people to try to do something, to demand change. Eventually I don't think the Chinese Government will be able to control such a society for ever, not for a long time. So 1989 is very possible.

How are contemporary domestic politics affecting the power dynamic in China?

A personality cult around President Xi has met with strong resistance within the party. His days will not be so easy. Four factors need to be present at the same time for real change in China:

* A general dissatisfaction with the government

* A viable democratic opposition which is not yet there

* A power struggle or cracks within the leadership (cracks will not be meaningful until some factions have different political views from others), and

We had almost achieved a revolution in 1989, but the international community did not recognise or intervene or give support to it.

How do you see the US-China relationship evolving under the next US President?

Republican or Democrat, the US can be expected to have a different foreign policy towards China. Whoever wins, the US will take a stronger position on security, trade and human rights. Compartmentalisation of policies did not work in the interest of the US. There is a need for an integrated approach.

In April you organised the InterEthnic InterFaith Leadership Conference at McLeodganj, India – the home of the Dalai Lama -- to which members of China's ethnic and religious minorities were invited. A few days before the conference, the visas of a few participants whom China sees as separatists were revoked. It is thought India cancelled the visas under Chinese pressure. How do you view India's refusal or cancellation of visas to people like Dolkun Isa, chairman of the executive committee of the World Uyghur Congress?

I am disappointed, but I understand that India is trying to find a balance between Chinese pressure and hosting the conference. One can't overlook the fact that India allowed the conference to be held without any incident. The criticism that the Modi government is weak is not fair. Policy-makers and the Modi government understand that advancing human rights and democracy in China is in the national interest of India.

Dolkun Isa is a peaceful person. He is not a terrorist. He is a citizen of Germany, which is a strong democracy. He travels freely to many countries, including the US. Any country can send a list (of persons it designates as terrorists) to Interpol but it does not mean that every country should accept it. India reacted to pressure from China which is understandable, but perhaps it overreacted. However, in the end, India allowed us to hold the conference which is very positive. We don't accept violence in any form. Some Uyghurs may have engaged in some kind of violent attacks, but those Uyghurs we work with are peaceful. We try to engage with some young people who have not abandoned violence. For example, some student leaders from Hong Kong were invited to the conference and spoken to about the principles of non-violence.