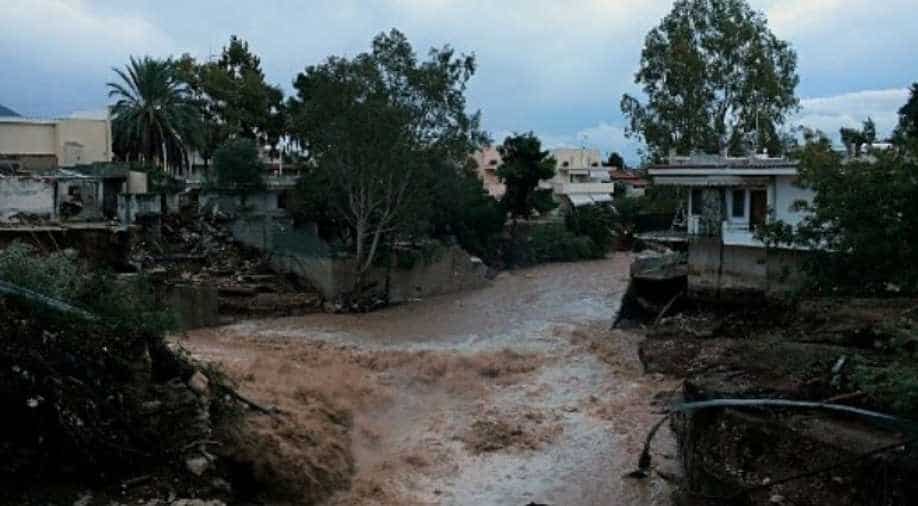 A photo shows damages in the town of Kineta, some 70 km southwest of Athens after torrential rains affected the area, cutting the road and train connection from Athens towards Peloponeese on November 25, 2019. VALERIE GACHE / AFP Photograph:( AFP )

Three people died in Greece on Monday as a storm front battered parts of the country, causing flooding and landslides

Three people died in Greece on Monday as a storm front battered parts of the country, causing flooding and landslides, officials said.

The bodies of two men were recovered after their yacht capsized and sank in the port of Antirion, near the city of Patras, a senior coastguard official told AFP. Antirion lies 200 kilometers (125 miles) west of Athens.

Moving eastwards, the storm then caused flooding in the Halkidiki peninsula and the island of Rhodes, where a disabled elderly woman died in her home, the fire department said.

Earlier Monday, flooding, and landslides at Kinetta, a seaside town 50 kilometers south of Athens, closed rail service and the motorway linking the capital to the Peloponnesian peninsula in the southwest.

Workers laboured through the day to clear the mud, stones and fallen trees the storm left in its wake. A fire destroyed much of the vegetation at Kinetta in 2018, making it more susceptible to landslides.

Strong winds also caused the cancellation of some ferry services linking the Cyclades islands from the ports of Rafina and Lavrion in the east and closed some ports in the northeast.

Dozens of houses were flooded and the emergency services said they had to evacuate some residents.

Flooding in the Attica region around Athens has become more frequent in recent years because of deforestation caused by wildfires.

In November 2017, a mudslide caused by heavy rains killed 23 people at Mandra, 50 kilometers west of the capital.