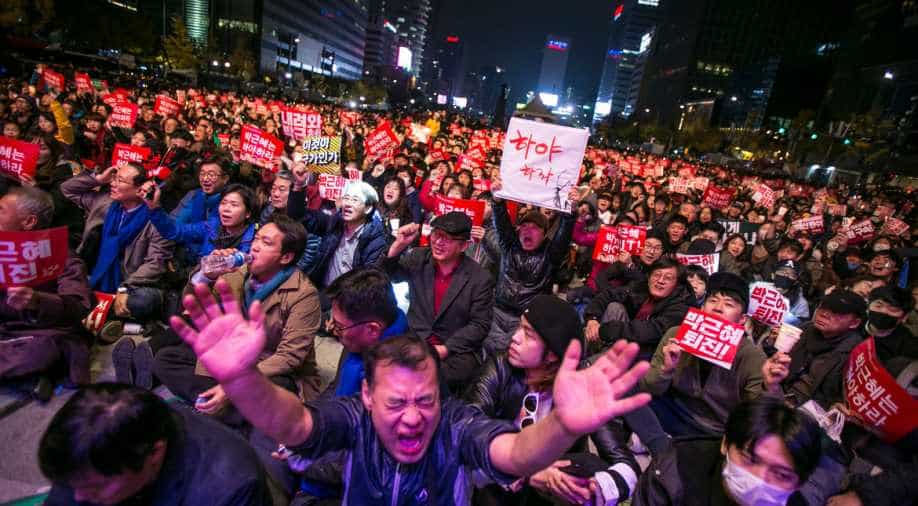 Park has seen her approval ratings plunge to a record low for a sitting president as top advisers and some of the most powerful companies in the country are caught up in the snowballing scandal. Photograph:( Reuters )

Thousands of protesters braved sleet and freezing temperatures in Seoul on Saturday to demand President Park Geun-Hye resign over a corruption scandal or face impeachment.

Police said 25,000 officers had been deployed across the South Korean capital and roads leading to the presidential Blue House had been blocked as organisers estimated up to 1.5 million people could attend the rally.

Another half a million people are expected to demonstrate in provincial cities.

"I don't think Park would step down voluntarily, but we need to raise our voice as much as possible to encourage parliament to push through with its move to impeach her," Lee Seung-Cheol, a 23-year-old student, told AFP.

There was a festive mood among protesters, who were wearing raincoats and clutching umbrellas to protect themselves against the cold and wet weather.

Food, placards and leaflets were being handed out, street vendors were selling candles and chairs, and some protestors were dancing to music being blared from loudspeakers.

"I came here because I wanted to show my children that people are the owner of this country, not the power holders," Shim Kyu-Il, a 47-year-old company employee, said.

The weekend rallies have been growing in size over the past month, attracting an estimated one million people two weeks ago, and are among the largest seen in South Korea since the pro-democracy protests of the 1980s.

So far they have been largely peaceful, with families, high school students, workers and farmers participating, chanting slogans and carrying candles.

Park has apologised over the influence-peddling scandal involving her long-time confidante Choi Soon-Sil, who has been arrested for fraud and abuse of power, but has defied calls to step down.

Choi is also accused of interfering in government affairs, despite holding no official position.

Park has seen her approval ratings plunge to a record low for a sitting president as top advisers and some of the most powerful companies in the country are caught up in the snowballing scandal.

Choi, 60, allegedly leveraged her relationship with Park to coerce donations from large conglomerates, including SK, Lotte and Samsung, to non-profit foundations which she set up and used for personal gain.

A parliamentary vote to impeach Park could take place as early as next week as a growing number of ruling party politicians back the opposition-led campaign to oust the president.