Thousands rally in Moscow against plan to demolish Soviet-era flats 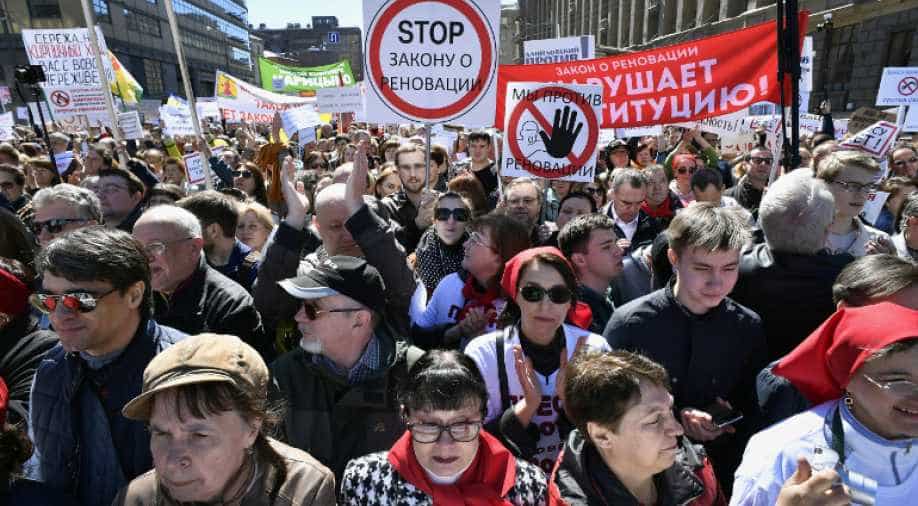 Demonstrators march during a protest in Moscow on May 14, 2017, against the city's controversial plan to knock down Soviet-era apartment blocks. Photograph:( AFP )

Thousands of people protested in central Moscow on Sunday against the city's plan to tear down Soviet-era apartment blocks as part of a controversial urban redevelopment programme.

The measure, announced in February by Moscow Mayor Sergei Sobyanin, prompted an outcry from many residents who see a ploy to funnel state funds into construction companies.

It would also ride roughshod over property rights, they say, while forcing many homeowners to move to neighbourhoods with lower property values.

Muscovites yelled "Hands off Moscow" and "No to demolition" while shouting down envoys from the office of the mayor, a staunch supporter of President Vladimir Putin who had served as his chief of staff.

"Let us keep our houses!" fumed Svetlana Ilyina, a 59-year-old engineer. "It's Sobyanin who should be demolished. This is in the interest of developers and the authorities who will receive huge kickbacks."

White Counter, an unofficial citizen group which places volunteers with counters at rally entrance points, put the turnout at just over twenty thousand.

"Me and my girlfriend live in a quiet, leafy neighbourhood, and now they want to deport us to a less prestigious neighbourhood," said Pavel Kuznetsov, 38, whose home is in one of the buildings slated for demolition.

"I felt anger, and that's putting it lightly," he told AFP.

Moscow and most other Russian cities have thousands of the prefab five-story buildings built in the 1960s and 1970s under Soviet leader Nikita Khrushchev.

The city's previous administration had overseen a program to move people from the most worn-out "khrushchevkas", as the buildings are known, to more modern housing.

But the current mayor is pushing for a more sweeping renovation program that would require extensive amendments to current zoning restrictions and other laws.

Supporters say the extensive project, initially valued at some 3.5 trillion rubles ($61 billion, 56 billion euros), would allow the city to replace the small, worn-out buildings with high-rise housing in the fast-developing capital of 12 million, which faces a housing crunch and rising rents.

A relevant bill passed parliament in a first reading but stalled after the outcry from apartment owners, which quickly escalated into a political issue.

Many opposition figures have supported the protest against the bill, with Alexei Navalny, a leading Putin critic who is campaigning for the presidency, visiting the rally on Sunday before he was led away by police as the crowd shouted, "We're with you Navalny!"

Rossiya 24 state TV meanwhile aired a programme touting the mayor's plans, while making no mention of the protest.

One of the mayor's aides, Anastasiya Rakova, tried to address the protesters Sunday but her voice was drowned out by shouts of "Shame" and "Stop lying!"