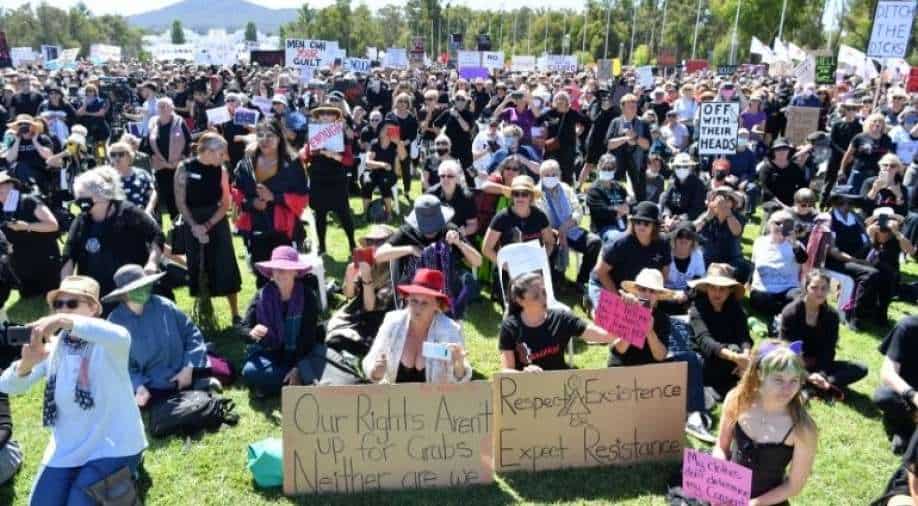 Protesters rally in response to the treatment of women in politics following several sexual assault allegations, as part of the Women's March 4 Justice rally in Canberra, Australia, March 15, 2021 Photograph:( Reuters )

The March 4 Justice rallies have been spurred by a recent wave of allegations of sexual assault, discrimination and misconduct in some of Australia`s highest political offices

Thousands of women gathered in major cities across Australia on Monday to take part in rallies calling for gender equality and justice for victims of sexual assault.

The March 4 Justice rallies have been spurred by a recent wave of allegations of sexual assault, discrimination and misconduct in some of Australia`s highest political offices.

Organisers expect around 85,000 women to join the marches, including one in the capital of Canberra where two petitions demanding action will be delivered to parliament.

A delegation of organisers rejected an invitation to meet with Prime Minister Scott Morrison in private.

"We`ve come to his front garden," Janine Hendry, one of the organisers, told Reuters outside Parliament House. "We are 200 metres from his office and it`s not appropriate for us to meet behind closed doors especially when we are talking about sexual assault which does happen behind closed doors."

A spokesman for Morrison said there was a standing offer for a private meeting and declined to comment further.

Recently reported scandals include rape allegations against Attorney-General Christian Porter, who has strongly denied the alleged 1988 assault, saying it simply did not happen.

The public anger over the government`s handling of alleged incidents of sexual assault mirrors the sentiment on display in London over the weekend, where protests were held following the killing of 33-year-old Sarah Everard, who disappeared while walking home at night-time.

Among protesters gathered in Canberra, one held a sign reading: "Shatter the silence. Stop the violence."

The allegations involving people in Morrison`s government are expected to dominate parliamentary proceedings over the next two weeks.

Both Porter and Defence Minister Linda Reynolds - who has been criticised for failing to report an alleged rape of one of her former staff members by another - are both on sick leave.