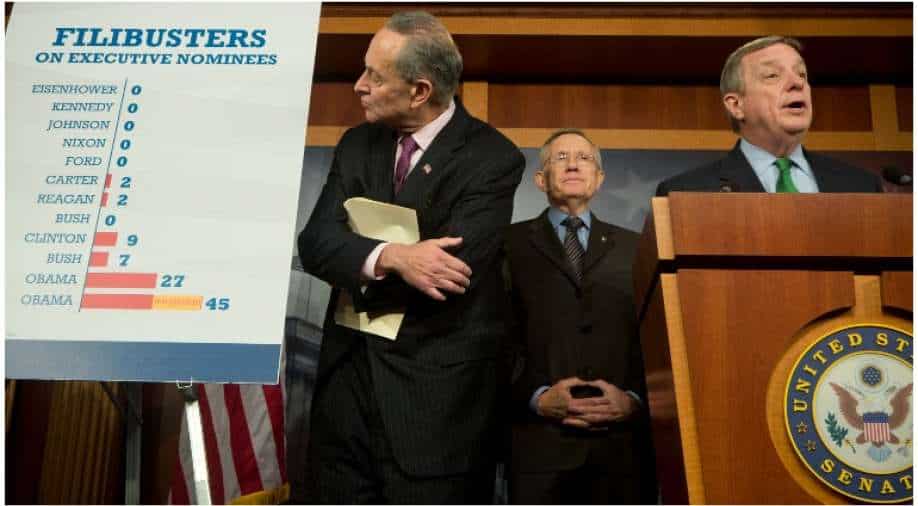 FILE — From left: Sen. Chuck Schumer (D-N.Y.), then-Senate Majority Leader Harry Reid (D-Nev.) and Sen. Dick Durbin (D-Ill.) during a news conference about filibusters on Capitol Hill in Washington, Nov. 13, 2013. President Joe Biden has signaled support for a return to a more old-fashioned way of filibustering, which is sometimes referred to as the talking filibuster. Photograph:( The New York Times )

Some Democrats have called for abolishing the filibuster, a procedural tactic that essentially makes it impossible to pass legislation without a 60-vote supermajority

If the filibuster did not exist, Senate Democrats could use the hair-thin majority they won in January to pursue an ambitious legislative agenda.

Some Democrats have called for abolishing the filibuster, a procedural tactic that essentially makes it impossible to pass legislation without a 60-vote supermajority.

They lack the votes to do it. But this week, President Joe Biden signalled support for something else: a return to a more old-fashioned way of filibustering.

“I don’t think that you have to eliminate the filibuster; you have to do it, what it used to be when I first got to the Senate back in the old days,” the president said in an ABC News interview. “You had to stand up and command the floor, and you had to keep talking.”

The president’s comments came after a Democratic senator who opposes ending the filibuster, Joe Manchin of West Virginia, told an interviewer he was open to making the procedure “a little more painful.”

The tactic Biden referred to, sometimes called a talking filibuster, is the kind illustrated in the 1939 movie “Mr. Smith Goes to Washington,” in which the title character, portrayed by Jimmy Stewart, takes a stand against corruption by sermonizing on the Senate floor until he faints.

In the real-life chamber, where proceedings are often bogged down by bureaucracy behind the scenes, filibusters can drum up public drama.

They can be policy-focused, as when Sen. Bernie Sanders, the Vermont independent who caucuses with the Democrats, railed for eight hours in 2010 against tax breaks for the richest Americans. And they can be irreverent, as when Sen. Alfonse D’Amato, R-N.Y., sang a Gene Autry song in 1992 during a 15-hour speech as part of an effort to keep a typewriter company from moving hundreds of jobs to Mexico.

Before the Civil War, the filibuster was used to protect the interests of slaveholding states. And in the 20th century, conservative Southern Democrats repeatedly used filibusters to block civil-rights legislation, including an anti-lynching bill.

Since then, senators from both parties have used marathon speeches to challenge majority rule on issues including gun control, judicial nominees and health care.

But colorful, marathon speeches are increasingly rare. The Senate began modifying the rules in the 1970s, when senators became concerned that talking filibusters reflected poorly on the Senate and endangered the health of older members. Today, the mere threat of a filibuster is enough: Senators can keep contentious measures from reaching the floor just by registering their objections privately.

It can be a test of stamina

An early practitioner of the dramatic filibuster was Sen. Huey Long, D-La., who fought against provisions of President Franklin Roosevelt’s New Deal.

In one 1935 speech, lasting more than 15 hours, Long read from the Constitution and shared recipes for fried oysters and pot liquor. He was foiled by a 4 a.m. bathroom break. (To hold the floor, you have to be present on the floor.)

In 2010, when Sanders used a filibuster to protest the Obama administration’s plan to continue the tax policies of former President George W. Bush, his monologue lasted eight hours. Sanders, fueled by oatmeal and coffee, felt his legs cramping and his speech growing hoarse.

“I was afraid that after two or three hours I’d have nothing more to say or I’d be tired or have to go to the bathroom,” he said afterward. “But I was pleased.”

One of the most memorable performances of the past decade came from Sen. Ted Cruz, R-Texas, in 2013. It was a procedural tactic and not technically a filibuster, but it might hint at things to come with so many presidential aspirants in the chamber.

In a bid to defund the Affordable Care Act, Cruz spent 21 hours blasting politicians in “cheap suits” and “bad haircuts,” praising the hamburgers at White Castle and even reading some of his daughters’ favorite stories, including “Green Eggs and Ham” by Dr. Seuss.

That same year, Sen. Rand Paul, R-Ky., used a real filibuster to delay the nomination of John Brennan to lead the CIA. Paul said his real goal was to get the Obama administration to say that it would not use drone strikes against American citizens on U.S. soil.

After 13 hours, he yielded the floor.

“I’ve discovered that there are some limits to filibustering,” he said, “and I’m going to have to go take care of one of those in a few minutes here.”

Tradition? Or a ‘Jim Crow relic’?

Critics of the filibuster note that its most significant use was to impede progress on civil rights for Black people. Last year, former President Barack Obama called the tactic a “Jim Crow relic” as he gave a eulogy for John Lewis, the Georgia congressman and civil rights pioneer who died in July.

Southern Democrats used the filibuster to block or delay anti-lynching measures in the 1930s, bills outlawing employment discrimination in the 1940s and other civil rights legislation in the 1950s and ’60s.

“The fights over filibuster reform for most of the 20th century were intricately tied to its impact on civil rights,” said Sarah A. Binder, a senior fellow at the Brookings Institution and a professor of political science at George Washington University.

The record-holder for the longest solo filibuster remains Strom Thurmond, the segregationist senator from South Carolina who gave a 1957 speech lasting more than 24 hours, sustaining himself on sips of orange juice, pieces of hamburger meat and bits of pumpernickel.

Thurmond and other Southern Democrats failed in that attempt to block the bill, but they used their clout on other occasions to stall other civil rights changes. In 1964, despite a 14-hour filibuster by Sen. Robert Byrd, D-W.Va., President Lyndon Johnson won passage of a civil rights bill with bipartisan help. Thurmond became a Republican, but Byrd remained a Democrat, serving 51 years.

His successor, Manchin, counted Byrd as a mentor and said he would do his best to follow in his footsteps in preserving Senate traditions. Today, he wields outsize influence as a centrist Democrat in an evenly divided chamber, making his position on filibuster rules critical.

How the filibuster started as a loophole and evolved

The filibuster was not something the Founding Fathers of the United States had envisioned.

In the late 18th century, both the Senate and the House had rules allowing majorities of their members to cut off debates and bring measures to a vote. But in an 1806 effort to clean up its rule book, the Senate scrapped that regulation.

The filibuster was an unanticipated outcome of that procedural change, Binder said.

In 1917, amid bitter debates over U.S. participation in World War I, the Senate adopted the cloture rule, allowing two-thirds of the senators to close debates and bring a measure to a vote.

The Senate made further changes in the 1970s, including reducing the supermajority requirement to 60 votes, from 67, and allowing more than one pending bill on the floor simultaneously. The changes permitted the Senate to move on to other business while theoretical debates on blocked items continued indefinitely and essentially rendered talking filibusters obsolete — except for dramatic effect.

At the time, Democrats held a commanding majority, but the margins have narrowed, with Republicans taking control for extended periods.

In 2013, Senate Democrats had the upper hand, 53-45, and ended the minority party’s ability to filibuster most presidential nominees after years of frustration over Republicans’ blocking of Obama’s choices for federal judgeships and Cabinet posts. They left the filibuster for Supreme Court nominees untouched.

Then they lost control of the Senate. Four years later, when Republicans held both the presidency and the Senate, they voted to lower the threshold for advancing Supreme Court nominations from 60 votes to a simple majority.

But the supermajority rule remained unchanged for legislation, to the frustration of President Donald Trump, who unsuccessfully lobbied Sen. Mitch McConnell of Kentucky to use his power as majority leader to scrap the filibuster.

In the first months of Biden’s administration, Republicans have yet to use the rules to block any of his legislation, but battles are on the horizon. Some Democrats argue that filibuster reform is the only way to overcome united Republican opposition to pass a voting-rights bill or laws to bolster labor rights or to reform immigration policy.

McConnell, who in January tried and failed to extract a pledge from Democrats to leave the filibuster alone, defended the status quo in dramatic terms Tuesday, warning of a “scorched earth” response if Democrats should dare to “break the Senate.”