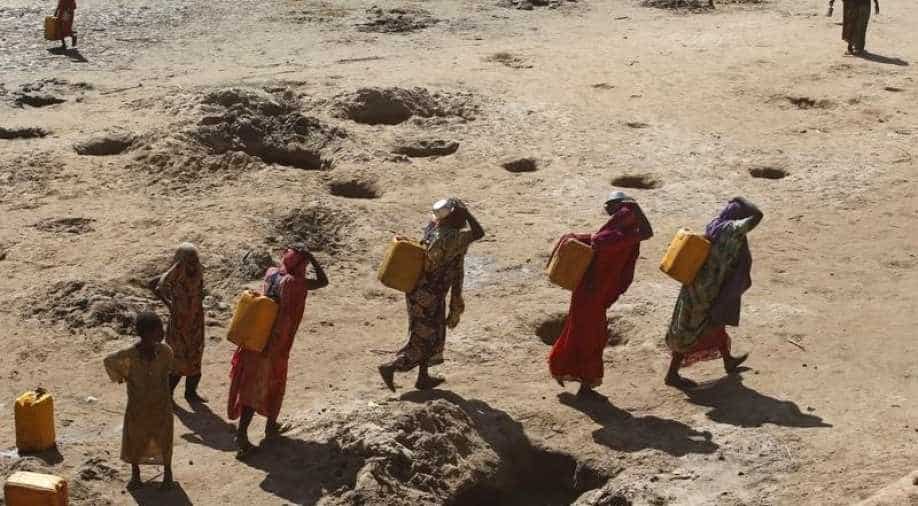 Women carry jerry cans of water from shallow wells dug from the sand along the Shabelle River bed, which is dry due to drought in Somalia's Shabelle region, March 19, 2016. Photograph:( Reuters )

At least 17 million women and girls in Africa collect water every day, which increases their risk of sexual abuse, disease and dropping out of school, a study published recently has found.

It is one of the first studies to calculate how many women and children were responsible for water collection in Africa, the researchers said.

Using datasets from the World Bank, the UN children's agency UNICEF, and the US Agency for International Development, researchers found that around 3 million children and 14 million women collect water in sub-Saharan Africa.

"The absolute number of adult females affected by this practice was a shock to me," Jay Graham, lead author of the study, told the Thomson Reuters Foundation.

"I knew it would be large... but I didn't realise it would be that high," added Graham, who is professor at the Milken Institute School of Public Health at the George Washington University.

People also have to contend with water-borne diseases like schistosomiasis, an infection caused by parasitic worms living in fresh water, he said.

Across all 24 countries examined, including Sierra Leone, Malawi and Niger, more girls were tasked with water collection than boys. Women were also the primary water collector in all countries.

Children are pulled out of school for the daily task, and many women cannot earn an income because of the time and energy it takes to collect water, Graham said.

Since they often need to walk long distances to find water, women and children are also at a higher risk of sexual abuse, he added.

In a statement issued last month, the Human Rights Commission of Sierra Leone said drought was putting even more pressure on children to find water.

"Children, particularly girls, are out in the street very late at night or as early as 4a.m. in search of water," the statement read.

"This heightens their vulnerability and contributes to increase in teenage pregnancy, child labour, high rates of school drop outs, and poor school performance," it said.

Demand for water is expected to increase by 2050 as the world's population is forecast to grow by one-third to more than 9 billion, according to the United Nations.

As climate change strengthens, drought is becoming more frequent and severe in southern Africa, and that – combined with this year's El Nino phenomenon – is taking a heavy toll on rural lives and economies.

"With climate change, it's going to be more of an uphill battle," said Graham. "If there's focused attention on it and resources, we can improve upon the situation but I do think it's going to become more difficult."

But it also crucial to address gender inequality and to recognise the unpaid labour that women do across the globe, he said, which he believes is the underlying issue.

"There is a need to address cultural values and really shifting the belief that women and men are equal too."