The body collector of Spain: When migrants die at sea, he gets them home 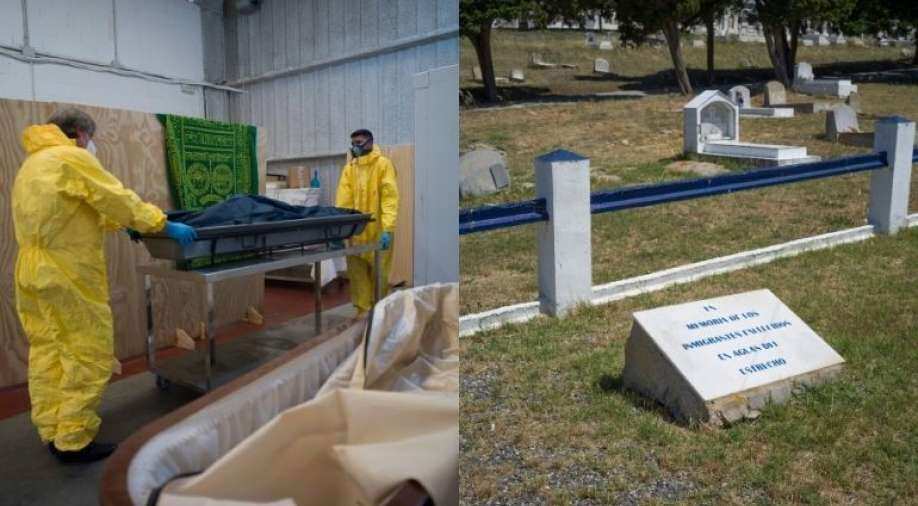 Martin Zamora and his son Martin Jr prepare the body of a migrant, who drowned in the Mediterranean Sea, at their mortuary in Algeciras, Spain. And a mass grave with a stone that says “In memory of the migrants who died in the waters of the Strait” at the cemetery in Tarifa, Spain. (Pic Courtesy: Samuel Aranda/The New York Times) Photograph:( The New York Times )

Zamora, owner of Southern Funeral Assistance, a mortuary in Algeciras, has become body collector of those migrants who don’t make it to Spain alive. The 61-year-old owner has repatriated more than 800 bodies in two decades

No one knew the man’s name when he washed ashore. His body had floated in the ocean for weeks, and it then sat much of the summer unidentified in a refrigerator in a Spanish morgue.

He was one among thousands lost at sea during what has been a record year for migrant drownings in Spain. And he might have been sent with the other unclaimed dead to an unmarked grave if Martín Zamora had not figured out that the body had a name, and a life.

He was Achraf Ameer, 27, a mechanic from Tangier. He had been missing for weeks when Zamora reached his family by WhatsApp. He had found their son’s body. He could bring it to them in Morocco, for a price.

“Sometimes, I get the feeling that some years ahead — in 30, 40, 50 years, I don’t know how many — they will look at us like monsters,” he said. “They’ll see us all as monsters because we just let people die this way.”

Zamora, a 61-year-old father of seven, is the owner of Southern Funeral Assistance, a mortuary in Algeciras. But in this port city where the lights of Morocco can be seen across the Mediterranean, he has become more than that. Zamora is the body collector of those who don’t make it to Spain alive.

Zamora, who says he has repatriated more than 800 bodies in two decades, has forged a business model like few others. He wrestles with municipal officials to hand over bodies so he can embalm them. He works contacts with smugglers to find the people the remains belong to, and has made scores of trips to make contact with them, his last, to Morocco, in the month before the pandemic.

For families who had given up their loved ones as missing, Zamora’s work can offer a kind of closure they had lost all hope for.

But his services come at a steep cost — he charges $3,500 or more to get a body home. No Spanish agency will pay for what he does, and the profit margins of the work are low, he says. And so it leaves him in the gray zone, not uncommon in border towns like this, between the will to do good and the need to make a living.

“My next worry is finding the money,” Zamora said. “The family has nothing.”

Spain is witnessing a devastating procession of migrants drowning at sea.

During the first six months of the year, 2,087 people died or went missing trying to make it to the country’s shores, including 341 women and 91 children, according to Caminando Fronteras, a nongovernmental group that tracks the deaths. The International Organization for Migration, a United Nations body that keeps a more conservative count, has recorded more than 1,300 deaths so far this year.

Helena Maleno Garzón, who heads Caminando Fronteras, said Spain’s situation was especially perilous because it is the only European country with smuggling routes on both the Atlantic and the Mediterranean. “These include some of the most dangerous routes which are now being used,” she said.

Dozens of boats have gone down this year near the Canary Islands, a Spanish archipelago off West Africa. In May, others perished swimming around a border fence that extends into the sea at Ceuta, a Spanish enclave in North Africa encircled by Morocco.

Migrant boats also are tempted by the narrowness of the Gibraltar Strait, only 9 miles wide in one section, despite strong currents that sink many boats. Some drown only hours after leaving Africa, their bodies later washing ashore on beaches in Spain’s southern region of Andalusia.

The Spanish media sometimes carry stories about the latest bodies. Then, when the headlines recede, Zamora’s work begins.

The World We Live In

The body is the mystery. The clothes are often the only clues.

“It can be hard to identify someone’s face,” Zamora said. “But a shoe, a jersey, a T-shirt — suddenly a family member will recognize it, because it once was a gift.”

His first clue came in 1999, when he found a note inside the clothes of a dead Moroccan man. Back then, the government was outsourcing to funeral homes the job of burying unclaimed remains in a field alongside the local cemetery.

Zamora was on call when that body and 15 others were discovered on the beaches. He brought the corpses back to his mortuary and discovered the damp note with a phone number in Spain.

He called and a man on the other end of the line claimed to know nothing. But a few days later, Zamora recalled, the same man called back and admitted he was the brother-in-law of the young man who had drowned.

“I told him, ‘I’ll make you a deal: I’ll charge you half the price to get the body home, but you have to help me look for the rest of the families,’” Zamora said.

The man agreed to guide him to the region in southeastern Morocco where his brother-in-law had lived. Zamora first took care of the body of the young man, embalming it and sending it back to Morocco. Then he got permission from a local judge to take the clothes of the other dead migrants to Morocco.

Zamora and the relative went from village to village, carrying a large rack on which they hung the clothes of the dead migrants, along with rings and other personal effects, which they took to markets where they knew people would go.

After two weeks they had identified the remaining 15 relatives and repatriated every body.

Zamora realized he had a solution to what had been seen as a lost cause in Spain. Yet it costs thousands of euros to repatriate the bodies. And the families that he was meeting had far less than he did.

“You find the family, you get the father and the mother, they take you to where they live and you see it’s a tin shack on the side of a mountain with two goats and a rooster, and they tell you they want their son back,” he said. “What do you do? Be a businessman or be sentimental?”

Mohammed El Mkaddem, an imam at the mosque in Algeciras which makes collections for the families of the dead, said he understood Zamora’s constraints. “In the end, they run a funeral home and it’s a business,” said the imam. “But they do what they can, and we’re thankful for it.”

José Manuel Castillo, the director of the city morgue in Algeciras, said Zamora filled a gap left by the authorities. “Someone has to take care of the paperwork and the repatriation of the bodies, and if it’s Martín Zamora, that is great,” he said.

Even in the heat of southern Spain, Zamora wears a tie and loafers, looking more like a lawyer than an undertaker. On a recent afternoon, he was working on a body with his son, Martín Jr., 17.

“They found him in his work clothes,” Martín Jr. said of the corpse. “Maybe he went straight from work into the boat.”

The boy wandered off for a moment, and Zamora began to speak, almost to himself. His son was 15 the first time they worked together, after a boat carrying 40 people capsized off the coast of Barbate, just north of Algeciras, leaving 22 dead.

He was afraid his son would have nightmares, but Martín Jr. wanted to work, he said.

“No father wants his son to see these things,” Zamora said. “But this is the world we live in.”

A Mechanic From Tangier

Just before the summer, Zamora said he received a WhatsApp message from a man who identified himself as Yusef and said he worked at a mosque in the city of La Linea, across the border from the Rock of Gibraltar.

“There were two boys we don’t know if they are alive or dead — surely they are dead,” began the voice message. “The family was looking everywhere and I said we would ask someone we know who is involved in this kind of thing.”

The next message contained a picture of three men in a dinghy with homemade life vests, taken moments before they left Morocco. One was Achraf Ameer, the illiterate mechanic from Tangier.

With that, Zamora contacted the local authorities, who had a body in the morgue. They gave Zamora’s photographs of the man’s clothes, and Zamora — helped by Yusef — located Ameer’s sister in Tangier and showed her a photo of the clothes. These days, Zamora rarely needs to make the trips to Morocco that he used to, making identifications from afar.

She said her brother had tried once before to cross into Spain, only to be deported. This time, he didn’t tell anyone but left cryptic hints when the family began making plans to move to a new home.

“He was always telling us: ‘I won’t be living with you in the new house,’” Soukaina Ameer recalled.

He left on April 13, she said, his boat likely sinking the same night. His body floated in the sea for much of April before it came ashore around the end of the month. For the rest of the spring and part of the summer, it was placed in a morgue, where it deteriorated from not being frozen.

And so on a sweltering day, Zamora loaded Achraf Ameer’s body into his hearse and, with his son, drove past pines and sunflower fields. The body was wrapped in blankets from the Red Cross, which had found him. A hospital tag was affixed to one leg. At the mortuary, Zamora and his son arrived dressed in hazmat suits and began embalming.

Ten pumps from a long needle into Ameer’s shoulder. Another 10 into his chest. After an hour, Zamora wrapped the body in a shroud which he covered in a green cloak and sprinkled it with dried flowers, re-creating a Muslim rite that an imam had once shown him. Then he shut the lid on the coffin and he and his son took off their hazmat suits. The two were covered in sweat.

In the adjoining room sat stacks of case files, people whose bodies Zamora was still trying to locate after their relatives had gotten in touch with him. There was an Algerian man, born in 1986. There were two Moroccans who had been lost at sea; and a Syrian man, who once had a wife and lived in Aleppo.

And there was a ringing from the other room, and with it, another possible lead.

“Martín, go get my phone,” Zamora said to his son, taking off his gloves.