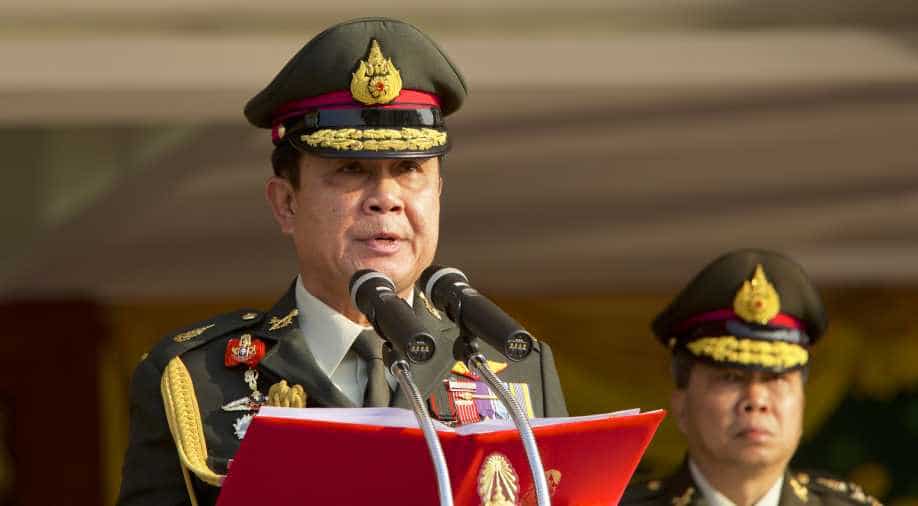 Follow Us
Thailand`s junta leader swatted away critics, vowing to stay in power despite "people's hatred" for him,  as tensions simmered before a referendum which the military says will pave the way for elections.
Prime Minister Prayut Chan-O-Cha seized power two years ago from the elected government when he was army chief, promising to heal a bitter decade-long political divide.
But his regime has curbed free speech, outlawed political activities and penned a new charter designed to entrench the military`s role in government.
"I won`t go anywhere as long as the country is not at peace and in order. I won`t leave, despite how much you hate me," Prayut, who is renowned for his often irate outbursts, said in remarks to a forum in Bangkok.
While he was speaking Wednesday morning a Thai folk singer was sentenced to seven and a half years in prison for royal defamation -- one of several harsh laws the junta has used to curb critics, especially on the Internet.
The singer, known by his stage name Tom Dundee, was convicted for comments he made in a 2013 speech at a political rally organised by supporters of the now-ousted government.
Prayut also defended the sweeping powers granted to him as junta chief, saying "there are still some politicians expressing their opinions".
On the surface the political climate has calmed significantly under the junta, following years of competing street protests that often turned deadly.
But disquiet is returning before an August referendum on the charter, despite a new law which punishes campaigning in the run-up to the vote with up to 10 years in prison.
The junta has promised elections will go ahead in 2017 but has not clarified what will happen if the charter is rejected in the referendum, raising fears the timetable will slip once again.
Prayut`s speech comes after the junta appeared to be loosening its grip by ending travel restrictions on many former politicians and promising to move its "attitude adjustment" sessions -- a common punishment for critics -- from military camps to government buildings and police stations.
Critics say the regime is bent on dismantling the powerful political network of former premier Thaksin Shinawatra, whose parties have long dominated the polls but are reviled by Bangkok`s military-allied elite.
Analysts say the political troubles are exacerbated by the failing health of the 88-year-old monarch Bhumibol Adulyadej as competing elites jostle for power before the succession.
Read in App