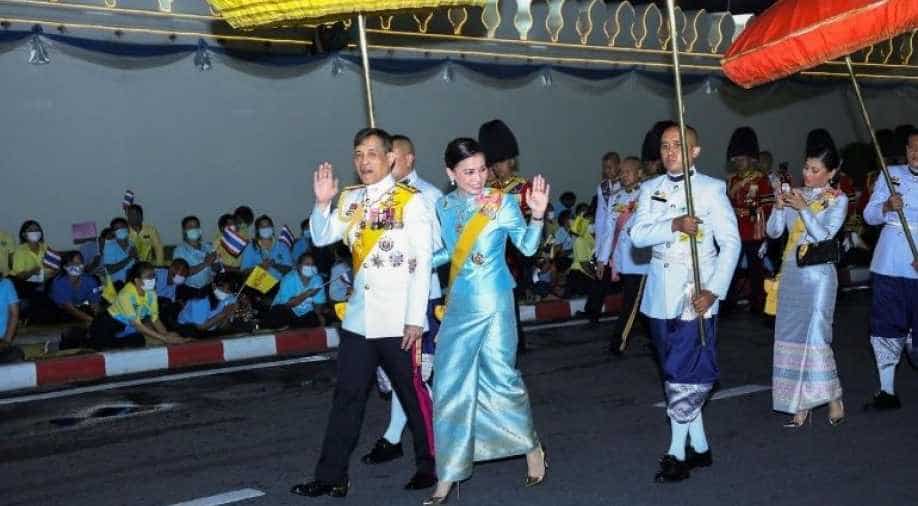 File photo: Thailand's King Maha Vajiralongkorn and Queen Suthida wave to well-wishers after a ceremony to celebrate the brithday of Queen Sirikit, the Queen Mother, near the Grand Palace in Bangkok, Thailand Photograph:( Reuters )

The number of lese majeste cases in Thailand has significantly increased in the past year.

Global rights bodies are up in arms with authorities in Thailand and want them to unconditionally drop `politically motivated` charges against children who peacefully express their opinions.

On Monday, the Central Juvenile and Family Court informed 17-year-old Thanakorn Phiraban that he has been indicted on lese majeste (insulting the monarchy) charges related to his speech at a pro-democracy rally on December 6, 2020, in Bangkok.

Under Thailand`s draconian Article 112 of the Criminal Code, Thanakorn faces three to 15 years in prison if found guilty.

"By punishing outspoken children with lese majeste charges, the Thai authorities are seeking to intimidate peaceful critics by demonstrating that they will all be harshly punished regardless of their age," said Brad Adams, Asia director at the Human Rights Watch.

"These senseless, rights-abusing charges should immediately be dropped against Thanakorn and all others peacefully expressing their views."

The number of lese majeste cases in Thailand has significantly increased in the past year.

Since then, officials have charged at least 82 people with lese majeste crimes in relation to various activities at pro-democracy rallies or comments on social media.

Six of them are children, under age 18.

In a February 8 statement on the situation in Thailand, UN human rights experts said that lese majeste laws have "no place in a democratic country".

They also expressed serious concerns about the growing number of lese majeste prosecutions and harsh prison sentences meted put by courts in Thailand to some defendants.

The International Covenant on Civil and Political Rights, to which Thailand has ratified, protects the rights to freedom of expression and peaceful assembly.

General Comment 34 of the Human Rights Committee, the international expert body that monitors compliance with the covenant, specifically states that laws such as those for lese majeste "should not provide for more severe penalties solely on the basis of the identity of the person that may have been impugned" and that governments "should not prohibit criticism of institutions".

Children from middle and high schools have become commonplace at most pro-democracy rallies across Thailand, even giving speeches on stage.

Groups such as the Bad Students have held their own rallies on school grounds and occasionally conducted street protests.

But despite concerns publicly raised by the Unicef and human rights groups, the Thai authorities continue to punish children for expressing views, participating in peaceful public rallies, and otherwise taking part in activities to demand democratic reforms.

The Thai Lawyers for Human Rights has reported that at least 41 children have been charged for peacefully exercising their rights to freedom of expression and assembly since the youth-led pro-democracy rallies started in July 2020.

Many other children have faced various forms of intimidation by the authorities to try to stop them from taking part in political activity or making critical comments about the government and the monarchy.

The government`s actions violate Thailand`s obligations under the Convention on the Rights of the Child, which ensures children`s rights to participate in peaceful protests and to express their opinions.

"Thai authorities should not be suppressing the voices of Thailand`s children expressing their views and demanding democratic reforms," HRW`s Adams said.

"Instead of responding to children`s appeals with prosecutions, the authorities should listen to their views, and protect their rights to express their opinions without fear or intimidation."