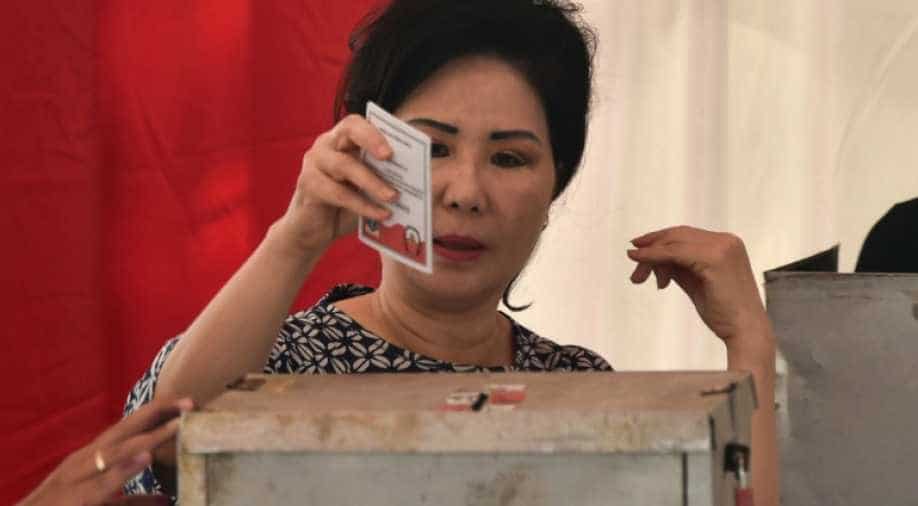 An ethnic-Chinese Indonesian casts her vote at a polling station during the final-round of the Jakarta governor election in Jakarta on April 19, 2017. Photograph:( AFP )

Indonesia's rights commission called on police to find the perpetrators, who it suspected were 'actors trained, organised and professional in using guns'. It did not elaborate

Ten people, including several teenagers, were killed in Indonesia's post-election riots, the human rights commission said Tuesday, as it accused police of beating up protesters.

In its final report on the May riots, the agency Komnas HAM said four victims were underage and most had been shot in the capital Jakarta and demonstrations in Kalimantan, Indonesia's section of Borneo island.

Indonesia's rights commission called on police to find the perpetrators, who it suspected were "actors trained, organised and professional in using guns". It did not elaborate.

"This is a tragedy," commissioner Beka Ulung Hapsara told AFP.

"These are unlawful killings -- or killings that took place outside legal mechanisms -- and that violates the criminal code," he added.

The commission said it did not suspect authorities were behind the shootings.

But it accused police of using unnecessary force against protesters, including minors.

"The police used violence against children who joined the rally (in Jakarta) during which they said that they were beaten and kicked when arrested," according to the report.

A Jakarta police spokesman declined to comment, saying that authorities had yet to see the agency's report.

Also Tuesday, police on the island of Sulawesi said a half dozen officers had been slapped with three-week suspensions for bringing guns to protests last month in Kendari city, where two students died.

"They (the officers) were found guilty of not following orders by bringing firearms" to the rally, said Southeast Sulawesi police spokesman Harry Goldenhardt.

The force did not accuse officers of killing the students.

The pair died amid nationwide protests against a host of divisive legal reforms, including banning pre-marital sex and weakening the anti-graft agency.

Hundreds were injured in the demonstrations with police also accused of brutality against protesters.