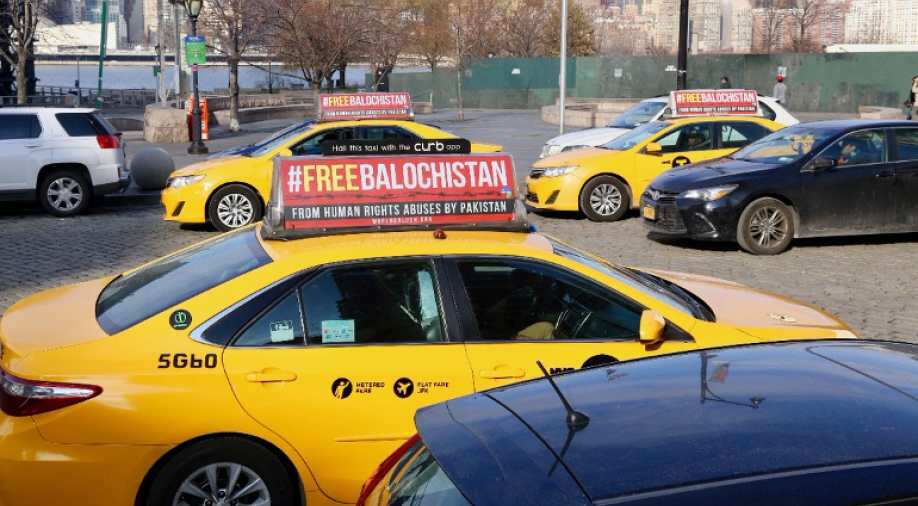 Reportedly more than 100 taxis are running with advertisements of the slogan '#FreeBalochistan from human rights abuses in Pakistan.' (Image source: @Andyrockz2012/Twitter) Photograph:( Twitter )

After running the "free Balochistan" campaign in London and Geneva, the World Baloch Organisation (WBO) has launched its human rights campaign in New York.

The World Baloch Organisation (WBO) has now launched its human rights awareness campaign in New York with more than 100 taxis carrying adverts with the slogan, "#FreeBalochistan from human rights abuses by Pakistan" pic.twitter.com/0z4zHRBCRb

Reportedly more than 100 taxis are running in New York with the slogan "#FreeBalochistan from human rights abuses in Pakistan."

The spokesperson for the World Baloch Organisation, Bhawal Mengal said: "Balochistan was annexed by Pakistan against the people's will in 1948 and has been under military occupation ever since, with mass kidnappings, torture, and executions by the Pakistan army. Pakistan wants to keep this hidden. We are doing this campaign to expose these abuses," ANI reported.

Bhawal Mengal urged the US to hold Pakistan accountable for its crimes and cut off all the military aid to Pakistan.

The campaign has been receiving support from around the world on social media.

I support #FreeBalochistan i will visit Balochistan in the 1st month of its independence. Jay ho Baloch brothers and sisters.

For as long as I've known the #Baloch, they've been trying 2 bring their grievances to the world stage & no one listens. Well, can you hear me now?! #FreeBalochistan #EnforcedDisappearances @UNHumanRights @theintercept @IntlCrimCourt #NYC @TheWarNerd pic.twitter.com/d9UEU9UtOV

Free Balochistan campaign kicked-off in #NewYork with more than 100 taxis carrying advertisements with the slogan, "#FreeBalochistan from human rights abuses by #Pakistan" against mass kidnappings, torture, exploitation, and executions by the Pakistan army for decades. pic.twitter.com/GhnNcKeydj

This is horrific....@UN has become a JOKE & paid agent of Saudi nexus...they will nt take any actions against atrocities committed by PAK on Baloch people...#FreeBalochistan https://t.co/ztypTJVJ6u