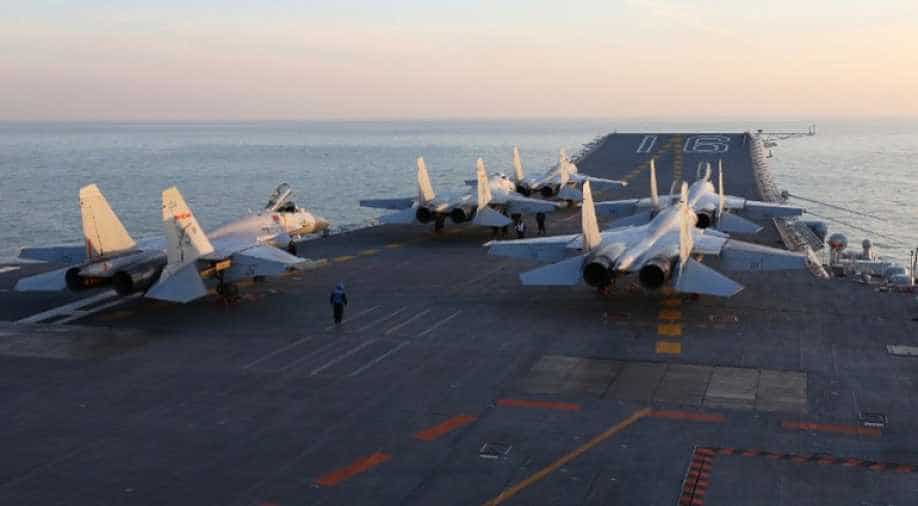 Taiwanese media said an unspecified number of F-16 fighter jets and warships were deployed in Taiwan's ADIZ to closely watch the Chinese warships. The ministry declined to comment. Photograph:( AFP )

Taiwan said today it was closely monitoring the movements of China's sole aircraft carrier and five other warships, which earlier passed south of the island on an exercise held amid worsening cross-strait relations.

The Liaoning and five escorts sailed 20 nautical miles outside Taiwan's air defence identification zone (ADIZ) in the Bashi Channel between Taiwan and the Philippines yesterday, the defence ministry said.

The ships continued sailing south-west after passing 90 nautical miles to the south of Taiwan's southernmost point Eluanbi Monday morning. They later travelled to the south-east of the Dongsha Islands in the South China Sea, the ministry added.

"The military has been on guard and fully monitoring the Liaoning. We urge the public to rest assured," it said.

Taiwanese media said an unspecified number of F-16 fighter jets and warships were deployed in Taiwan's ADIZ to closely watch the Chinese warships. The ministry declined to comment.

Japan's defence ministry said earlier that eight Chinese vessels, including the carrier and three destroyers, were spotted by one of its ships in the central part of the East China Sea on Saturday afternoon.

Chinese media has reported that the aircraft carrier was headed for the Pacific on exercise for the first time.

The navy drills are seen as a show of strength by Beijing at a time of rising tensions with Taiwan and the United States following a protocol-breaking telephone conversation between Taiwanese President Tsai Ing-wen and US President-elect Donald Trump.

It was the latest in a series of recent exercises staged by China, after its military aircraft passed near Taiwan on December 10 for the second time in a month.

China views self-ruling Taiwan as part of its territory awaiting unification, by force if necessary, even though the two sides split in 1949 after a civil war.