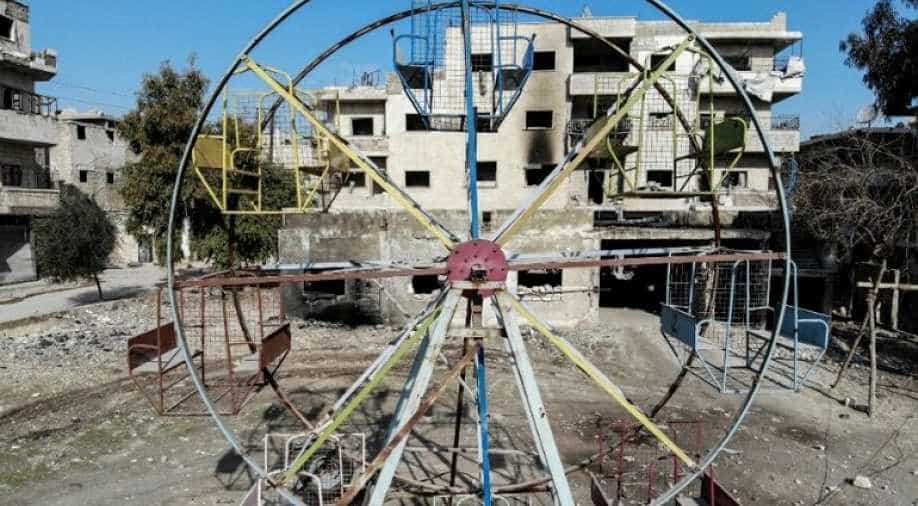 A drone picture taken on December 22, 2019 shows a deserted playground and damaged buildings in the town of Maaret Al-Numan in the northwestern Idlib province Photograph:( AFP )

The strikes targeted the village of Jubass near the town of Saraqeb in southern Idlib province, killing civilians sheltering in and near a school, the Syrian Observatory for Human Rights said.

At least eight people, including five children, were killed Tuesday in Russian airstrikes on a school in northwest Syria sheltering displaced civilians, according to a war monitor.

The strikes targeted the village of Jubass near the town of Saraqeb in southern Idlib province, killing civilians sheltering in and near a school, the Syrian Observatory for Human Rights said.

An uptick in attacks around Saraqeb over the past 24 hours has driven thousands of people out, the Observatory added.

The heightened regime and Russian bombardments on southern Idlib since December 16 have forced tens of thousands of vulnerable people to flee their homes, according to the United Nations.

Nearly 80 civilians have been killed by airstrikes and artillery attacks over that same period, according to the Observatory, which puts the number of displaced in recent weeks at more than 40,000.

The UN has called for "immediate de-escalation" and warned of further mass displacement if the violence continues in Syria's last major opposition bastion.

But Russian and regime airstrikes have continued to pummel the region as Damascus loyalists advanced on the ground.

Since Thursday, regime forces have taken control of dozens of towns and villages in southern Idlib following battles with jihadists.

The clashes have killed 260 fighters on both sides, according to the Observatory.

"I did not expect to have to leave," said Abu Ahmad, poking his head out of the pick-up truck driving him and his family towards a camp for the displaced.

"This is my home, this is where I grew up," the father of ten said.

It hosts some three million people including many displaced by years of violence in other parts of Syria.

The Damascus regime, which now controls 70 per cent of Syria, has repeatedly vowed to take back the area.

Backed by Moscow, Damascus launched a blistering offensive against Idlib in April, killing around 1,000 civilians and displacing more than 400,000 people.

Despite a ceasefire announced in August, the bombardment has continued, killing hundreds of civilians and fighters.

The latest spike in violence comes after Russia and China on Friday vetoed a UN Security Council resolution that would have extended for a year cross-border aid deliveries to four million Syrians, many of them in Idlib.

The move raised fears that UN-funded assistance could stop entering opposition-held parts of Syria from January unless an alternative agreement is reached.

Syria's war has killed over 370,000 people and displaced millions since beginning in 2011 with the brutal repression of anti-government protests.