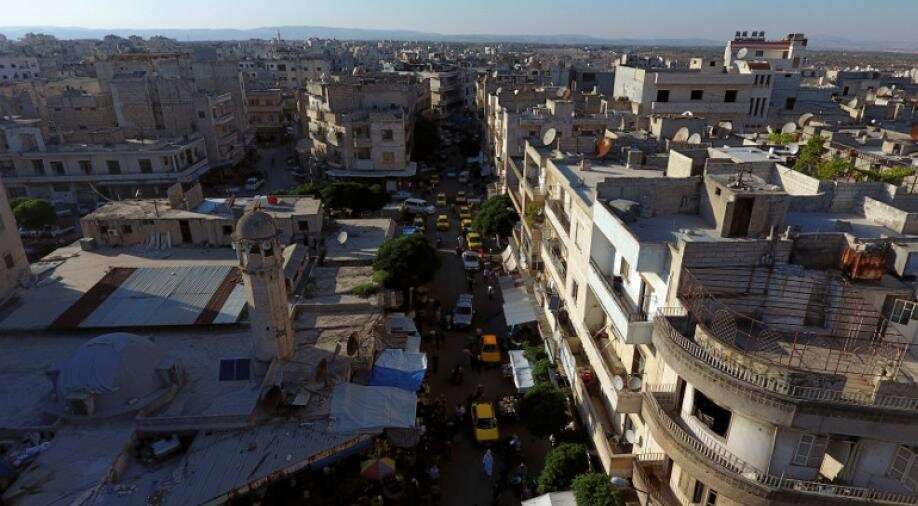 General view of the rebel-held city of Idlib, Syria, June 8, 2017. Photograph:(Reuters)
Follow Us

The deal agreed last month between Ankara and Moscow provides for the establishment of a U-shaped buffer zone around Idlib that would be free of both jihadists and heavy weapons.

A key rebel alliance in Syria's Idlib has said it was opposed to the deployment of Russian forces in a demilitarised zone to be set up under a Turkey-Russia deal for the opposition bastion.

The deal agreed last month between Ankara and Moscow provides for the establishment of a U-shaped buffer zone around Idlib that would be free of both jihadists and heavy weapons.

The buffer would be patrolled by Turkish troops and Russian military police.

The National Liberation Front, a powerful Turkish-backed rebel alliance in Idlib, cautiously welcomed the deal but has since raised objections.

"A long meeting was held with our Turkish ally regarding the elements of the agreement, and chiefly the issue of Russia's presence in the buffer area," NLF spokesman Naji Mustafa said late Sunday.

"We discussed the issue, and the NLF took a clear position rejecting this matter," he said, adding that Turkey "pledged that it would not happen".

The accord over Idlib was reached on September 17 by Russian President Vladimir Putin and Turkish counterpart Recep Tayyip Erdogan in the Russian resort town of Sochi.

Under the agreement, all factions in the planned buffer area must hand over their heavy weapons by October 10 and radical groups must withdraw by October 15.

Mustafa's statement on Sunday was the latest indication of continued divisions and confusion over the accord.

The Syrian Observatory for Human Rights monitor said Sunday that an NLF faction known as Faylaq al-Sham had begun pulling out its heavy weapons from three towns in the planned zone.

Both Faylaq al-Sham and the NLF denied the withdrawal to AFP.

"There have been no changes in the location of weapons or redistribution of fighters, even as we remain committed to the agreement reached in (the Russian resort of) Sochi," said Sayf al-Raad.

Idlib lies on the border with Turkey and is held by a complex array of rival rebel and jihadist factions, which observers expect will complicate the buffer zone's creation.

Most of the territory where the buffer would be set up is held by Hayat Tahrir al-Sham, a jihadist-led alliance, and other hardliners.

HTS has yet to officially comment on the deal, but its chief Abu Mohammad al-Jolani has previously warned that rebel weapons were a "red line".

Hurras al-Deen, a smaller Al-Qaeda-linked group, has rejected the agreement.