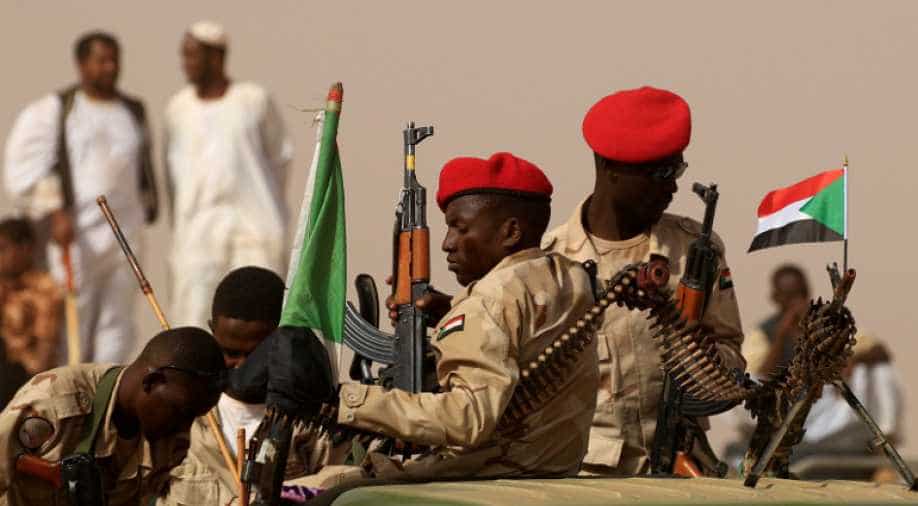 Paramilitary Rapid Support Forces (RSF) soldiers secure the area as they wait for the arrival of Lieutenant General Mohamed Hamdan Dagalo, deputy head of the military council and head of RSF. Photograph:( Reuters )

A probe into a deadly June raid on a Khartoum protest camp revealed Saturday that a feared Sudanese paramilitary group was involved in the crackdown that killed scores and sparked international outrage.

Shortly before dawn on June 3, gunmen in military fatigues raided the site of a weeks-long sit-on outside army headquarters, shooting and beating protesters in an operation that also left hundreds wounded.

Demonstrators and rights groups had accused the paramilitary Rapid Support Forces of carrying out the crackdown, a charge denied by the group's powerful chief, General Mohamed Hamdan Daglo.

But a joint probe by prosecutors and the ruling military council revealed on Saturday that RSF paramilitaries were involved in the raid.

Crowds of protesters had camped out at the site from April 6 onwards, initially to seek the army's support in toppling longtime leader Omar al-Bashir.

Bashir was ousted on April 11, but protesters pressed on with the sit-in, demanding that the military council which replaced him cede power to civilians.

Fatah al-Rahman Saeed, a prosecutor who headed the investigation, said orders had been given to security forces to clear an area called Colombia, near the protest camp.

But, he said, an RSF general had separate ordered a colonel to disperse the sit-in, despite having no such order from further up the chain of command.

"They led the forces... inside the sit-in area and ordered them to get down from their vehicles and whip the protesters," Saeed told reporters.

Saeed identified the RSF general who allegedly ordered the raid by his initials A.S.A., and the colonel as A.A.M.

"It is clear to the committee that General A.S.A issued an order to Colonel A.A.M to deploy anti-riot forces of the RSF" to break up the sit-in, Saeed said.

The country's ruling generals have insisted they did not order the dispersal of the protest camp, but had ordered an operation including RSF and other security forces limited to clearing Colombia, citing drug dealing and violence in the area.

"The area had become a security threat which forced the authorities to take proper measures to clear it," Saeed said on Saturday.

Saeed said an RSF captain, identified as H.B.A, was involved in clearing Colombia but later took part in dispersing the sit-in.

He said another group of security personnel who were also involved in clearing Colombia "disobeyed orders and entered the sit-in area".

They "removed barricades, fired tear gas and fired intense and random bullets that led to the killing and wounding of protesters and the burning of tents," Saeed said.

Days after the raid, rights group Amnesty International said that members of "RSF are responsible for... the ongoing bloody crackdown on protesters in Khartoum since 3 June".

"The RSF swept into protest sites and opened fire on unarmed people," it said.

Doctors linked to the protest movement say 127 people were killed during the raid.

Authorities have given several tolls, all of them much lower.

The sit-in raid caused the collapse of talks between protest leaders and Sudan's ruling generals, which did not resume until weeks later, after intense mediaton by African Union and Ethiopian diplomats.

The two sides have now agreed to form a joint civilian-military ruling body for a transitional period of 39 months.

This governing body would then install an overall civilian administration as demanded by demonstrators, who still insist on a separate independent investigation into the June 3 raid.

Although the generals and protest leaders have signed a power sharing deal, several issues are still pending -- including justice for demonstrators killed since the first December protests against Bashir.