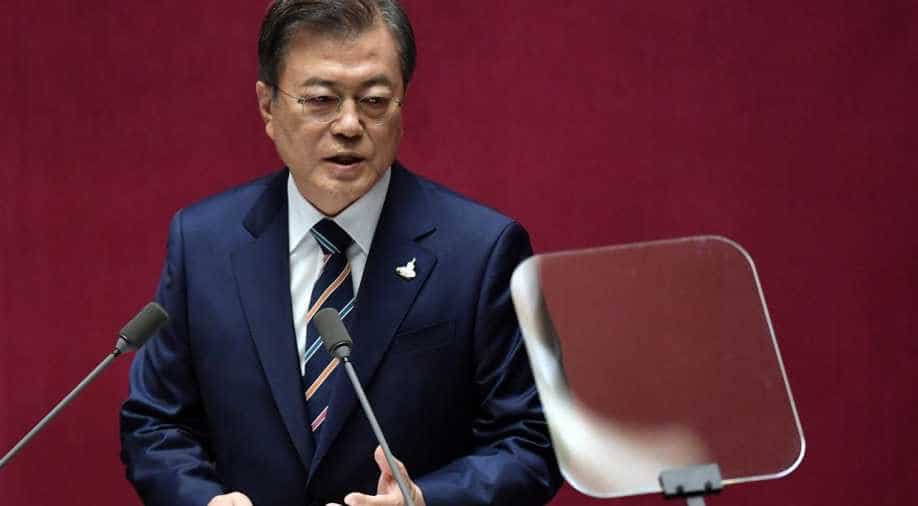 The comments figured in a recorded message to a 100-strong gathering of activists, government officials, and others in the city of Cheonan to commemorate the victims of Japanese wartime sexual violence.

President Moon Jae-in vowed on Friday to spotlight the plight of South Korea's last few surviving "comfort women", as those forced to work in Japan's wartime brothels are known, in efforts to resolve a dispute with its neighbour over the thorny issue.

The comments figured in a recorded message to a 100-strong gathering of activists, government officials, and others in the city of Cheonan to commemorate the victims of Japanese wartime sexual violence.

It was the third such memorial day, instituted by Moon's government in 2018, after effectively abandoning a 2015 pact between Japan's Prime Minister Shinzo Abe and Moon's predecessor that had aimed for compensation for the women and an apology.

"The most important principle of resolving the problem is 'victim-centrism'," Moon, who has called the deal flawed for failing to fully reflect the desires of the survivors, said in Friday's remarks.

The event was held on a smaller scale than some in the past, hit by worries over the spread of the coronavirus, recent heavy rain, and a finance scandal in the activist community.

Lee Yong-soo, one of those prominent among the surviving comfort women, whose numbers have dwindled to just 17 now, urged survivors not to lose heart over the scandal.

"Don’t be angry," said Lee, speaking from a wheelchair. "There are people who are making efforts to resolve the (comfort women) issue. Please keep them healthy and give them happiness."

Lee, who has accused the longtime leader of an activist group of politically and financially exploiting victims, called for a halt to its weekly protest rallies outside the Japanese embassy in Seoul.

The group's former leader, Yoon Mi-hyang, has denied any wrongdoing but apologised for causing controversy.
Ties between Seoul and Tokyo have long been strained by disputes dating from Japan's 1910-1945 colonial rule over the Korea peninsula.

Last year Japan put curbs on exports of high-tech materials to South Korea after a court in its neighbour ordered Japanese firms to pay compensation to Koreans forced to work for them during the war.

Relations with Japan are expected to figure once again in an independence day speech by Moon set for Saturday.
The day is also the anniversary of the end of World War Two, when Abe is expected to send a ritual offering to Japan's Yasukuni Shrine, where wartime leaders convicted as war criminals by an Allied tribunal are honoured along with war dead, though avoiding a personal visit.